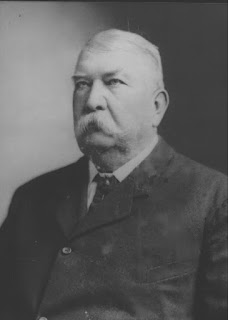 Robert Adrian Van Cleave was born in Hinds County, Mississippi, in 1840. Prior to the Civil War, Van Cleave moved to Yazoo County, where he joined the Confederate army in the spring of 1862. After serving for a time in Capt. William Gartley’s company of cavalry, Van Cleave joined Co. I, 1st Mississippi Light Artillery, also known as Bowman’s Battery. A private, the young soldier participated in all the actions of the unit throughout the Vicksburg Campaign and surrendered with the army at Vicksburg. When the war ended, Van Cleave returned to Yazoo County and married Eliza Sheppard in 1865, and then the couple moved to Ocean Springs two years later. In their adopted home, Van Cleave became one of the most influential men in town.

Van Cleave was drawn to the area because of relatives who were active in business and real estate. Following in their footsteps, R.A. Van Cleave established a store in a rural section of Jackson County along Bluff Creek. Although the business failed, he was respected enough that the community was later named Van Cleave (though spelled ‘Vancleave’). After failing to establish a business in the county, Van Cleave moved to Ocean Springs proper, where he started a mercantile business in the 1870s. The R.A. Van Cleave Mercantile Store (not exactly a creative name) was a one-story frame building.  At the same time (in 1872), he was appointed as Postmaster, despite the fact that he was a staunch Democrat and his appointment came during the Grant administration (locals claimed there were simply no qualified Republicans in the county). He served in this role for ten years, running the post office from within his store, which was located on Washington Avenue.  In 1881, the store was robbed. The robbery was foiled by a store clerk who was asleep in a back room. Awakened by the intruder, the clerk fired a pistol at the would-be thief. Although he missed, it was enough to compel the robber to flee the store, who escaped with $157.58 in postage stamps (in denominations of one, three and five cents each). Caught within a matter of days, the thief was convicted in Federal court in Jackson and sentenced to four years in the Southern Illinois penitentiary in Chester, Illinois. 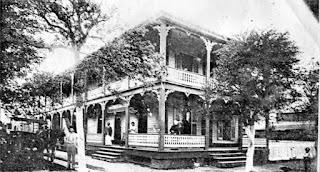 In addition to his mercantile business, Van Cleave started buying commercial property in Ocean Springs, especially lots near the railroad depot. In 1870, rail service arrived in Ocean Springs via the New Orleans, Mobile & Chattanooga Railroad, later purchased and operated as the L&N Railroad. It was near the depot that Van Cleave opened his store and built his family home, where he and Eliza raised seven children. He also built a hotel at the corner of Washington and Robinson. Opened in 1880, the Van Cleave Hotel (left) was a two-story wooden building with a wide gallery on two sides. According a contemporary newspaper ad, the hotel was “elegantly fitted up, and with large, well ventilated rooms lighted by gas,” all designed for the “accommodation of regular and transient boarders.” Between the opening of the hotel and the loss of the building in a fire in 1920, the hotel changed names numerous times. It was called, at various times, the Meyer Hotel, Gillum Hotel, City Hotel, Frye Hotel, The Inn Hotel, Iberville Hotel, Commercial House and Commercial Hotel. Van Cleave no longer owned the hotel when it burned. 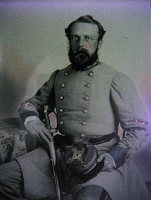 On September 9, 1882, Van Cleave had the honor to receive former Confederate President Jefferson Davis at his hotel. Davis was visiting Ocean Springs in order to review the Reichard Battalion and German Guards of New Orleans, a unit of the Louisiana state guard which had come by train for the festivities. Col. Augustus Reichard was a native of Germany who immigrated to the United States in 1845. A cotton dealer and slave-owner, Reichard (right) volunteered to raise German volunteers for the Confederate army and became colonel of the 20th Louisiana Infantry. In 1862, all of his property in New Orleans was confiscated by the hated Benjamin Butler. The next year, Reichard left the country and made his way to Egypt. He returned to New Orleans in 1868, and was later active in Confederate veterans’ organizations. Stopping at Beauvoir on the way to Ocean Springs, the guardsmen welcomed Davis and his daughter Winnie on board as the band played the “Bonnie Blue Flag.” Upon arrival in Ocean Springs, they were greeted at the depot by the Ocean Springs Fire Company, whose president happened to be R.A. Van Cleave. Marching in a heavy rain, the troops made their way to the Van Cleave Hotel, where Davis was received with a champagne brunch. Later, a military ball was held at the nearby Ocean Springs Hotel, owned by W.B. Schmidt. No doubt, the opportunity to receive Jefferson Davis in such grand fashion was a proud moment for the former Confederate private. 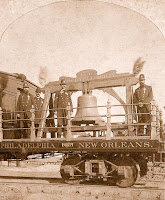 Another opportunity for fame presented itself three years later, although not nearly on the scale of grandeur as the Davis reception. On that occasion, the Liberty Bell was being moved by rail back to Philadelphia after being on exhibit at the World's Industrial and Cotton Centennial Exposition in New Orleans. Beginning the journey back on June 13, 1885, the Liberty Bell was transported via a special flat car (left), and was accompanied by the mayor of New Orleans and other city officials. Somehow, Van Cleave made arrangements for the train to make a quick stop in Ocean Springs. Wearing a “paper hat and wooden sword,” Van Cleave led a group of veterans to the depot, where they fired a “derelict cannon” and made a few speeches. It is hard to imagine that the august body escorting the famed Liberty Bell were impressed at all by the gesture. After a three-day journey by rail, the Liberty Bell was back home in Philadelphia. The trip to New Orleans was the first time the bell had ever been removed from Independence Hall. 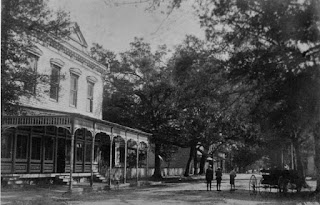 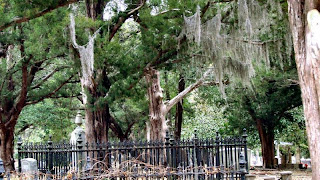 Besides being a respected and successful businessman, Robert A. Van Cleave was also called on to serve as Ocean Springs’ first (provisional) mayor, although his term, coming at the organization of the city government, lasted only a few months. Appointed mayor by a committee of citizens in June 1892 and approved by Mississippi Governor John M. Stone, Van Cleave decided not to seek reelection in the December election. After leaving the political scene and retiring from his various business interests, R.A. Van Cleave died in 1908 at age 68. He is buried in Ocean Springs’ Evergreen Cemetery alongside his wife, who died in 1912. The Van Cleave family continued to have a prominent role in Ocean Springs life. From 1894, when a new, two-story store (above right) was constructed, to 1926, the family’s mercantile business thrived. The R.A. Van Cleave & Son Company, specializing in “fancy groceries and feed of different kinds,” continued after R.A. Van Cleave’s death under the leadership of William S. Van Cleave, a son. Unfortunately, the store burned in 1926. William died in 1938, and is also buried in the Evergreen Cemetery (below right).