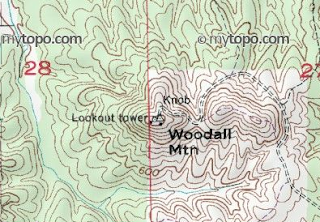 Mississippi is known for many things: great food, wonderful music, good literature, and warm, friendly folks, just to name a few. Our natural resources are abundant too – from agriculture to hunting and fishing, we pretty much have it all. One thing Mississippi does not have much of, however, are mountains. In fact, the tallest “mountain” we have would only qualify as a big hill in much of the rest of the country. But, it is what it is, and Woodall Mountain, located in the northeast corner of the state in Tishomingo County, is the highest natural point in Mississippi. At 807 feet, Woodall Mountain is located just south of Iuka, which is the Tishomingo County seat. At the top of Woodall Mountain is a National Geodetic Survey station disk and a small gravel area for those who wish to climb to the summit and enjoy the view. Until 1998, there was an observation tower on top of Woodall Mountain, but it was removed at that time. Several other peaks in the area are nearly as tall as Woodall, but the second highest elevation in Mississippi is way down south in Prentiss County, where Lebanon Mountain “soars” to a height of 794 feet. By comparison, the nation’s tallest peak is, of course, Mount McKinley at 20,320 feet above sea level. Overall, Mississippi ranks seventh from the bottom in average elevation. Delaware is the flattest state in the nation, just slightly lower than Florida and Louisiana in mean elevation. 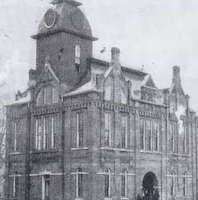 According to some accounts, Woodall Mountain was at one time known as Yow Hill. If so, the peak was likely named for George Yow (1828-1897),  who is buried in the nearby New Prospect Cemetery. Apparently, Mr. Yow was a patriotic chap (for the Confederacy, that is), as in 1862 he named his newborn son Jefferson Davis Yow. Many other members of the Yow family are buried close by, but about 1887 the hill was reclassified as a “mountain” and named for Zephaniah Harvey Woodall, Jr. (right), who served as sheriff of Tishomingo County from 1880 to 1892. It was during Woodall’s term that the county courthouse (left) burned. The fire consumed the upper floors of the structure, which was built in 1870 at a cost of $6,749, and was supposedly set by arsonists trying to destroy evidence in a murder case. The courthouse was rebuilt, retaining the bottom floor, and today serves as the headquarters for the Tishomingo County Historical & Genealogical Society.

Zephaniah Woodall was born in 1827 in Morgan County, Alabama, located in the north central part of the state. He was married three times (his first two wives apparently died, possibly during childbirth). By the time he married Rebecca Wynn in 1863, he had moved to Tishomingo County. That same year, he enlisted in the Confederate Army, serving in Co. B, 11th Alabama Cavalry. Also known as Burtwell's Cavalry, the regiment was composed of several consolidated companies of men from Alabama and Mississippi, among them Lt. Col. John Francis Doan of Iuka. The 11th Cavalry fought with Nathan Bedford Forrest in several late-war engagements in Alabama, including Sulphur Trestle, where Forrest's men captured a fort held by Federal troops. Fought on September 25, 1864, 200 Union soldiers were killed during the engagement, including the fort's commander. The rest of the garrison was captured and sent to prison, and many of these men died on board the ill-fated Sultana. The Sulphur Creek Trestle, interestingly, is considered by many to be the setting for Ambrose Bierce's short story "An Occurrence at Owl Creek Bridge," published in 1890. Bierce, a Union veteran, had been stationed at Sulphur Trestle earlier in the war.

Among those captured at Sulphur Trestle was another officer (left), the colonel of the 9th Indiana Cavalry. He was sent to a prison camp, where he remained for the rest of the war.  After being paroled, he returned to Indiana and then purchased a cotton plantation in Mississippi. Soon after arriving, however, his entire family came down with malaria, and his wife Emily died on August 20, 1866. Heartbroken, he returned to Indiana, leaving his plantation in the hands of a business partner. When his partner disappeared with what money remained in the failed plantation, he declared bankruptcy. Within ten years, however, he built a pharmaceutical company and become one of the wealthiest men in America. Today, the corporation which bears his name, the Eli Lilly Company, is among the top pharmaceutical companies in the world. 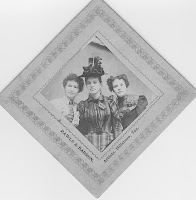 After his service in the Confederate army ended with the surrender of the 11th Alabama Cavalry in May 1865, Zephaniah Woodall returned to Tishomingo County and raised eleven children, most of them by his wife Rebecca Elizabeth, known as Betty. As noted earlier, he became the county sheriff in 1880. Col. John Doan, who also served in the 11th Alabama Cavalry, returned to Iuka and also married three times. He was the father of a dozen children, besting his old comrade Zephaniah by one. Then, as so many did in the years following the Civil War, the Woodall family picked up and moved west to Texas, settling in Hill County. There, the Woodalls lived the remainder of their lives, far away from the mountain which bore their name. On Christmas Day in 1900, Betty died, followed in 1910 by old Zephaniah himself. He and Betty and many of their children and extended family members rest today in the Hillsboro Cemetery, including daughters Ladie, Henrietta and Duanna, shown together in this photo (above). 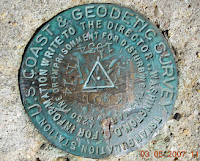 Back in Mississippi, the big hill is still called Woodall Mountain, even though the Woodalls headed west more more than a century ago. The hill has certainly seen it's share of excitement through the years, including the September 1862 battle of Iuka which took place a short distance north of its heights and was likely used as an observation post by Union Gen. William S. Rosecrans. Still in private ownership, Woodall Mountain was most recently owned by Robert L. "Bob" Brown, a successful Iuka businessman. Ironically, Brown, who passed away in 2011, moved to the highest point in Mississippi from the small Delta town of Sledge, a decidedly flat piece of ground.