Scandal in the Delta! 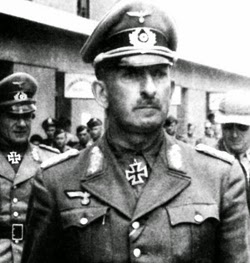 In May 1943, Axis troops in North Africa were defeated by Allied forces and taken prisoner. As a result, both German and Italian soldiers from the famous "Afrika Korps" were transported to the United States to prisoner of war camps, a number of which were located in Mississippi. There were four main P.O.W. camps in Mississippi during World War II, including Clinton and Como and at the military installations at Camp Shelby and Camp McCain. Of these, Camp Clinton was used to house higher-ranking German officers, including Erwin Rommel's replacement as the commander of the Afrika Korps, Gen. Jurgen Von Arnim (right). Officers, unlike enlisted men, could not be forced to work, although many chose to anyway. At Clinton, the Germans helped build a model of the Mississippi River for the U.S. Army Corps of Engineers to study flood control. In other parts of the state, however, work was chiefly agricultural in nature. That was especially true in the Delta, where there were ten satellite camps. Most of the prisoners in these camps found themselves planting and picking cotton. 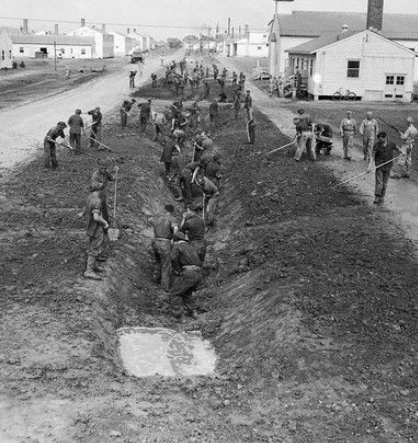 Among the German prisoners assigned to a work detail in the Delta was a Luftwaffe officer named Helmut von der Aue. Variously described being either six feet tall or 6'3", the 26-year-old pilot had been shot down and captured in Italy in September 1943. With dark hair, blue eyes and sporting a small mustache, von der Aue was not only considered handsome but was fluent in English, French and Italian, in addition to his native German.  After escaping from a prisoner of war camp in Italy, von der Aue was transported to the United States and sent to Camp Breckinridge in Kentucky (named for the former U.S. Vice President and Confederate general John C. Breckinridge). On January 18, 1944, he escaped while working on a road near the camp. After being recaptured, he was sent to Camp McCain, Mississippi, and thence to a smaller camp at Rosedale, where he was assigned to work on a plantation.

Along with several other prisoners, Helmut von der Aue was sent to work on a plantation owned by Joseph Henry Rogers near Beulah.  Joe Rogers was a 43-year-old planter and was apparently away from home on a regular basis tending to business matters.  His wife Edith, who at age 37 was five years younger than her husband, was described as "pretty." The couple had one daughter, Joan.  To pass the time, Edith frequently invited the German prisoners working in the fields to have lunch at her home.  Over a period of months, it seems, she developed a particular attachment to Helmut von der Aue, the tall, handsome pilot.  On one occasion in early January 1946, he stayed behind while the other prisoners returned to the fields. After he and Mrs. Rogers enjoyed a few drinks – and possibly as much as a fifth of whiskey – the two decided to escape together.  Before leaving, she furnished von der Aue with some of her husband’s clothes and then they took her car to Memphis.  When interviewed later, von der Aue claimed he was “tired of looking at fences, fences, fences,” but he also said he had fallen in love with Edith, who had been very kind to him. Although he said he was also fond of Joan, the couple did not take her with them. They left the Delta behind with $10 cash.

After heading to Memphis, the couple drove east all night with the intent to go all the way to Washington, where he hoped to find work with some acquaintances.  Arriving in Winchester, Tennessee, they realized they were quickly running out of money.  With only $3 remaining and a half-empty gas tank, Edith sold her watch for $5 to buy food and then wired some relatives in Rosedale for more money.  Continuing to Nashville, the couple tried to check into a hotel but was promptly arrested by the F.B.I., who had been alerted of the escape and no doubt knew the make and model of the car.  Mrs. Rogers was charged with “aiding and abetting the escape of an enemy of the United States” and held in the Nashville jail. Her bond was set at $2,000.  Helmut von der Aue, as an escaped prisoner of war, was turned over to military authorities and eventually sent back to Camp McCain. 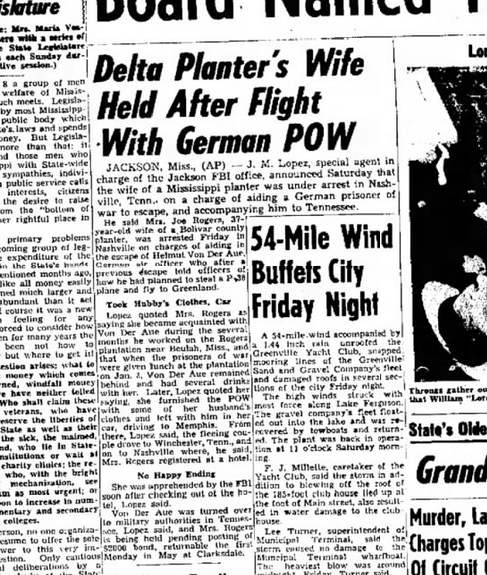 Meanwhile, the story went “viral.” Newspapers across the nation picked up the affair between the German P.O.W. and the planter’s wife, no doubt to the dismay of Mr. Rogers. The press spared no details.  In an article in the Kansas City Star, for example, Helmut von der Aue claimed his undying love for Edith.  “Her husband was seldom at home,” he said, “I fell in love with her and I wanted to marry her. I still do.”  Edith’s bond was posted by none other than her husband and she returned to Bolivar County, where she was to stand trial in Clarksdale in May.  During her bond hearing, Mrs. Rogers, who was “smartly dressed except for her bare legs,” refused to have her photo taken and did not speak. The only sound she made during the hearing was an audible laugh when asked “Have you talked to your husband yet?” 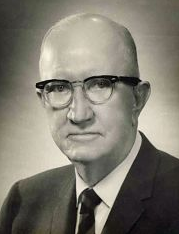 No doubt the next few months were a bit uncomfortable at the Rogers household.  By the time of the trial in May, however, Joe Rogers and his attorney Walter Sillers (right) - who just happened to the Speaker of the House in Mississippi - had convinced Federal Judge Allen Cox to give her two years’ probation, thus sparing the family any further embarrassment.  Helmut von der Aue was sentenced with thirty days of solitary confinement at Camp McCain.  And thus the matter passed into history.  What ultimately happened to either of the lovebirds is unknown, but within a short time German prisoners of war were returned home.  As such, it’s likely that the handsome von der Aue again found romance in his native land.  As for Mr. and Mrs. Rogers, there is no indication there was ever a divorce.  In time, perhaps the whole affair was chalked up to “unforeseen circumstances” and life returned to normal. Given the national exposure the story received, however, that’s difficult to imagine.

Joe Rogers died in 1974 and is buried in Cleveland, Mississippi.  Edith Rogers lived until 1991 and is buried with her family in Tennessee.