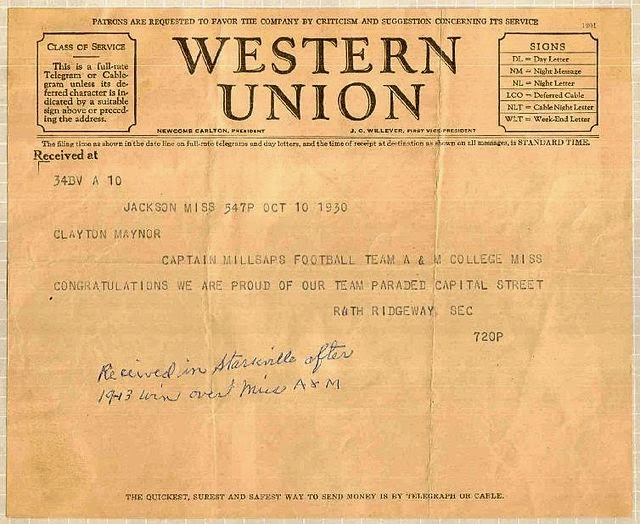 During the first half of the 20th Century, both Millsaps College and the Majors' arch rival Mississippi College regularly played bigger (and usually better) schools, including plenty of teams considered powerhouses today. The number of wins against the likes of LSU, Ole Miss and Mississippi A&M were few and far between during those years, but in 1930, Millsaps scored a huge upset against the Maroons of Mississippi A&M by a score of 19-13. That win prompted a congratulatory Western Union telegram (right) delivered to the Majors' captain in Starkville and a parade down Capitol Street in Jackson. The same season, though, Millsaps lost games to Stetson and Birmingham Southern, both teams they should have beaten. So, was the victory over the Maroons a fluke? Only time would tell. 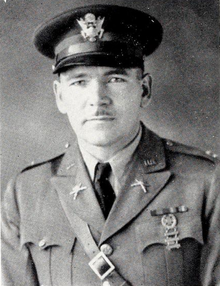 Just four years later, in 1934, Millsaps again traveled to Starkville to take on Mississippi State College (the name of the school had been changed by the Mississippi Legislature in 1932). Since Millsaps' dramatic victory in 1930, the Maroons had won three straight over the Majors and had blanked Millsaps 18-0 in 1933. But Mississippi State had little else to crow about in '34. The boys from Starkville had not had a winning season since 1927 and the week before had been shut out by Vanderbilt. The coach for Mississippi State was a military officer named Capt. A. Ross MacKechnie. MacKechnie (left) had played football at the University of Washington and was a professor of Military Science and Tactics at Mississippi State. His annual salary at Mississippi State was $600, plus the use of a house on campus. Meanwhile, the Millsaps coach was no stranger to Starkville. A native of Covington County, Coach Tranny Lee Gaddy (right) was a four-year letterman in football, track and basketball at Mississippi A&M. Interestingly, he was also a big game hunter and had bagged a bengal tiger in the jungles of India. During the 1933 season, Coach Gaddy's Majors posted a 4-4-2 record, capped by a thrilling 2-0 win over the hated Choctaws of Mississippi College on Thanksgiving Day.

The 1934 renewal of the Millsaps-Mississippi State rivalry was played on Friday, October 5. Neither team did much in the way of scoring, but the Majors drew blood in the first quarter when halfback Gabriel "Axe" Felder scored on a rushing play. The extra point was made by Bob Womack, a two-way lineman who was the

hero of the 1933 win over Mississippi College. In that contest, Womack blocked a block for a safety, which turned out to be the margin of victory. Mississippi State scored in the second quarter on a touchdown pass reception by Fred Walters. Walters (right), from Laurel, was an amazing athlete. A four-year letterman in football, basketball and baseball, he played for the Boston Red Sox in 1945 and was an SEC official in baseball and football for twenty-three years. His catch in the game evened the score with the Majors, or least it should have. The extra point, however, was low and wide and no good. Neither team could score again and Millsaps walked away with a 7-6 win. 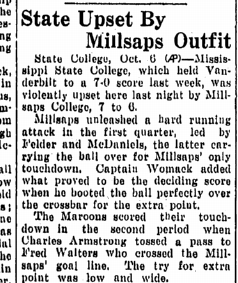 Newspapers across the state, of course, heralded the upset. The Purple and White, the Millsaps College newspaper, gloated over the win, running a headline which read "Militant Majors Maul Cocky Cow College Cohorts!" To celebrate the victory, Saturday classes were cancelled and both faculty and students enjoyed a "demonstration" at the North State Street entrance to the campus. The Purple and White also included a bit of post-game "smack" talk, inquiring if anyone at A&M studied "anything other than horticulture" and joking that all the Maroons appeared the same, each sporting "a number ten shoe and size six hat." Mississippi State, meanwhile, was much more gracious than the Methodists in the 1935 yearbook. "Coming to the local campus as under-dogs," reported the Reveille, "they walked away with a well-earned victory, and left a spirit of desolation in their wake." By the end of the season, Millsaps posted a very respectable 7-2-1 record, including a shutout of Mississippi College at the state fairgrounds on Thanksgiving Day. Mississippi State, meanwhile, had another unimpressive 4-6 year, losing the final game to Ole Miss 7-3. Interestingly, both the Flood (as Ole Miss was called at the time) and the Maroons worked out at Millsaps on Friday before Saturday's game at Jackson's Municipal Stadium. After the game, the M Clubs for both schools organized a dance, and students of both Ole Miss and Mississippi State "did the two-step into the night."

Of course, the rivalry between Mississippi State and Ole Miss is alive and well and since 1927 the annual grudge match has been known as the "Egg Bowl." The rivalry between Millsaps and Missisippi State, however, ended in 1944. For all the bravado by the Majors following their 1934 victory over Mississippi State, it would not happen again. The next year, Mississippi State's fortunes changed dramatically under head coach Ralph Sasse (right), who was, ironically, a real Major (in the army that is). Perhaps his most famous act at Mississippi State was adding a live bulldog mascot (Coach Sasse is seen holding the dog in the photo here). Over the next decade, Mississippi State played Millsaps another six times and beat the Majors by a combined score of 256-19. The final game, played in the midst of World War II, was a 56-0 rout by the Bulldogs. The total record between the two schools stands at 14-2-1 (they played to a 0-0 tie in 1929). And with that, the series between Millsaps and Mississippi State ended. In the immortal words of the late, great Jack Cristil, you can "wrap it in Maroon and White."