The Battle for the Golden Egg 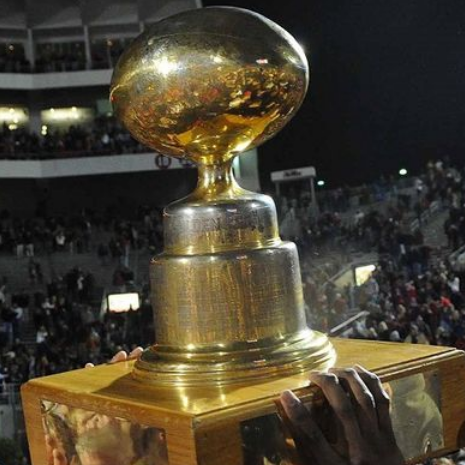 The Old Oaken Bucket, the Jeweled Shillelagh, the Keg of Nails and the Little Brown Jug. If this sounds like the inventory for a very strange estate sale or perhaps a quirky museum exhibit (and it could be either), these are actually all trophies awarded to the winners of some of college football’s greatest rivalries.  Here in Mississippi, of course, the greatest treasure is the Golden Egg, and the annual contest for that most sought-after trophy – the “Egg Bowl” – is renewed each November. While nearly all Mississippians know about the “Battle for the Golden Egg,” how the game became known as the “Egg Bowl” may not be as well known.

The “Golden Egg,” which is in reality a football, came about as a means to lessen the tension between supporters of the University of Mississippi and Mississippi State University. While the trophy is actually a football, it is shaped like an egg, as footballs in the 1920s were more oblong than today. The “Golden Egg” trophy came along in 1927, one year after a dramatic (and violent) game between Ole Miss and Mississippi A&M College. The Mississippi boys from Oxford won the game, but it was what happened after the game that caused cooler heads to come up with the idea for a trophy. 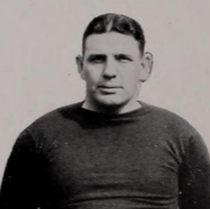 In 1926, the two rivals met in Starkville after posting identical 5-4 records. Ole Miss had dropped three of their last four games (including a 33-15 loss to Drake in October), while Mississippi A&M (as they were then known) had dropped two of their last three, but posted a dramatic 7-6 win over LSU on October 23. More important for Ole Miss, though, was the fact that the Red and Blue had not defeated their arch rivals in thirteen years. In fact, from 1911-1925, Mississippi A&M had outscored their in-state rivals by a combined score of 327-33! So determined were Coach Homer Hazel's University boys that each had vowed not to shaved until they had beaten the Aggies. As a result, the Ole Miss team sported heavy beards for the contest. Played on Thanksgiving Day, it was the first time in nine years the game would be played in Starkville. Tickets for the game were $2.50, although students could get in for $1.00. Special trains brought spectators from Jackson, Greenville and Oxford, and another brought students from the Mississippi State College for Women in Columbus. Coach Hazel’s (above) team departed Oxford on Tuesday and spent the next two nights in Aberdeen. When they arrived in Starkville on Thursday for the game, the field was a “sea of mud” after a day of rain on Wednesday. The conditions didn't dampen any spirits, though; by game time, more than 11,000 fans crowded the stands and end zones. The standing-room-only crowd was the largest thus far to witness the annual grudge match. 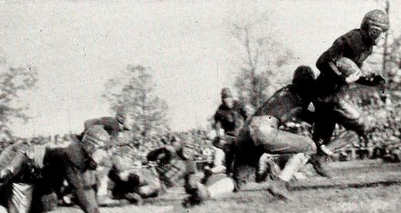 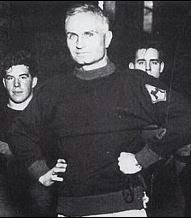 The Mississippi A&M coach in 1926 was Bernie Bierman. The ’26 campaign was one of only two for him in Starkville. In 1927, he would return to Tulane and then move on to his alma mater, Minnesota, where he compiled a record of 153-65-12. Before the game, Bierman (lower left) noted the condition of the field and admitted that the mud would “cramp their style” of play. Indeed, the Aggies completed only four passes and threw three interceptions. In reality, neither team did much in the way of scoring that day. In the first quarter, the Aggies and Red and Blue managed just one first down each. In the second period, though, Ole Miss got on the board when fullback Lacey Biles, a senior from Sumner who was called a “prince among men and a jolly good fellow,” smashed into the end zone from the three yard line. Kicking the extra point was Webb Burke, a 6’1” center with a jammed toe who had never attempted an extra point in his career. To his amazement (and Coach Hazel’s relief), the kick was good and Ole Miss led 7-0. Responding, Coach Bierman threw in five substitutes and after a 69-yard drive managed to score on a halfback run by R.R. Biggers. During the point after attempt, however, the Ole Miss line rushed hard and the kick by W.B. Ricks was no good. Mississippi A&M trailed 7-6. And that was it, as neither team could score another point. As a result, Ole Miss came away with the victory they had so long hoped for. Now, at last, the players could shave again (which they did later that same day). 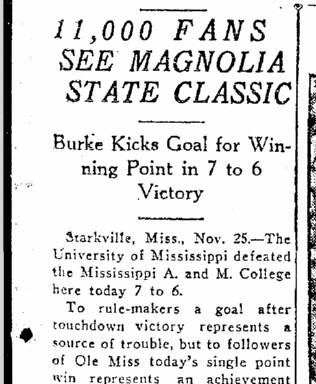 Excited after finally beating their arch rivals, the Ole Miss fans spilled onto the field and a number of
them rushed for the goal posts. In response, several of the A&M supporters grabbed some wooden chairs and began attacking the “bearded Bersekers” from Oxford. "Irate Aggie supporters,” according to one account, “took after the ambitious Ole Miss group with cane bottom chairs, and fights broke out.” After the fight, which caused several injuries, The Reflector called the Ole Miss fans who had attempted to take down the goal posts "a band of hoodlums.” Both sides were guilty, though, and “The Battle of Starkville” was an embarrassment to both schools, which was witnessed by Mississippi Lieutenant Governor Dennis Murphree. The consensus was that something had to be done to calm down the rivalry. Thus, the “Golden Egg” was born. 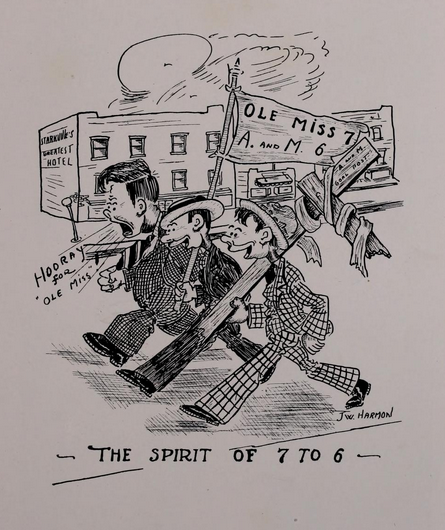 Before the next game between the Red and Blue and the Aggies, both student bodies looked for a way to award the victors in a decidedly less hostile way. The first proposal, which was rejected by both school administrations as too costly and too cumbersome, was that the losing team would ship their goalposts to the victors. As an alternative, an Ole Miss honorary society, Sigma Iota, proposed a trophy and within a week both schools had agreed on what we now know as the “Golden Egg.” The cost of the trophy ($250) was to be split between the two schools and both student bodies agreed that the trophy, consisting of a “gold football of regulation size and mounted on a metal base,” would be presented to the winner after the annual game. In the event of a tie, each team would host the trophy for half of the year. Even at the time, the trophy was called “The Golden Egg.” In addition, both student bodies agreed (in writing) that immediately following the game, the “student bodies will rise and sing their alma mater songs, the student body winning team singing first, the second following after the first has finished.” Curiously, that tradition seems to have been forgotten. 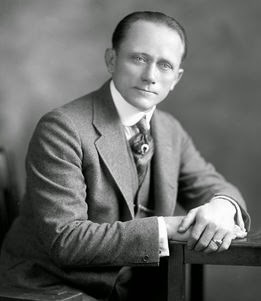 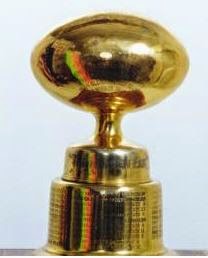 The first awarding of the “Golden Egg” trophy was on Thanksgiving Day in 1927 and was presented to the host team, Ole Miss, who won the game 20-12. Again, the 14,000 spectators represented the largest crowd to date to attend the game. The trophy was presented in a ceremony following the game and (presumably) both sides sang their respective Alma Mater songs. Taken with the new spirit of cooperation between the two schools, the editor of The Mississippian proposed consolidating Ole Miss and Mississippi A&M. With enhanced facilities, the editor opined that the football team the combined schools would produce would create a “combination unbeatable by any aggregation in the country.” Apparently, Gov. Theodore G. Bilbo (right) agreed, and proposed just such a consolidation in his inaugural speech in January. Faced with intense opposition and protests from both sides, however, the idea was quietly dropped from Bilbo’s agenda. Today, of course, the “Battle for the Golden Egg” has nationwide interest and has created perhaps more passion among the Bulldog and Rebel faithful than ever before. Since 1927, though, the “Golden Egg” has peacefully changed hands at the conclusion of the “Egg Bowl,” a name coined in 1979 by a Clarion Ledger sports writer. Hopefully, the award of the $250 golden football will keep the peace for many years to come.