Ironclads, Cotton and Corn: The Civil War in the Mississippi Delta (Part II) 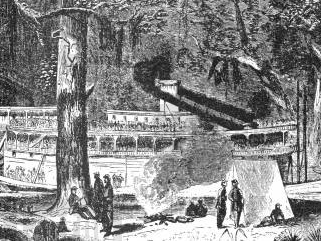 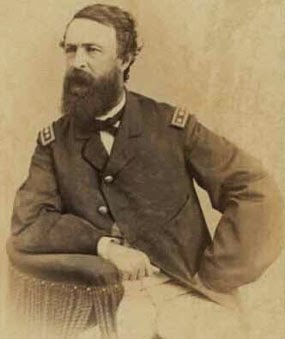 At the same time the Yazoo Pass Expedition was ending in failure for Union generals Leonard Ross, Isaac Quinby and the Union navy, Admiral David Dixon Porter and the Union river fleet attempted to get into the Yazoo River from the south. In essence, Porter believed that transports and gunboats could enter the Yazoo and thence move into Steele’s Bayou, Black Bayou and Deer Creek to get to the Big Sunflower River. This adventure, known as the Steele’s Bayou Expedition, began on March 14, 1863, with five “City Class” gunboats – the Carondelet, Mound City, Cincinnati, Louisville and Pittsburgh. Navigating through bayous no larger than creeks, the gunboats, assisted by pioneers from Sherman’s corps, slowly made their way upriver. At Hill’s Plantation – near where Teddy Roosevelt would later make famous the “Teddy Bear” – Sherman’s main infantry caught up with Porter’s gunboats. Porter (right), however, enthusiastic with his progress thus far, decided to push on up Deer Creek to Rolling Fork. Here, unfortunately, his gunboats got stuck in the reed-choked streambed. Unable to move forward and with no room to turn the behemoths around in the narrow channel, Porter’s only option to back up. His way was blocked, however, by Confederate troops who began felling trees behind the fleet. Porter, it seems, was in a real pickle. 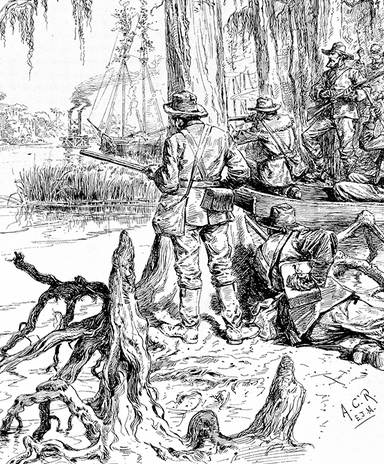 On March 20, Confederate infantry under the command of Samuel W. Ferguson arrived near Rolling Fork with the 12th Arkansas Sharpshooter Battalion and a three-gun battery. Ferguson (below left) was a West Point graduate and a native of South Carolina. After the war, he settled in Greenville, Mississippi, where he was an attorney and would serve on the Mississippi River Commission. At Rolling Fork, Ferguson deployed his artillery and the Arkansans and moved toward the trapped gunboats. Porter, meanwhile, had placed two boat howitzers atop an Indian Mound. These were soon outgunned by the Confederate cannons and forced back onboard, after which the gunboats opened fire on the advancing Confederate infantry with their big guns, preventing any further advance by Ferguson. At 3:00 pm, reinforcements arrived under Brigadier General Winfield Scott Featherston. Known as “Old Swet,” Featherston was a resident of Holly Springs, Mississippi, and had served with the Army of Northern Virginia in 1862 before being promoted to brigadier general and being transferred to Mississippi. After conferring with the Ferguson, Featherston deployed additional artillery support and added two more regiments to the mix, the 22nd and 23rd Mississippi Infantry, with plans to resume the attack against Porter’s gunboats. Anticipating an attack any moment, Porter ordered his sailors to smear mud and slime from the bottom of Deer Creek on the sides of the gunboats to make it more difficult to board and was prepared to scuttle his boats rather than allow them to fall into the hands of the enemy. Fortunately for Porter, however, the attack never came. 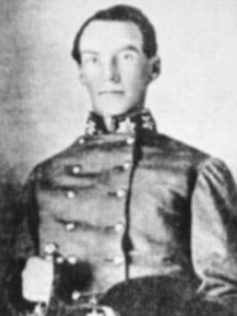 For some reason, the two Mississippi regiments did not advance as planned, much to the dismay of Ferguson. The failure was probably the result of bickering between the two Confederate commanders on the field (and Ferguson was known for being a “trouble maker”). Both officers claimed they were waiting for the other to begin the attack, but it was also clear that Featherston (right) had serious doubts about the plan to begin with. In his report on April 3, he went so far as to dismiss the very notion that his command of roughly 2,000 men could have ever captured the gunboats by land and was critical of the “visionary absurdity of the over-sanguine expectations… entertained by some military men” – no doubt speaking of Ferguson.*
Whatever the cause, the Confederates lost a golden opportunity at Rolling Fork to strike a potentially crippling blow to the Union war effort by capturing and/or disabling the cream of the Mississippi River fleet. Because of the Confederates’ failure to act, Porter was able – with the help of the army – to slowly back down the narrow creek to safety. While Porter claimed the expedition was a success – he reported that his men captured a large amount of corn and a large number of mules, horses, and cattle and had taken enough cotton “on our decks and on the mortar boats…to pay for the building of a good boat” – he had narrowly escaped a disaster for both the service and his own reputation. 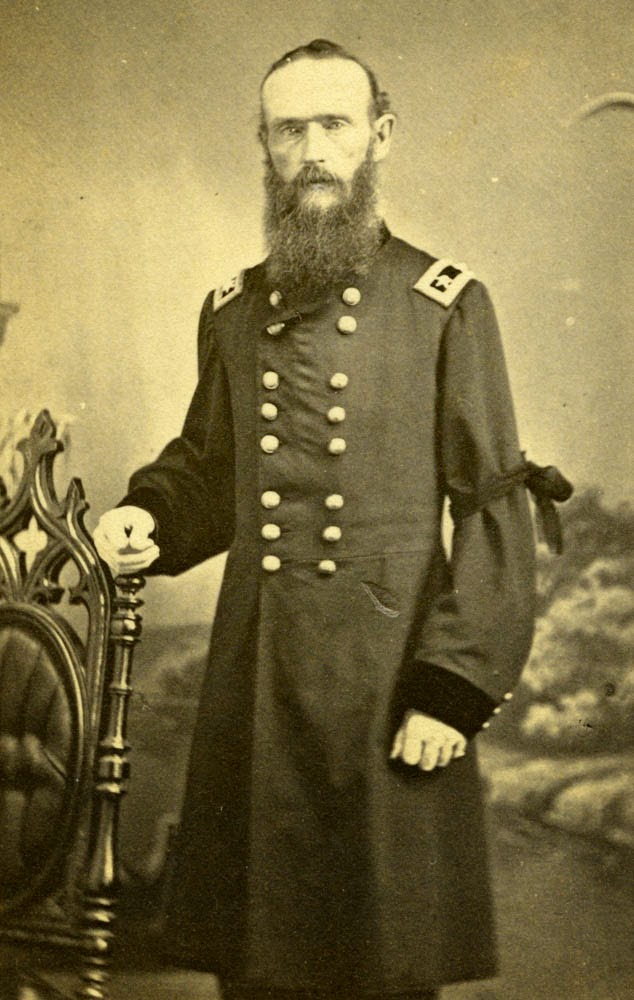 Quickly following the failed Steele’s Bayou Expedition was a Union infantry raid out of Greenville. Often confused with the Steele’s Bayou affair (because of the name), Steele’s Greenville Expedition (named for Union Gen. Frederick Steele) took place in April 1863. A decorated veteran of the Mexican War, Steele suffered a somewhat ignominious death in 1868 after falling out of a buggy while on vacation in California. In the spring of 1863, though, Steele (left) was ordered by Grant to “move down Deer Creek” from Greenville and “clear the country as you go of guerrillas and Confederate soldiers. Grant’s instructions were clear about how Steele should treat the inhabitants of the region. “If planters remain at home, and behave themselves,” he wrote, “molest them as little as possible, but if the planters abandon their plantations you may infer they are hostile, and can take their cattle, hogs, corn, or anything you need.” As a result, destruction and desolation of the countryside would become the guiding principle of the raid. Steele disembarked his men one mile north of Greenville on April 2, moving east across Fish Lake Bridge toward Judge Ruck’s Plantation (modern day Leland). Making “sad havoc” with the hogs, sheep and corn along the way, Steele’s column turned south along the west side of Deer Creek. Almost from the moment the Federals landed, the Confederates knew about the raid. This was partly because Samuel W. Ferguson, whose exhausted troops had just battled Porter’s sailors and Sherman’s infantry in the Steele’s Bayou Expedition, had spies operating in the area. Incredibly, one of his spies, who was somehow mistaken as a “contraband,” was able to personally interview Steele about his intentions. Armed with this information, Ferguson boldly advanced his much smaller force north from Rolling Fork, and met Steele’s men near the Willis Plantation (south of Arcola). Ferguson had more bluff than anything else, but in a series of retrograde movements was able to stall long enough for Confederate reinforcements to come up from the Snyder’s Bluff area. 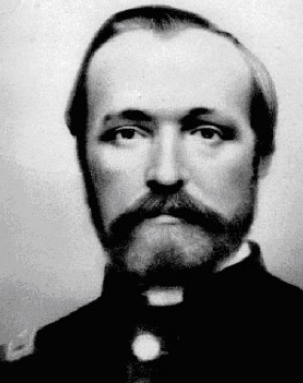 Not wanting to bring on a major engagement so far away from the Mississippi River, Steele started back toward Greenville, burning cotton gins, corncribs and bridges along the way. Jacob Ritner (left), a soldier in the 25th Iowa, wrote that “We nearly laid the country waste along the road  - burned most of the cotton gins, and a large amount of cotton, corn, bacon, etc., intended for the rebels army at Vicksburg. We brought in a large drove of fat cattle, besides what we got all the chickens, geese, ducks and turkeys we could eat…and we got more Negroes and mules than you could shake a stick at.” In fact, so many blacks joined the column that General Steele pleaded with Sherman to tell him what should “be done with these poor creatures.” Meanwhile, Ferguson, bolstered by the arrival of reinforcements under Stephen D. Lee, harassed Steele’s column all the way back to Greenville. Establishing a fortified camp, Steele’s men occupied Greenville for almost two weeks, frequently making forays into the countryside to skirmish with Ferguson’s cavalry. 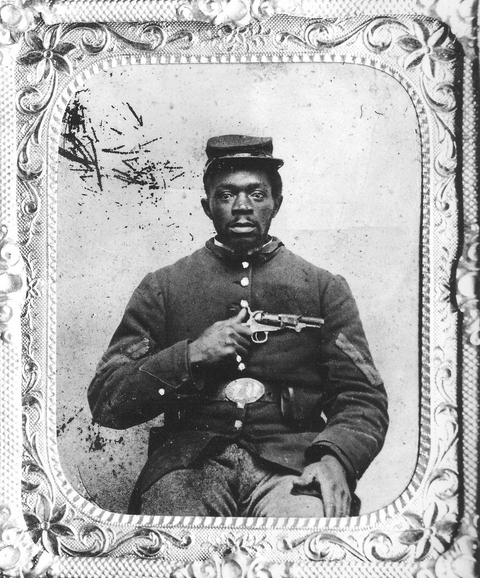 Significantly, it was at Greenville, for the first time, that Steele was instructed to enlist blacks for the Union army. Here was a dramatic change in policy and a shift in the Union war effort. Enlisting and training some 500 former slaves, many of these men were, no doubt, involved in the fighting at Milliken’s Bend in June. Reflecting on the addition of black soldiers into the war effort, Private Ritner wrote that “The soldiers have all got to be in favor of setting the Negroes free and arming them too. They see that this is the quickest way to end the war…although this is the universal sentiment as far as I know, yet there is as much prejudice against them as there ever was.” There was certainly no such approval of the arming of slaves in the Confederate ranks. Without question, the enlistment of blacks angered the Confederates. Equally disconcerting, however, was the destruction of the countryside. Stephen D. Lee correctly understood that it was the Federals’ object to destroy the provisions in the area, not necessarily to defeat an army. Lee, in a letter on April 9, stated flatly that “corn would now be scarce” for the Confederates. 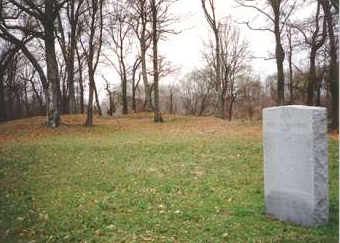 There were certainly other raids and expeditions in the Delta region during the final two years of the war. None of these, however, involved the amount of naval power exhibited by the Federals in the spring of 1863. Perhaps the most significant action during this period was a movement up the Yazoo River in February and March 1864, as part of Sherman’s Meridian Campaign. On the night of February 14, the same day Sherman’s army marched into Meridian, a small Union flotilla arrived at Greenwood, where they were greeted by none other than Greenwood Leflore, who was waving a small U.S. flag. They didn’t stay long before dropping back downriver to Yazoo City, but before leaving the Federals officers toured the site of Fort Pemberton, the same place that had given them such trouble during the Yazoo Pass Expedition. For those interested in viewing this little-known Civil War site today, the earthworks are still there (on Hwy. 82 west of Greenwood). A small park (above) marks the site of a portion of the fort on the north side of the highway.

The Civil War in the Delta is often viewed as a sideshow to the big show, a forgotten drama against the backdrop of the campaign and siege of Vicksburg. It should be noted, however, that these expeditions, despite their apparent lack of success, accomplished several goals for the Union war effort. First, in each of the expeditions and raids, large amounts of cotton, corn and other staples of life and livelihood were destroyed or captured, thereby depriving the Confederates of their use. Second, Confederate attention was drawn away from other critical points – while Grant toiled in Louisiana and eventually succeeded in finding a path south to cross the Mississippi at Bruinsburg on May 1, 1863, the Confederates were kept busy trying to protect the fertile Delta from the almost constant Federal activity. Finally, the recruitment of black soldiers into the Union army, which began in the Mississippi Delta as early as April 1863, would have a dramatic on the outcome of the war in Mississippi and throughout the region.


* Despite Featherston's doubts about the ability of infantry to capture a boat, that's exactly what happened a year later, when Col. John Griffith, with two Arkansas mounted infantry regiments, captured the USS Petrel on the Yazoo River.


(5) Fighting in the bayous: http://deadconfederates.com