In the 200 block of South Poplar Street in Greenville, Mississippi, there is a section of tracks from the early years of the 20th Century. They’re not railroad tracks, as one might expect to find in many towns across the state, but trolley tracks, one of the few remnants of the Greenville Electric Company trolley line. 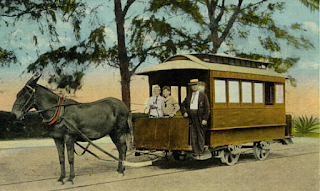 Greenville’s trolley system was established about 1900 and operated for almost three decades. There were similar trolley lines in other Mississippi cities during the period, including Meridian, Laurel, Vicksburg, Hattiesburg, McComb, Pascagoula, Natchez, Columbus and in DeSoto County. Nationally, street cars had been around since as early as the 1820s, although the early "omnibus" lines were pulled by horses and mules (as seen in this image from Palm Beach, Florida). The addition of rails for animal-powered streetcars came along in 1832 in New York and were added just two years later in New Orleans. By the mid-19th Century, there were more than 400 lines established in U.S. cities, carrying approximately 188 million passengers a year to and from their appointed rounds. Greenville's trolley line, beginning in 1887, used mules to pull their streetcars. Then, in the 1880s, electricity - prominently featured at the New Orleans "World Cotton Exhibition" in 1884-1885 - started the move away from animal power to mechanically-powered trolleys. Among other things, horses and mules required too much food and then left smelly piles of poop behind. Besides the economic and olfactory considerations, electricity was seen as more progressive and was "the latest thing."

In 1886, Montgomery, Alabama, was the first city to install an electric trolley route, and Scranton, Pennsylvania, is credited with the first all-electric system.  Richmond, Virginia's trolley line, however, was the first to utilize a pole connecting to a single overhead electric line and became the model for most of the trolley lines established throughout the U.S. The Richmond streetcars were designed by naval officer and inventor Frank J. Sprague (left), a business associate of Thomas Edison. When Edison, who manufactured most of Sprague's trolley cars, bought out Sprague's interest in the company, Sprague turned to another invention of modern convenience: electric elevators. The introduction of an electric streetcar line in Greenville, the only such line in the Mississippi Delta, was an indication of Greenville's emerging status as a progressive and modern city. The mayor of Greenville at the time, who no doubt encouraged the development of the new trolley system, was William Lewis Yerger, Jr., whose father had also served as mayor. Yerger was a Confederate veteran. Born in Jackson in 1842, he enlisted in 1861 and was an officer in the 12th Mississippi Cavalry, despite his youth, and served on General Charles Clark's staff (Clark became governor in 1863). It is interesting to note that Mayor Yerger, despite being an "old" Confederate, embraced the latest technology for his city at the turn of the new century. Yerger died in 1914 and is buried in the Greenville city cemetery. 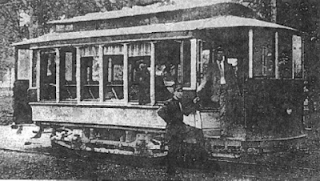 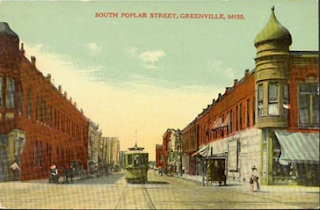 Like other trolley lines, Greenville's was owned and operated by an electric power company which was responsible for the electric generating plants supplying the power. Initially, there were two separate transit companies in Greenville: the Delta Electric, Power and Manufacturing Company (D.E.L.P. & M. Co.), which was chartered in 1901, and the Greenville Electric Light and Street Railway Company. The larger of the two, the D.E.L.P. & M. Co., purchased the smaller company’s plant and streetcar system in 1905. The new Greenville line connected the old Columbus and Greenville (C&G) and the Yazoo and Mississippi Valley (Y&MV)  passenger stations and was powered by a coal-fueled steam generator located at Poplar and Johnson Streets. After the merger of the two companies, the Delta Light and Traction Company advertised that the line consisted of “five miles of street railway, fully equipped with light vestibuled streetcars, and with duplicate engines and generators to furnish power for same, together with a 1,400 horse power direct connected generator of the most modern make…” During the trolley's heyday, the line included eight miles of track and fourteen cars. The company claimed the line was the “shortest modern trolley line” in the nation. 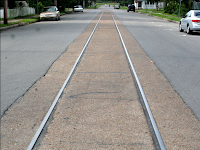 Then, in 1927, the Great Mississippi Flood inundated the Delta and wrecked the Greenville Trolley System. With tracks covered in mud and several rail cars abandoned to the flood waters, there seemed to be little hope of reestablishing service to the line. Service was eventually restored but by then there was little public demand for the railcars and the trolley line was discontinued on May 20, 1929, in favor of the next new thing in urban transit: buses. The honor of driving the first bus in Greenville, which occurred the very next day,  was given to Arthur M. Pender, who had been a conductor for many years on the trolley line. With the Great Depression, trolley lines across the nation ceased operation in favor of bus routes and by the 1940s most trolleys were already yesterday's news. Today, few reminders exist of the original trolleys, except in New Orleans. In Greenville, the only indication that there was ever a trolley in the Delta are a few tracks and a historical marker erected to mark the site.