In Pike County, Mississippi, there is a place – now just a ghost town – which was once a thriving center of commerce in the county. The town of Holmesville was established in 1816, just a year after Pike County was formed and a year before Mississippi became a state. Located near the geographic center of the county, Holmesville was named not for territorial governor David Holmes, as might be expected, but for a soldier who fell on the field of battle many miles from Mississippi.

Andrew Hunter Holmes, a Pennsylvanian, was an officer in the 24th U.S. Infantry during the War of 1812. In 1813, he was promoted to major with the 32nd regiment. On August 4, 1814, Major Holmes was selected to lead an attack on Mackinac Island, where the British maintained a fort named, appropriately enough, Fort George. Fort George was a strong position, and included cannon, a blockhouse and an ammunition magazine, and the Americans were unable to take the position. Killed in the attack was Major Holmes, along with several other soldiers. In 1815, after the war ended, U.S. forces reclaimed Mackinac Island and took possession of the fort, and renamed it Fort Holmes. With no military use, however, the fort began a slow decline and by the early 20th Century had all but disappeared. During the Great Depression, however, the fort was rebuilt according to its original plans by the Civilian Conservation Corps, and part of the rebuilding effort included a reconstruction of the blockhouse. Today, the 1930s blockhouse (above) is gone but the earthen fort remains and Mackinac Island, Michigan, is a popular tourist destination.

Holmesville, founded prior to Mississippi statehood, was named for Major Holmes. After the town was chartered on December 11, 1816, Holmesville grew at a rapid pace. As the judicial center of the new county of Pike (itself named for Zebulon Pike of Pike's Peak fame), Holmesville attracted lots of businessmen and lawyers, among them William A. Stone. Stone was a native of Livermore, Maine and a graduate of Bowdoin College in 1825 and a classmate of both Henry Wadsworth Longfellow (right) and Nathaniel Hawthorne, author of The Scarlet Letter. Stone was appointed as a circuit judge at Holmesville by Governor McNutt, and then served in the Mississippi House of Representatives from Pike County in 1838-1839, when he moved to Natchez. Later moving to Monticello and Hazlehurst, Stone was also a senator from Marion and Lawrence counties, mayor of Hazlehurst and a delegate to the Constitutional Convention in 1865 from Copiah County. He died in 1877. Although his burial place is currently unknown to me, it's unlikely to equal in grandeur that of his classmate Henry Longfellow, who, while buried in Massachusetts, is memorialized in Poets Corner at Westminster Abbey. 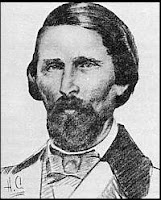 Holmesville was not only a place for business and law, it was a resort of sorts. Situated on the Bogue Chitto River, the area was a haven for those wishing to escape the vicissitudes of life in New Orleans, including the very real threat of yellow fever. In 1841, John Francis Hamtranck (J.F.H.) Claiborne (left), often called the “father of Mississippi history,” visited Holmesville and wrote glowingly about his experience. “This is really a pretty village,” he wrote. “Beautifully shaded with venerable trees, it is the residence of several interesting families and of many agreeable and intelligent gentlemen. It has a new and spacious Temperance Hotel, kept by a respectable Methodist, in a style of taste and comfort rarely met with by the traveler. We know of few places where one could spend the summer more agreeably or with a better prospect for health.” In addition to the Temperance Hotel, there was the California House (where presumably you could get a drink), and the town boasted a Masonic Lodge, courthouse and a newspaper called The Holmesville Independent. 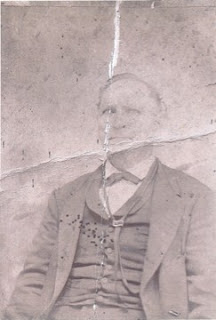 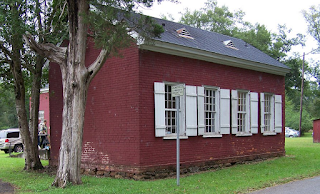 Among the “intelligent gentlemen” were members of the Quin family, starting with Peter Quin, one of the earliest settlers. Born in Ireland in 1750, he emigrated to the American colonies and fought in the American Revolution (although he was perhaps on the “wrong” side of the conflict). Regardless of his loyalties, he moved to the Pike County area about 1812 along with six of his seven children. Peter Quin, Sr. died in 1824. One of his sons, Peter Quin, Jr., was a colonel in the militia in the 1820s and then served two terms in the Mississippi Legislature. He died on August 25, 1825, from wounds received in a duel with a man who had been a “warm personal friend,” according to his obituary. The duel was reportedly over a political disagreement. Peter Quin, Jr. left behind twelve of his thirteen children, one of whom was Hugh Murray Quin (above right). A student at Oakland College, he became a lawyer, judge, planter, supervisor of the State Lunatic Asylum and mayor of Summit before his death in 1900. Like his father, he and his wife had thirteen children, but only eight survived to adulthood. Quin’s wife died after their last child was born in 1866. Hugh remarried the next year and fathered two more children. One of his brothers, Josephus, was a captain in Co. A, 14th Mississippi Cavalry during the Civil War. He was killed in the battle of Harrisburg (aka Tupelo) in 1864. He was 37 years old at the time. Most of the Quin family, including the patriarch of the family, now rest in the Holmesville Cemetery, along with many other prominent families. Other than the cemetery, there are just a few buildings which remain, including a small brick building (lower right) used at one time as the county clerk’s office. The building, often referred to as the old county courthouse, was enlarged in the 1930s and partially renovated in the 1970s. 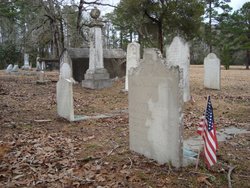 So, one might ask, what happened to the rest of this once bustling town? The story of the rapid decline of Holmesville is the same story repeated throughout Mississippi history. The booming town was a victim of “progress,” progress in the form of a railroad. Even though Holmesville was the county seat and was prosperous, the railroad (later part of the Illinois Central) decided to locate nine miles west of town. Despite the protests of her citizens, Holmesville declined as businesses moved to the railroad. In 1872, the county seat was relocated to Magnolia, which was on the railroad line, and Holmesville quietly passed into memory. If you’re ever in the neighborhood of Holmesville, take a few minutes and enjoy the peaceful setting. In particular, stroll through the old town square and among the monuments of the cemetery. And while you’re at it, take a moment to remember the sacrifice of Major Hunter Holmes, who gave his life nearly 200 years ago at far-off Mackinac Island, Michigan.