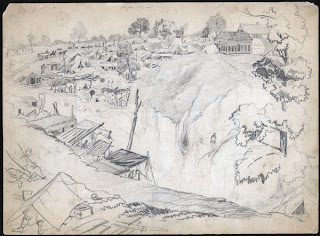 Following the failed assaults of May 19 and 22, 1863, Grant opted to begin siege operations to take fortress Vicksburg. With overpowering artillery from the army encircling the city and the Union navy operating in the Mississippi River, Grant's troops pounded Vicksburg day and night with an unrelenting bombardment. For six long weeks the Confederate defenders endured this constant barrage while their food and supplies dwindled. All the while, Union infantry crept ever closer by digging approach trenches toward the Confederate lines. The 36th Mississippi, which had been posted in a very exposed position at the Stockade Redan during the two assaults, was moved to another  place in the line on June 2. Here, Sergeant Christopher Rankin Rials and his comrades had to contend daily with Union sharpshooters who made life difficult (and often deadly) for anyone exposing themselves above the trenches. Of even greater concern to the men was a much more pernicious enemy: hunger. According to George Powell Clarke of Co. E, who wrote his memoirs for a newspaper in the 1890s, food was a constant concern for the men:

During all those forty eight days and nights of continual fighting, we subsisted on less than one quarter rations and this consisted for the most part of cow peas, boiled in clear water with a little salt for seasoning. Meat, during the last half of the siege, was a thing almost unknown. Our bread, during most of the time, was made of rice, and towards the last of peas ground in the mills. O! how our stomachs loathed that pea bread. 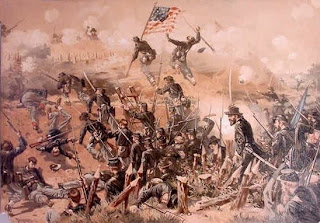 Across no-man's land was the 45th Illinois, which was stationed near the Shirley House. On June 25, the "Washburn Lead Mine Regiment" played a role in one of the most significant actions of the siege. In the Jackson Road sector, a mine shaft packed with 2,200 pounds of black powder was placed underneath one of the main Confederate forts, the Third Louisiana Redan. Once the mine detonated, according to the plan, Union infantry would rush into the resulting breach and capture the fort. Among the units picked to lead the charge was the 45th Illinois. When the mine exploded, a Union soldier remembered that “you could see nothing but a black cloud of dirt and powder smoke, throwing the earth thirty or forty feet in the air." Into the breach went Mortimer Leggett's Brigade of Logan's Division, led by the 45th Illinois, including Capt. John O. Duer of Galena. The fighting was desperate, with men from both sides wading into the bloody debris with wild abandon. The struggle continued for hours, but again the Union effort failed. The Confederates, aware that tunnels were being constructed underneath their positions, had built a secondary line behind the fort. Grant, stymied again, looked to try more mine explosions at other points along the line. With all likelihood, they would have worked too, as Pemberton's exhausted and hungry troops were getting weaker and weaker with each passing day. 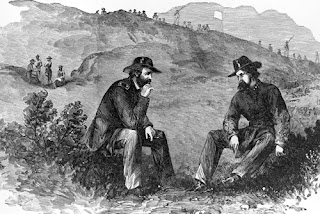 Faced with overwhelming odds and a demoralized army, Pemberton decided to do the hitherto unthinkable: surrender. At 8:00 in the morning on July 3, white flags went up along the Confederate works near the Shirley House and in view of the 45th Illinois, and for the first time in six weeks the guns went silent. Men from both armies cautiously came out into the open and fraternized with each other. Several hours later Grant and Pemberton met between the lines to discuss terms of surrender. Although negotiations continued throughout the night by message, the fighting remained suspended pending the outcome. Then, on the morning of July 4, it was official. U.S. Grant had taken the "Gibraltar of the South." With the surrender, the Confederates marched out of their trenches and stacked arms. In recognition of the courage of the Southerners, few of the victorious Federals cheered. Grant rode into Vicksburg at the head of Logan's division, and the "Stars and Bars" flying atop the Courthouse was replaced by the flag of the 45th Illinois (although another regiment later claimed the honor). Seeing the condition of the gaunt Confederates, many of the Yankees offered them food. George Clarke remembered that "a genuine son of the Emerald Isle" came by and asked some of the men of the 36th Mississippi if they were hungry. When they said yes, he "emptied his haversack, which contained crackers, bacon, coffee, etc. We thanked him and he passed on. Several others passed and divided with us, until we had enough to make a good meal." 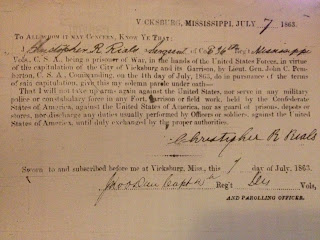 With the surrender, something had to be done with all the prisoners. After determining that sending them upriver to prison would take too much time and occupy too many transport vessels, Grant decided to parole the Confederates until properly exchanged. In essence, they would sign an oath to not take up arms again until they were "exchanged" with an equal number of Union prisoners. Until the oath was signed, the Confederates were free to move about behind their lines. Willie Tunnard, a soldier in the 3rd Louisiana Infantry, wrote that Vicksburg presented "a strange yet animated scene" and was thronged with curious men from both armies (the Confederates seemed especially interested in the Union gunboats). On July 7, a "clear, and very warm day," the work of paroling the men began in earnest. Confederate soldiers signed the oath individually in the presence of paroling officers assigned from various Union regiments. In the case of Willie Tunnard and Christopher Rankin Rials, who were both soldiers in Louis Hebert's brigade, that officer was Capt. Duer of the 45th Illinois. After signing the parole papers (seen here is the parole signed by Sgt. Rials), the Confederates went back to camp until July 11, when the surrendered army began the long march to Enterprise, leaving behind the city they fought so valiantly to defend. 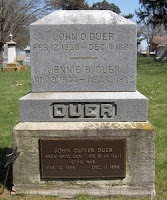 After they were "properly exchanged," most men in Pemberton's army rejoined their regiments and went on to fight in the campaigns of 1864 and 1865, and many thousands were killed and wounded as a result. Not all soldiers remained in the army, however. Some, like Sgt. Rankin Rials, decided it was time to go home, where he had two small children to take care of. By 1866, he and Louisa added three more to the fold. In time, the couple had a total of eight children. Sgt. Rials resumed his life as a farmer and apparently got into the sawmill business. Tragically, he was murdered in 1880 by a nephew by marriage, possibly the result of a business disagreement. Rankin Rials was 50 years old. After Vicksburg, Capt. John Oliver Duer was promoted to Major, then Lieutenant Colonel and finally colonel of the 45th Illinois. Serving throughout the war, Duer would eventually be given the rank of Brevet Brigadier General, one of nine Union generals from Galena, Illinois (including a certain Ulysses S. Grant). Returning to Galena after the war, Duer moved to Monticello, Iowa, where he was a bank cashier and merchant, building a "large, commodious store" to sell his wares. He was also elected as the town's treasurer and served as a city councilman. The father of four, Gen. Duer, like Sgt. Rials, died in 1880 and is buried in the Oakwood Cemetery in Monticello. He was 42 years old.

On July 7, 1863 (150 years ago today), these two men, one in blue and one in gray, met face to face. The encounter probably made no impression on Capt. Duer, as Sgt. Rials was just one of hundreds of men signing the oath that day. For Christopher Rankin Rials, though, it was likely an event he would remember for the rest of his life. After this brief moment in time, the men went on different paths, one to success and official recognition, the other to a life which ended in tragedy. For me, however, the life of Sgt. Rials was exceedingly significant, for his son Aaron, born in 1866, was my great grandfather. I can only ponder what might have changed had Rankin Rials not gone home to Copiah County after Vicksburg and instead been killed on some distant, bloody field.