A Tale of Two Soldiers 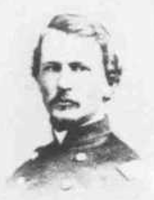 Christopher Rankin Rials was born in Copiah County, Mississippi, about 1829. A married man, he and his wife Louisa had three children, the youngest of whom, Elbert Martin, was born in 1861. The next year, Rankin, as he was known, left to join the Confederate Army and enlisted in Co. D of the 36th Mississippi Infantry. He was already thirty-three years old when he joined the "Hazlehurst Fencibles." Although he was older than most recruits, Rankin Rials was apparently a good soldier. Other than a brief stay in the hospital in Saltillo that fall, the record indicates he was present for duty for the rest of 1862 and into the spring and summer months of 1863. In fact, Christopher Rankin Rials became a sergeant in his company.  In Galena, Illinois, several months before Sgt. Rials shouldered a musket to fight for the Confederacy, John Oliver Duer (right) enlisted in the Union Army. Born in 1838 in Maryland, Duer was commissioned as a Second Lieutenant in Co. D of the 45th Illinois Infantry. Known as the "Washburn Lead Mine Regiment" (named in honor of Rep. Elihu B. Washburne, who added an 'e' to his name) the 45th Illinois saw action early in the Civil War. Led by Col. John E. Smith, a Swiss-born jeweler from Galena, the regiment's baptism of fire was at Fort Donelson. At Shiloh on April 6-7, 1862, the "Lead Miners" suffered 26 killed and 199 wounded and missing. After that, the unit participated in all of Grant's campaigns in Mississippi aimed at Vicksburg, and by the winter of 1862-63 were on the way down the Mississippi River with the rest of Grant's army to begin what would be the final effort to capture "The Gibraltar of the South."

By the late spring of 1862, John O. Duer, now twenty-five years old, had been promoted to captain. During the Vicksburg Campaign, his regiment saw extensive action in the battles leading up to the siege of Vicksburg, including the battles of Raymond and Jackson (where on May 14, 1863, several companies were forced to make a hasty retreat in the face of angry honey bees stirred up by Confederate bullets hitting their beehives). The regiment was also at Champion Hill, where one veteran remembered that the regimental flag was "riddled with bullets" and that all of the color bearers were killed or wounded. Meanwhile, the men of the 36th Mississippi, commanded by Col. William Wallace Witherspoon (left), were stationed at Snyder's Bluff north of Vicksburg. While they did not take part in the battles between Port Gibson and Big Black River, they had already seen plenty of action. After their first engagement at Farmington (near Corinth), Sgt. Rials and the rest of the Fencibles fought in the battles of Iuka and Corinth, where the regiment lost 12 killed and 71 wounded out of 326 present for duty. During the Vicksburg Campaign, Hebert's Brigade (which included the 36th Mississippi) was at Snyder's Bluff to protect the northern approaches to the city. On May 16, 1863, following the defeat of John C. Pemberton's army at Champion Hill, however, Hebert's Brigade was ordered into the trenches at Vicksburg to await Grant's expected arrival. The regiment, in fact, was thrown into one of the most critical points on the Confederate line. Known as Stockade Redan (above), the fort occupied primarily by the 36th Mississippi guarded the ominously-named Graveyard Road. Other regiments of Herbert's Brigade moved into trenches to the right, stretching all the way to the Jackson Road, another vital avenue into fortress Vicksburg. It would not be long before the Mississippians felt the full fury of Grant's army. 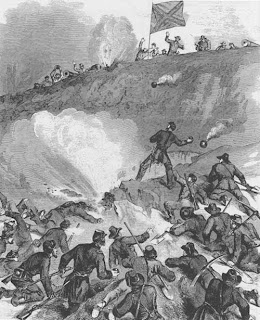 On May 19, William T. Sherman deployed his XV Corps, which had arrived first in front of the Confederate defenses at Vicksburg and prepared to launch an attack against the sector of the line held, in part, by the 36th Mississippi. According to Louis Hebert, the cannonade which preceded the attack was ferocious. "From that time our entire line became subjected to a murderous fire," he wrote, "and nearly every cannon on my line was in time either dismounted or otherwise injured."  Once the barrage ended, the Union infantry surged forward, but the Federals were met with an equally withering fire from the fort's defenders. As one soldier in the 36th Mississippi recalled "At the proper time our batteries opened on them with grape, canister, and shrapnel shells, which told fearfully on their crowded ranks." Faced with mounting casualties, Sherman's attack ground to a halt and the May 19 assault ended in failure. Grant, however, would give it one more try. At 10:00 a.m. on May 22, Grant's entire army, consisting of three corps, moved  forward to attack the whole of Pemberton's defenses. In the Graveyard Road sector, Francis P. Blair's Division of Sherman's corps moved to attack the Stockade Redan, led by a volunteer group of 150 men armed with wooden planks to bridge the ditch in front of the Confederate fort. As the lead elements of the assaulting column, known afterwards as the "Forlorn Hope," passed through a road cut just 400 feet in front of the fort, the men of the 36th Mississippi rose to their feet and began pouring shot and shell into the ranks of the Union column. In spite of the ferocious fire, some Federal soldiers were able to climb the parapet and plant their regimental colors. However, the temporary gains were not enough and the attack again stalled in front of Stockade Redan. Elsewhere along the line, men in blue and gray fought bitterly for control of the various forts. Along the Jackson Road, Maj. Gen. John A. Logan's division was assigned the task of attacking the 3rd Louisiana Redan and the Great Redoubt. During the assault, Col. John Eugene Smith (above right) led the 45th Illinois to the slope of the redan but could go no further. Too exposed to retreat, the Federals stayed until dark when they were finally able to pull back. Despite a short-lived breakthrough at the Railroad Redoubt in the sector assigned to the men of the XIII Corps, Grant's second assault, as on the 19th, failed to dislodge the Confederates. Tragically, the attempt added another 3,200 Union casualties to the rolls of the dead and wounded, along with several hundred more on the Confederate side. Neither Sgt. Christopher Rankin Rials nor Captain John O. Duer were among them, however.