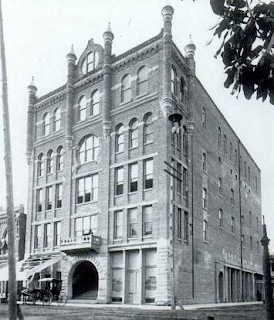 On August 19, 1883, the New York Times reviewed a new play which opened in New York City's Fourteenth Street Theater. "As it was observed last night," the Times wrote of "The Devil's Auction," "it was so entirely tedious, silly, and pointless that the conventional praise which is amiably accorded to spectacle and burlesque on the ground that they are not to be taken seriously is here quite out of place." Rather, the reviewer opined, the play "was not well presented. There was a good deal of cheap scenery, much poor ballet-dancing to bad music, and an abundance of stupid performance." All in all, the play received a proverbial 'thumbs down' in New York's newspaper of record. Despite the bad reviews, the play was received by "large and appreciative audiences" a year later by the people of Natchez, Mississippi.

"The Devil's Auction" played to a packed house at the Temple Opera House (right), an impressive five-story structure located at Main and South Union, "catty-corner" from the city's even more impressive Catholic cathedral. Built in 1891 on the site of the original Masonic lodge, the high-rise contained not only the new Masonic lodge and the Temple Opera House but other businesses as well, including Behrens Fruit Company, specializing in bananas, lemons, oranges, coconuts and California fruits, as well as oysters when in season.

About 1904, the building was purchased by John H. Chambliss, whose father, Hiram, was a Confederate soldier serving in Darden’s Co., Jefferson Flying Artillery. John was born in Jefferson County about 1864. Although his father survived the Civil War, he died soon thereafter and John moved with his widowed mother and two siblings to St. Louis, where she had family. In 1872, she met and married A.J. Anthony, a cattleman, stage coach conductor, sutler, buffalo hunter and county treasurer in Dodge City, Kansas. Thus, John Chambliss’ formative years were spent on the wild plains of Kansas and in the rough and tumble town of Dodge City. The Anthony home (left) was located about a mile west of town. At age eighteen, John went back to Mississippi and located in Rodney. After establishing himself in various business pursuits, he went back to Dodge City to marry his childhood sweetheart.

Twenty-one-year-old Emelia Mueller was the daughter of German immigrant and Union veteran John Mueller. Mueller came to Dodge City in 1875 and established a boot shop on Front Street. Before moving to Kansas, he was a neighbor of the Anheuser and Busch families in St. Louis and was reportedly approached by Eberhard Anheuser about investing in the brewery business. "No, you'll never make money selling 5-cent beer," was Mueller’s response and he chose instead to make boots and shoes on the western frontier. As a boot maker, Mueller was certainly successful, filling custom orders for Wild Bill Hickok and Buffalo Bill Cody, among others. He did so well selling boots, in fact, that he decided to invest in a saloon and in three cattle ranches. By 1879, he had amassed enough of a fortune to build a prominent home for his family. Constructed of limestone, the Mueller-Schmidt House is now a museum and an important Dodge City landmark. In the photo above, John Mueller is in the center and Emelia is on the left. 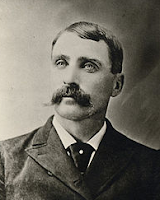 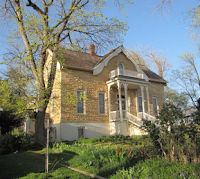 John Chambliss and Emelia Mueller were married on Thursday, June 13, 1889. The wedding was apparently the social event of the season, attracting a large party of guests, including Chalk Beeson, the owner of the Long Branch Saloon. Like the groom’s stepfather, Beeson (left) had been a buffalo hunter before moving to Dodge City and had taken Phillip Sheridan, George Custer and Grand Duke Alexandrovich of Russia on buffalo hunting expeditions. After setting up the Long Branch Saloon, where he made acquaintances with Bat Masterson and Wyatt Earp, Beeson went on to serve as sheriff of Ford County. For the wedding festivities, Beeson brought his Long Branch Silver Cornet Band to entertain the guests. After exchanging vows in the parlor of the house, the couple was showered with gifts, including silver utensils and fine linens, many of which are now on display at the Mueller-Schmidt House museum (left). Finally, about midnight, the guests and the band departed and the newlyweds boarded a train to Denver for their honeymoon. After that, John and Emelia Chambliss planned to move to Fort Reno in the Indian Territory to begin a new life. 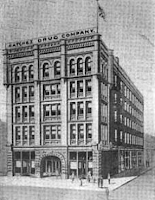 The lavish wedding festivities at the Mueller house was in stark contrast to the financial misfortunes of the Mueller family. In 1886, John Mueller had lost his entire herd of cattle in a blizzard and a year after the wedding would be forced to sell the family home and move back to St. Louis. No longer able to make it as a bootmaker, Mueller again joined the army, despite his age. He died two years later. Meanwhile, his son-in-law's fortunes were on the upswing. Before the turn of the century, John and Emilia moved to Natchez, where he set up shop as a druggist. In 1904, Chambliss purchased the Temple Opera House building and turned it into the Natchez Drug Company (left), an enterprise which not only served as a local pharmacy but produced bitters and other tonics for wholesale distribution, including "Nelson's Chill Cure.” In addition to the drug store, there was a "book and stationary emporium" on the ground floor. To ensure success, the Natchez Drug Company had state-of-the-art equipment, including a gas-fired laboratory on the fourth floor and Chambliss hired a team of chemists and lab assistants, many of whom were young ladies like Inez Netterville of Wilkinson County, to operate the laboratory. Among the druggists he employed was Cleveland Laub, a native of Natchez and the son of Jewish German immigrants. In 1903, Laub received a pharmacy license from the Mississippi State Board of Pharmaceutical Examiners and immediately went to work for Chambliss. He was just nineteen years old. By all accounts, the Natchez Drug Company was a success and Chambliss received recognition for his business acumen both on the local scene and among other druggists (he was an active member of the National Wholesale Druggists’ Association). Indeed, the Bulletin of Pharmacy declared that the Natchez Drug Company was "equipped better than ever to go onward and upward in its progressive career." The success of the whole enterprise, however, came to a tragic end on March 14, 1908.