"Perfectly satisfied to die:" Capt. Absalom Dantzler and the Battle of Corinth

Absalom Frederick Dantzler was born in 1824 in Greene County, Mississippi, the son of a wealthy farmer named John Lewis Dantzler. Absalom's younger brother, born on New Year's Eve in 1833, was Lorenzo Dantzler, who would later become a successful lumber merchant in Moss Point. In 1847, Absalom graduated from Centenary College, then located in Jackson, Louisiana, and moved to Natchez. In 1849, he caught the California gold fever. Heading west with a large company organized by Major Walter H. Harvey, a West Point graduate and an experienced miner, the "manly band," as the Holmes County Mining Company was described by a Texas newspaper, was formed as a military organization. Arriving in the Sacramento Valley after an arduous journey, Dantzler wrote to a brother in Natchez that he was confident of success. "I think I am now in the high way to fortune," he said, "and will reap a rich reward for all the troubles, dangers, and hardships that I have passed through in geting [sic] here." 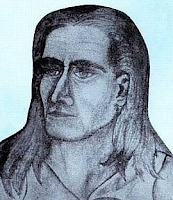 By 1855, he was back in Natchez, apparently never reaping the fortune he envisioned. Major Harvey, meanwhile, was charged with the murder of "Big Jim" Savage, known as the "Blonde King of the Indians" and for "discovering" the Yosemite Valley. Savage (left), on behalf of the local Indian tribes, challenged Harvey's company (likely including Dantzler) when they attempted to move onto Indian lands in the newly created Tulare County, where Harvey had been named county judge in a rigged election. In the dispute, Harvey, who was "high-strung and absolutely fearless," shot Savage four times. He was ultimately found not guilty and continued to serve as the county judge. Harvey never returned from California, and died in Los Angeles in 1861.

Back in Mississippi, Absalom Dantzler flirted with the "Know-Nothing" party and then moved to Jasper County, where he entered the political arena. In 1859, he was elected to represent Jasper County in the Mississippi Legislature. It probably helped that he married well, but the big issue in the election (despite such topics as slavery and states' rights) was whether or not to move the county seat from Paulding, located in the eastern side of the county, to the center of the county. When Dantzler (right) threw his support behind those who wanted to hold a separate referendum on the issue, he narrowly won the seat in a hotly contested election. Dantzler, who supported secession, continued to represent Jasper County in the Legislature into the war years despite the fact that he joined the Confederate army in April 1862. 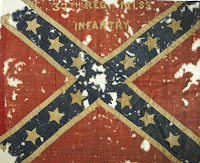 With the onset of the Civil War, thousands of volunteers rushed to enlist in the Confederate cause. Many of Mississippi’s early regiments went to Virginia and Kentucky where the fighting seemed most eminent. Other regiments, however, were not formed until after the war had been underway for some time. Such is the case with the 37th Mississippi Infantry. Formed on April 28, 1862, the 37th Mississippi was mustered into service at Columbus. Among the companies which comprised the regiment was Co. K, known as the “Jasper Avengers.” Elected as captain was Absalom Dantzler. No doubt his experience with the mining expedition in California and his political connections played a major role in his selection. Once formed, the 37th Mississippi became part of Col. John D. Martin’s brigade, along with the 36th and 38th Mississippi, and in September moved with Sterling Price to Iuka to cooperate with Braxton Bragg’s invasion of Kentucky. Alerted that Price was in Iuka, Gen. Ulysses S. Grant tried to catch the Confederates in a pincer. During the battle of Iuka on September 19, 1862, Price’s men fought one of the attacking Union columns, commanded by William S. Rosecrans, south of town. Although the 37th Mississippi was not engaged until late in the day and was separated from the rest of the brigade, the regiment still lost 78 men killed, wounded and missing in what Col. Robert McLain termed “a heavy cross-fire upon our right and front.” The next day, Price’s outnumbered army escaped the trap, evacuated Iuka and moved south to join Earl Van Dorn’s Confederate army. 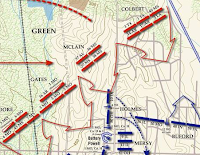 On October 3, 1862, Price and Van Dorn’s combined force attacked Rosecrans at Corinth, Mississippi. Corinth was an important crossroads. As the junction of the Memphis & Charleston and Mobile & Ohio railroads, the town had been the target of Union armies under the command of Henry W. Halleck in the spring and had finally been captured after an agonizingly slow advance (so slow it’s known as a ‘siege’). Now, in an autumn of Confederate advances into Kentucky and Maryland, Earl Van Dorn, a native of Port Gibson, took aim at recapturing the vital crossroads town. To do so, he would combine his army with Price’s and sweep down in a broad arc from the northwest. Advancing on the Confederate left with Price’s wing of the army, the 37th Mississippi was back with the rest of Martin’s brigade. Emerging from the woods fronting Rosecrans’ thinly defended outer line (which was the old Confederate defensive works from the siege of Corinth), Martin’s brigade swept inexorably forward, despite the impediments of felled trees and the increasing fire from Union defenders. In a matter of minutes, Price’s men pushed back the Yankees and captured the outer works, causing a cheer to erupt along the line. Left in the wake, however, were numerous casualties, one of whom was Capt. Absalom Dantzler. Hit above the shoulder blade, Dantzler died slowly from loss of blood after the bullet hit an artery. Colonel Martin was also wounded in the assault and died later that afternoon. A week after the battle, a soldier who stayed with Capt. Dantzler until he died wrote his wife Susan to relate the circumstances of his death. According to his account, Dantzler “talked as long as he had breath. He was as calm as if in common conversation perfectly satisfied to die.” * 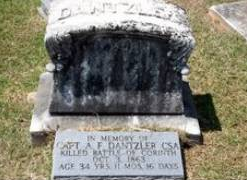 On October 4, Van Dorn’s and Price’s men failed to follow up their initial victories in the previous day’s fighting, and Rosecrans mounted a successful counterattack which turned the fleeting Confederate victory into a disaster of monstrous proportion. All totaled the 37th Mississippi lost 81 men during the battle of Corinth in killed and wounded. While many would recover and fight on, the war was over for Absalom Dantzler. Back in Jasper County, his wife was left to mourn his death as a widow with several children. Of course, she joined many others with a similar fate. On December 18, the Mississippi Legislature finally filled Dantzler’s vacant seat and he was buried in the Heidelberg cemetery in Jasper County, where he remains today. Unfortunately, a memorial stone (above) erected in front of his gravestone has the incorrect date of the battle. In time, Susan Millsaps Dantzler remarried. Her first cousin, Reuben Webster Millsaps, also a Confederate veteran, went on to a successful business and banking career and later founded Millsaps College in Jackson. The controversy over the Jasper county seat apparently was never completely resolved, however, as Jasper County is one of ten counties in Mississippi with two county seats. And Absalom Fredrick Dantzler, killed 151 years ago today, is one of many thousands of Mississippians who lost their life in the bloodiest war on American soil.

* Note: From Corinth 1862: Siege, Battle, Occupation by Timothy B. Smith. The original is in a collection at Duke University.
Posted by Jim Woodrick at 6:45 PM