Each October, a popular and curious item revisits the Old Capitol Museum in Jackson. For many Mississippians of a certain age, the annual reappearance of "the mummy" brings back fond memories. For generations, the haunting visage was a thing of wonder for children. In many ways, however, the story behind the "mummy" is as interesting as the item itself. The tale of the mummy that wasn't begins with a man named Brevoort Butler, who was a
voracious collector of antiquities. 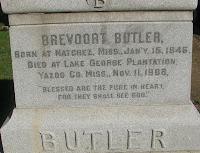 Brevoort Butler, Jr. was born in 1846 in Natchez. His father, of the same name, served in the Confederate cavalry despite being rather old for a typical soldier (he was nearly fifty in 1861). Butler was a private in Co. A of the Jeff Davis Legion. Known as the Adams Troop, the company enlisted in June 1861, just two months after Mississippi’s secession, and went to Virginia. The Jeff Davis Legion remained in the eastern theater throughout the war and participated in most of the major cavalry engagements of record, including the fighting on July 3 at Gettysburg. Butler survived the war but died just a year later in February 1866. His son, Brevoort Butler, Jr., was also in the cavalry, but enlisted late in the war (in 1865) in Butler’s independent cavalry reserve, possibly commanded by his father. The eighteen-year-old Brevoort Butler, Jr. saw little if any action during the war. 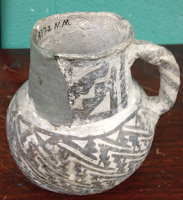 Sometime after the Civil War, Brevoort Butler, Jr. moved to Yazoo County and established a plantation at Lake George. He married, but apparently his wife died soon after the wedding and he never remarried. As a result, he left no direct descendants. When he died in 1908, however, he left behind an incredible collection of Native American artifacts from the Mississippi Delta region and other sites, plus an array of tools, pots, weapons, etc., collected or purchased from across the United States (for example, this piece of pottery from New Mexico) and abroad, particularly from Central and South America. So large was Butler's collection of curiosities and antiquities that he built a separate building on his plantation to house his "museum." When Butler died at his Lake George plantation on November 11, 1908, his heirs, including several nephews and nieces, were left with the large collection. Not surprisingly, they chose to sell the whole thing.

In hopes of finding a buyer, one of Brevoort Butler's nephews, James Sessions Butler, published an ad in various publications announcing the sale of "thousands of Arrows, much valuable pottery, many beautiful Pipes, Stone Axes and other implements of war and the chase." James Butler, born in 1877, was a veteran of the Spanish American War and served as captain of Co. I in the Second Regiment, which was mustered in at Jackson in June 1898. At the time of his uncle's death, he was living in Yazoo City. In August 1910, Capt. Butler invited Dunbar Rowland, who was director of the Department of Archives and History at the time, to come to Lake George to evaluate the collection and give some idea of the value of it. Clearly, Capt. Butler hoped that Rowland (above) might purchase the collection for the state archives. Rowland spent two days at Lake George assessing the situation and found the collection to be "large and valuable" and was "inclined to the opinion that it equals if it does not exceed in importance any other collection made by an individual for his own pleasure." Among the approximately fourteen thousand objects in the Butler collection, Rowland reported, was "About every kind of implement, ornament, or weapon used in the daily life of the Indians." He heartily recommended that the State purchase the entire collection for preservation and display if it could be "bought at a reasonable valuation." It took some time - in fact it was another thirteen years before the State of Mississippi finally purchased the collection - but in 1923 thousands of priceless artifacts arrived in Jackson, where the collection resides today (many items still retaining the original tags and labels). 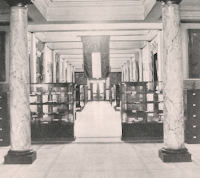 Among the thousands of archaeological treasures that comprise the Butler collection are, unfortunately, a number of fakes, perhaps produced by hucksters who hoped to cash in on a wealthy but somewhat naive collector. Among the most curious specimens purchased by Brevoort Butler was a mummy, believed to be an Egyptian princess. When the mummy arrived in Jackson, "she" was put on exhibit in the basement of the new Mississippi State Capitol, where several display cases (left) were kept with items relating to Mississippi history. As one might expect, the mummy was a crowd favorite. When the Old Capitol became the state museum in 1961, Charlotte Capers, then the MDAH director, decided not to display the mummy since it had no connection to Mississippi. The decision was an unpopular one and (much to the delight of children of all ages) Mississippi's mummy still managed to make regular stops in the Old Capitol, if only in a darkened hallway at the top of the stairs (which made the experience even more exhilarating). 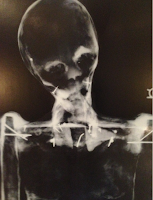 Then, in 1969, a University of Mississippi Medical Center student and a member of the Mississippi Archaeological Society requested the opportunity to x-ray the mummy. What Dr. Gentry Yeatman found after examining the "Egyptian princess" was that it wasn't Egyptian and the mummy wasn't a "she." In fact, it wasn't even a mummy at all. It was, instead, a fake. In a letter reporting the results of the test, Dr. Yeatman revealed that "The 'mummy' in question is composed of a wooden frame containing an assortment of some sixty nails and tacks, covered with burlap, newspaper, a thin cottony material, plaster, and paper-mache like substance, and finished with brown paint." Stuffed in various parts of the mummy were pieces of newspaper, one portion from a German language newspaper and another from the Milwaukee Journal from 1898, which at least provides some clue about the "mummy's" possible age and origin. Thus far, however, tracing the object's creator has proved elusive. Dr. Yeatman (below), after graduating from Mississippi State University and the University of Mississippi School of Medicine, went on to a successful practice in pediatrics in Tocoma, Washington, where he is now retired. Presumably, he has not examined any more fake mummies during his medical career.

While thousands of Mississippians were no doubt disappointed to learn that the magnolia state's most famous Egyptian princess was actually a dummy mummy, "she" remains popular when, each October, the mummy returns to the Old Capitol for a visit. Nowadays, the exhibit tells the whole truth about the "mummy." For the sake of mystery and wonderment, however, it might be best to allow the smallest Mississippians the chance to stare wide-eyed at the haunting figure for a bit before spilling the beans. Sometimes, you know, it's just more fun to keep certain things under wrap.
Posted by Jim Woodrick at 10:12 AM