"The mountain itself seemed to howl...": The 34th Mississippi at Lookout Mountain 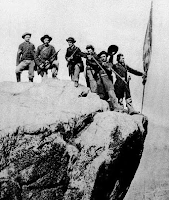 In the early morning hours of November 25, 1863, six brave souls from the 8th Kentucky (U.S.) volunteered to scale the heights of Lookout Mountain above Chattanooga, Tennessee, to see if the mountaintop’s Confederate defenders had departed. When they discovered that Braxton Bragg’s men were indeed gone, the Kentuckians planted their regimental flag at the crest. At dawn, the rest of the Union Army huddled on the slopes below observed the flag and knew that Lookout Mountain was theirs, resulting in “wild and prolonged cheers,” according to Maj. Gen. Joseph Hooker, whose men had secured the position. To celebrate the occasion, the detachment, led by 49-year-old Captain John Wilson, had their photograph (right) taken on Lookout Rock, one of many subsequent photos taken from the dizzying heights. 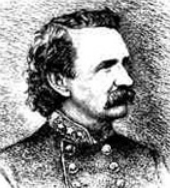 The fight for control of Lookout Mountain had occurred the day before and centered on the slopes below the crest, primarily at a place called the Craven House. Defending the position were several Mississippi and Alabama regiments in Moore’s and Walthall’s brigades with about 2,700 men, both part of Maj. Gen. Carter L. Stevenson’s division. The Mississippians, all in one brigade, were commanded by Edward Cary Walthall. A native of Richmond, Virginia, Walthall (left) moved to Holly Springs at a young age and began practicing law in Coffeeville in the 1850s. After being elected district attorney, Walthall joined the army as a lieutenant in the “Yalobusha Rifles” of the 15th Mississippi but by the fall of 1863 had been promoted to brigadier general. Perhaps his greatest day as a commander would come on November 25 with his defense of Missionary Ridge. On the 24th, however, his brigade was engaged in a desperate struggle to hold the slopes of Lookout Mountain.

At approximately 8:00 a.m., Union Brig. Gen. John Geary’s “White Star” division of Hooker’s Corps crossed Lookout Creek in the valley below the mountain and captured a large number of Walthall’s pickets who were posted there. The Mississippians were unaware of the Union advance due to a thick fog, an atmospheric condition which would later give the battle the name “The Battle Above the Clouds.” Pushing past the creek, the Federal line moved against Walthall’s position at the Craven House (above right), where Geary’s men met fierce resistance from the 24th and 27th Mississippi, the 29th and 30th Mississippi and the 34th Mississippi Infantry. The latter regiment was commanded by Col. Samuel Benton. A Tennessee native, Benton was a successful lawyer and newspaper publisher in Holly Springs before the war and was a member of the Mississippi Legislature and the Secession Convention. Wounded at Perryville, Kentucky, in October 1862, he was back with his regiment in time for the Lookout Mountain fight. Seven months later, on July 22, 1864, Benton (right) was seriously wounded at Atlanta and died after suffering for six days in the hospital at Griffin, Georgia. His body was later reinterred to Holly Springs’ Hillcrest Cemetery. Benton County, Mississippi, organized in 1870, is named in his memory.

During the desperate fighting, the 34th Mississippi was cut off from the rest of Walthall’s Brigade and had to withdraw as best they could up the steep, rocky slopes of the mountain, all the while suffering from Federal artillery fire raining down on them. Of that experience, one of Benton’s men, Private Henry Woodson of Co. E, wrote that “The whole face of the mountain was lurid with bursting shells and seems to belch smoke from every crevice, while the mountain itself seemed to howl and shriek as if a million demons had been aroused in its caverns.” The rest of Walthall’s brigade fought stubbornly around the Craven House but was forced back by overwhelming odds to a second line several hundred yards further up the mountain. By the afternoon, after being reinforced by Pettus’ brigade from the crest of Lookout Mountain, Walthall’s and Moore’s men managed to patch together a defensive line, but it was both thin and precarious. Luckily, the swirling fog and heavy clouds of smoke helped hide the weak condition of the Confederate position. Finally, after being battered all day, they were withdrawn about 8:00 p.m. and moved to the defense of Missionary Ridge. During the engagement, nearly 240 men from the 34th Mississippi were reported as wounded and missing, and many of those were captured. An untold number were killed.

Among the men serving that day in the 34th Mississippi was a private by the name of Thomas Jefferson Blythe. Born in August 1829 in Alabama, T.J. Blythe was nineteen years old when he married Ester Elvira Baum and settled down in Marshall County, Mississippi. His father, Andrew Jackson Blythe, served briefly in the Second Seminole War in Florida in 1836 as a musician, but was stricken with measles and had to come back home to Mississippi. On April 27, 1862, thirty-four year old T.J. enlisted in Co. F (the “Goodman Guards”), 34th Mississippi Infantry, along with two brothers, John Wesley and Newton Jasper Blythe. Of the three, John Wesley became an officer, serving as a lieutenant. Remarkably, all three survived the war. T.J., in fact, lived until 1907 and is buried (right) in the Lowry Methodist Cemetery near Ripley along with a son named Henry Patton Foote (lower right) who died in 1898. Blythe’s name might be just another of the thousands of Confederate veterans who are buried in graveyards across the state, except that he happens to be the great grandfather of a U.S. president. Henry Patton Foote Blythe’s son, as it turns out, was a traveling salesman. Killed in an automobile accident in 1946, he died just three months before the birth of his son. Hailing from the little town of Hope, Arkansas, young William Jefferson Blythe III adopted the name of his stepfather when he was fifteen years old. Today, of course, we know him as President Bill Clinton.