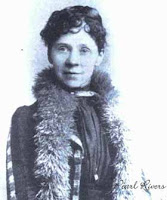 In May, 1872, twenty-two year old Eliza Jane Poitevent, a native of Hancock County, Mississippi - a published author and literary editor of the New Orleans Picayune - married Alva Holbrook, the owner and editor of the newspaper, a man many years her senior. Although the wedding was a celebrated social occasion, the marriage was rocky from the outset. In fact, in a letter to her first love, William Harrison, Eliza admitted that her new husband “never did, and never will” love her. Then, on Monday, June 17, 1872 , things got a lot worse for Eliza Jane. 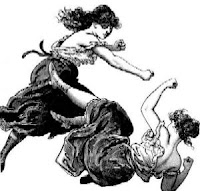 Alva Holbrook had previously been married to a woman named Jennie Bronson. After eight difficult years, the marriage ended in an ugly divorce. To everyone’s relief, the ex-wife, known as a “crazed woman with a Latin temperament,” moved to New York. However, when the former wife heard that Holbrook had married a much younger woman, she returned to New Orleans with vengeance in mind. On the morning of June 17, Jennie Bronson went to the Holbrook house on Constance Street and found Eliza there alone in the bedroom. Brandishing a pistol, the ex-wife fired two shots at Eliza (missing both times). After fighting with the intruder and taking the gun from her, the four-foot tall Eliza was next beaten over the head with a bottle of rum, causing serious head trauma. Hearing the uproar, the servants rushed into the room and in the confusion, Eliza was able to escape to a neighbor’s house. Jennie Bronson, meanwhile, found an ax and proceeded to destroy the furniture in the house. Eventually, she was arrested and hauled off to prison. 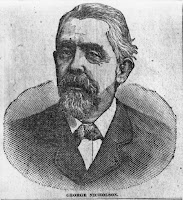 Eliza, due to the injuries received in the assault, had to endure a long recover and an even longer time in the public spotlight. In the ensuing legal mess, it became evident that Eliza had become romantically involved with Holbrook (right) prior to the divorce. Incredibly (perhaps because of that), Jennie Bronson was found not guilty of assault in October 1873 and even managed to wrest control of the house from her ex-husband for a time. All of the lurid details were, naturally, closely followed in the newspapers of the day. Eventually, the Holbrooks regained the house and then moved to a new house on Magazine Street to escape the memory of the terrible event. It was during this turbulent period that the book Lyrics was published (the sales of which were no doubt improved by the scandal).

Not too many years after the attempted murder, Alva Holbrook died, and Eliza inherited the newspaper, making her the first female owner and publisher of a major daily newspaper in the United States. Unfortunately, the paper was $80,000 in debt when she assumed control of the business. Although encouraged to declare bankruptcy, the young widow, aided by the paper’s new business manager and investor George Nicholson, eventually turned the financial condition of the paper around. To do so, she came up with a number of innovations, including departments for women and children, fashion, medical advice, comics and household hints. The introduction of a society page known as the “Society Bee,” was initially considered scandalous because it exposed certain secrets of the well-to-do. By 1890, however, it had become the largest section in the Sunday edition. Also a philanthropist, Eliza Nicholson used the paper's editorial pages to fight cruelty to animals, and was a driving force in the establishment of the Society for the Prevention of Cruelty to Animals in New Orleans.

George Nicholson was more than just a business manager, though. As with Alva Holbrook, Eliza developed a romance with Nicholson, who was married with children at the time. However, his wife died and in 1877, just a year after his first wife died, he married Eliza. From this marriage came two sons, Leonard and York. It was during this period that Eliza enjoyed summers with her blended family at “Fort Nicholson.” In late January, 1896, however, George died during a flu outbreak in New Orleans, and Eliza followed him to the grave two weeks later. Both were buried in the Metarie Cemetery, where they remain today (right). Their deaths left the two sons, both teenagers, orphaned. Management of the newspaper passed first to her estate and thence to Leonard, who was publisher until his death in 1952. Originally buried in Gainesville, Mississippi, Leonard Nicholson’s body was moved to Picayune in the early 1960s to make way for the Stennis Space Center.

Eliza Jane Poitevent ("Pearl Rivers") Holbrook Nicholson's legacy in history is as a poet and groundbreaking newspaper publisher. As her story reveals, however, there was much more to her than poetry and newspaper columns - a life filled with tragedy, romance and adventure.
Posted by Jim Woodrick at 10:44 AM