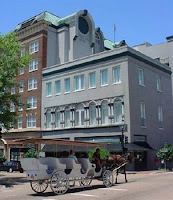 The Eola Hotel in Natchez was built in 1927 and designed by the architectural firm of Weiss, Dreyfous & Seiferth, Inc. of New Orleans. Weiss, Dreyfous & Seiferth designed a number of prominent public buildings in the 1920-1930s, many of them commissioned by Louisiana Governor Huey P. Long, including the “new” Louisiana State Capitol in Baton Rouge and several buildings on the campus of Louisiana State University. In addition to the Eola Hotel (right), the firm also designed the Jung Hotel and Pontchartrain Hotel in New Orleans, all in the late 1920s. They also worked on a number of commercial buildings and experimented with more modern designs in the 1930s, including the iconic Walgreen Drug Store on Canal Street in New Orleans (below, right), completed in 1938.

In addition to their projects in Louisiana, the firm worked on a number of buildings in Natchez, including the renovation of “Montaigne,” the home of former Confederate general William T. Martin, in 1927. They also designed the Henry Clay Hotel in West Point, Mississippi. One of the principals, Solis Seiferth (left) had family ties to Natchez. Seiferth’s uncle, John Seiferth, opened a dry goods store there in 1919 and remained in business for more than fifty years. Considered by some the premier architectural firm in Louisiana during the period, Weiss, Dreyfous & Seiferth remained intact until 1940, when Leon C. Weiss, who designed the B’nai B’rith building in Vicksburg and Beth Israel Temple in Greenwood during World War I era, was convicted of mail fraud in connection with a construction project at Louisiana Tech and sent to prison. Weiss’ conviction was part of the “Louisiana Hayride” scandals. 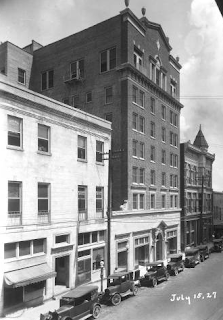 Financing for the new hotel came from the Natchez Investment Corporation, whose president and president of the board of directors were brothers Leon M. Levy and Isidore Levy, respectively. Upon completion, the hotel was leased to the Eola Hotel Corporation, composed mostly of members of the Natchez Investment Corporation. Built at a cost of $750,000, the seven-story hotel at the corner of Pearl Street and Main Street included a coffee shop, dining room (known as the “Palm Room”), auditorium, banquet hall and a rooftop garden. Linking the Main Street façade with the lobby on the Pearl Street façade was a long hall known as “Peacock Alley,” which originally included a series of recessed arches with settees in each archway. The hotel was named for Isidore’s daughter, Eola Levy, who was born in New Orleans in 1893 and died prior to the grand opening of the hotel on July 1, 1927, an event hailed by the Natchez Democrat as a great “symbol of civic progress.” This photo (above) was taken just two weeks after the hotel opened. Unfortunately, within a few years, the Natchez Investment Corporation faltered and ultimately defaulted on its mortgage, a victim of the Great Depression. As a result, the hotel and its contents were sold at auction in 1931. 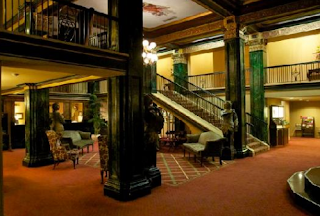 In order to keep the hotel open, a group of concerned citizens purchased the property and operated it until 1974 under the name Natchez Eola Hotel Corporation. Beginning in 1932, the hotel enjoyed many years of prosperity under the guidance of the corporation’s president, Clarence Eyrich, Sr., followed by his son, who was also co-founder of the Cock-of-the-Walk. 1932 was also the year that the Natchez Pilgrimage began, providing the hotel with tourists. By the 1960s, however, the hotel was showing its age and began a period of decline, and closed in 1974. For four years, the hotel sat vacant. Then, in 1978, new investors purchased the old hotel and began a multi-million restoration project. Today, the Eola Hotel continues to be at the center of Natchez’s social scene and a favorite “haunt” for visitors.

This glass came from the old Eola Hotel, and includes
the slogan "Where the Old South Still Lives"
(Photo courtesy of Kevin O'Malley, Jackson, MS)