Prohibition, which made the manufacture, transportation, import, export and sale of alcoholic beverages illegal in the United States, was in effect nationally between 1919 and 1933. Prohibition began on January 16, 1920, when the Eighteenth Amendment went into effect, and was repealed in 1933 with the ratification of the Twenty-first Amendment. After the repeal of prohibition laws nationally, however, some states continue to enforce them. Mississippi, which had made alcohol illegal in 1907, was the last state to legalize the sale of alcohol in 1966. 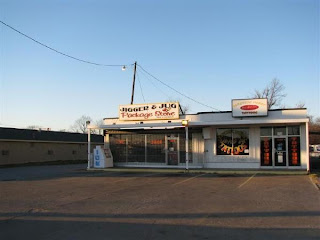 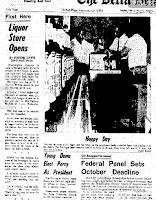 The first legal liquor store in Mississippi following the end of prohibition opened in Greenville on August 6, 1966.  Located on Highway 82, the “Jigger & Jug,” owned by the Azar brothers of Greenville, was granted a liquor license from the Alcoholic Beverage Control Division on Friday, July 29, 1966. While the license granted was actually the second issued in Mississippi (the first was to the Broadwater Beach Resort in Biloxi), the “Jigger & Jug” was the first self-serve package liquor store to open. The first shipment of alcohol arrived at the store from the state warehouse in Jackson on Wednesday morning following the granting of the license. The shipment included 186 cases of whiskey, wine, gin, vodka and liqueurs. The first case unloaded, according to The Delta Democrat-Times, was “Old Granddad” whiskey. A sidebar photograph next to the story (right) was titled simply “Happy Day.” The “Jigger & Jug” is still in operation at the same location, although ownership recently changed hands.

Stephen Thomas Azar was born just two years before the liquor store opened. His father was Joe Azar, one of the original owners of the “Jigger & Jug.” At age ten, Steve Azar started writing songs and developing his talents as a guitar player. Heavily influenced by blues artists in the Greenville area, the young singer first learned about blues music behind his father’s liquor store. “I was hooked on Eugene Powell (Sonny Boy Nelson) who made Blues records back in the 1930’s,” writes Azar, “[and] would hang out behind my dad’s liquor store, sit on a crate and listen to Eugene sing about his day and about his night before. Those were my first lyric writing lessons, even though I didn’t know it at the time.” Azar had his first Nashville recording session at age fourteen. After attending Delta State University, he moved to Nashville in 1993 to pursue a career in music. During his career, he has toured with Bob Seger, Carrie Underwood, Reba McIntire, Tim McGraw, Hootie and the Blowfish and Montogomery Gentry. In 2002, Mississippi native Morgan Freeman appeared in a video of Azar’s song “Waitin’ on Joe.” Since then, Azar has focused on his Mississippi roots and developed a sound he calls “Delta Soul.” He continues to tour and record on his own label, Ride Records. He is scheduled to perform at the Mississippi Agricultural Museum in Jackson for a benefit concert on October 13, 2012.