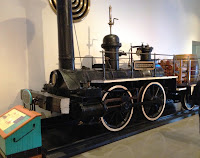 Located in Chicago’s Museum of Science and Industry, nestled under gigantic displays of airplanes and passenger trains from the glory days of the railroad industry, is a small engine named the “Mississippi.” Although nearly lost amidst the glitz and glamor of more modern modes of transportation, the little locomotive nonetheless has an interesting story.

The locomotive “Mississippi” was built in 1834 during the early days of railroad expansion. A small engine even for its time, the “Mississippi’s” exact origin is a bit of mystery. The locomotive is generally credited to the English firm of Braithwaite and Milner, although there is some dispute on that score. If the company did manufacture the “Mississippi,” however, the firm was at the time known as Braithwaite and Ericsson. Both men were ahead of their time and made several advances in engineering. John Braithwaite, for example, designed and built the first steam-powered fire engine. Although the contraption was capable of pumping two tons of water per minute, the jealousy of the human fire brigades ultimately sank the project (no doubt they feared replacement by a machine). He also obtained a patent for extracting oil from shale, a fairly widespread practice in the mid-19th Century (and once again a topic of debate).  The Swedish-born John Ericsson collaborated with Braithwaite to produce a number of early steam locomotives. Ericsson is best known, however, as the designer of the U.S.S. Monitor. Although not a particular admirer of the Union war effort, Ericsson (above) sold his design to the United States and the ship was built in 1862 in just 100 days and launched in time to take on the Confederate ironclad Virginia. Ericsson had tried to sell the design to the French government in 1854, but to no avail. 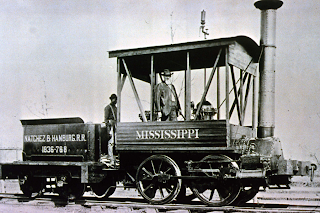 Whether designed by Braithwaite and Ericsson or not, the “Mississippi” was most likely assembled in New York City before being shipped to Mississippi, where the engine operated on the Natchez & Hamburg Railroad, a 19-mile long line from Natchez to Hamburg, Mississippi, located in Franklin County south of Fayette. It was later purchased by another railroad company and used to deliver cotton on a line near Vicksburg, and may have been used to transport supplies during the Civil War. After the war, the little locomotive operated on a short line between Vicksburg and Warrenton and reportedly derailed in 1874. Left submerged in mud and nearly forgotten, the engine was purchased in 1880 by J.A. Hoskins, who repaired the locomotive and put it back in service on a line near Brookhaven known as the Meridian, Brookhaven & Natchez Railroad, all of seven miles in length. James Hoskins was no stranger to railroads. During the Civil War, he was a captain in command of the Brookhaven Light Artillery. In June, 1862, men from Hoskins’ Battery, as it was known, converted a locomotive and rail car on a rail line near Grand Gulf into an armored train (perhaps the first in history), firing an artillery piece mounted on the car at the Federals. It’s at least possible that the engine used in this affair was the “Mississippi.” Regardless, when the Illinois Central Railroad purchased Hoskins’ Brookhaven railroad line in 1891, the now-outdated locomotive was no longer of much use. Rather than sell it for scrap, however, Hoskins had a better idea. He donated the engine as a piece of railroad history.

In 1893, the “Mississippi” traveled under its own steam power to Chicago to be part of the World's Columbian Exposition. Also known as the Chicago World’s Fair, the exhibition was held to celebrate the 400th anniversary of Christopher Columbus’ arrival in the New World. More importantly, the Exposition put on display the latest in technological advances and cultural achievements, as well as to promote the wonders of Chicago. The event was funded in part by prominent businessmen, including the Chicago shoe tycoon Charles Schwab. Covering 600 acres, the fair included hundreds of exhibit halls from around the globe and attracted more than 27,000,000 visitors. During the event, the “Mississippi” was housed at Jackson Park.

After the 1893 fair ended, the locomotive was moved to a building that had been used as the Palace of Fine Arts (above) during the World’s Fair. The “Mississippi” was displayed again, after being refurbished, at the Chicago World's Fair of 1933-1934. Four years later, the engine was permanently installed in the Museum of Science and Industry, which was the brainchild of philanthropist Julius Rosenwald, who gave more than $3,000,000 in 1926 to help restore the former Palace of Fine Arts building, which by that time had fallen into disrepair, and create a world-class museum of science. Due to Rosenwald’s influence the building was saved and the musuem was opened in 1933. Rosenwald is perhaps best known for establishing the Rosenwald Fund, which provided millions in matching monies to support the education of black children in the rural South. Since 1938, the locomotive “Mississippi” has been on display at the Museum of Science and Industry in Chicago. With all likelihood, she will never make a return trip. 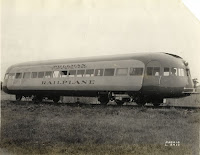 Interestingly, there is another Mississippi connection to the 1933-34 World’s Fair, also known as “A Century of Progress,” the purpose of which was to celebrate Chicago’s centennial and to highlight technological innovations. The fair's somewhat curious (and a bit disturbing) motto was "Science Finds, Industry Applies, Man Conforms.”  Among the technological innovations at the World’s Fair was an experimental gasoline-powered railroad car called the Pullman Railplane (right). Designed by an engineering firm in Dearborn, Michigan, and built in 1933, the streamlined, self-propelled railroad car had an aluminum body and was powered by two gasoline engines. At full speed, the car was capable of reaching speeds of 90 mph. After its unveiling at the World's Fair, the car was leased to the Gulf, Mobile & Northern Railroad (later to form part of the G.M.& O.) in 1935 and used – of all places –  between Tylertown and Jackson, Mississippi. Although the railplane saw some commercial use, the experimental car failed to attract any investors and was eventually shelved. By the time World War II arrived, the idea was a thing of the past.