The Mystical Seven and the Temple of the Star 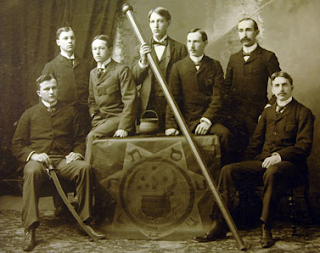 The Mystical Seven was once a secret society founded on the campus of Wesleyan University in Middletown, Connecticut in 1837. A social fraternity, membership was kept secret and was confined to upperclassmen of a certain social status. Within four years, the Mystical Seven expanded its membership to other campuses. In 1841, Henry Branham, who transferred from Wesleyan to Emory, was given permission to start a chapter (or “temple”) there and he convinced Augustus Baldwin Longstreet, the college president, to join. Longstreet (1790-1870) was a graduate of Yale, a lawyer and a prominent Methodist minister. A prolific writer, he wrote a series of articles which were later compiled into a book called Georgia Scenes, a book of Southern humor. More significantly, he wrote several treatises in defense of slavery and in support of a separate Methodist Episcopal Church in the South.  In 1839, he became president of Emory College, and later Centenary College in Louisiana. From 1849-1856, Longstreet was chancellor at the University of Mississippi. He was an uncle of James Longstreet, the future Confederate General.

When Branham brought Longstreet into the fold of the Mystics, Longstreet’s two daughters also joined (the society was co-ed at the time). The members met each week in the “Temple of the Wand,” located in the attic of North College building on the Wesleyan campus. The rituals apparently included marching through cemeteries with a cavalry sword, rolling cannon balls across the North College floor and wielding the seven foot “Mystical Wand.” In 1906, the North College building burned, leaving a smoldering pile of ruins (top right), supposedly due to a candle and was replaced with a seven-sided building with seven-sashed windows and a seven-paneled door. This building, dedicated in 1912, burned to the ground in 1995, also due to an unattended candle. A rival secret society’s building (the Skull and Serpent’s), still stands on campus. This building (lower right), known as “The Tomb,” was designed by architect Henry Bacon, who also designed the Lincoln Memorial in Washington. 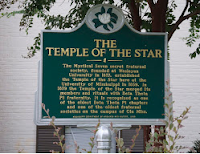 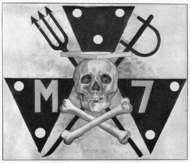 The Mystical Seven, or least the name, continues today however (actually two rival groups with the same name now exist at Wesleyan University). Other similarly named but not directly related secret societies also exist, including the Seven Society, founded at the University of Virginia in 1905. Membership in the society is secret and is revealed only upon the death of a member, when a banner appears at the funeral, and in years past a wreath of black magnolias in the shape of a ‘7’ would be sent to the funeral service. Communications with members of the society at UVA are traditionally left at the base of the Thomas Jefferson statue inside the Rotunda. A group known as the Mystical Seven is also the University of Missouri, although it does not appear to be related to the original society.