Kemper County, Mississippi, is the site of an enormous electric power plant fueled by a coal gasification process. Known as the Kemper Project, the plant is set to begin operation in 2014. Given the size of the plant, it is sure to have an impact on the region’s economy. The Kemper Project is not the first industrial plant associated with electricity to locate in Kemper County, however. Though not on the same scale, the Sumter Lumber Company, also known as Electric Mills, transformed the area in the early twentieth century and in the process established a thriving, self-sustaining and modern community. ­

Originally located in Sumter County, Alabama, the Sumter Lumber Company relocated to Kemper County, Mississippi in 1911 after the Alabama mill burned the previous year. Besides, the mill had already exhausted the timber resources at the Sumter County site, so the owners moved the operation across the state line. The original plant was located on the Alabama Great Southern Railroad and the new plant was similarly situated, taking advantage of an existing stop on the Mobile & Ohio Railroad known as Bodga Station south of Scooba and on an old line known as the Mississippi, Gainesville & Tuscaloosa, which had its terminus at Narkeeta. The abandoned rail line served as a dummy line to the plant. Construction of the mill began in May 1911. Like the Finkbine mill at D’Lo (which went into operation in 1916), the Sumter mill (above) was all-electric and generated its own power. By the mid-1920s, the mill was operating with two shifts and had a cutting capacity of 300,000 feet per day of virgin, shortleaf pine harvested from the company’s vast holdings of 165,000 acres.

Along with the mill, the Sumter Lumber Company constructed the nearby town of Electric Mills, so named because Sumter was among the earliest all-electric facilities in the region. As with other companies, the owners spared no expense in building a community for its workers and made every effort to create a self-contained town, including a company store, a church, two schools, and recreation for the mill’s families. The town also had electric lights generated by the plant, so the community was quite advanced for the period. Workers enjoyed use of a club house, a children’s playground, an extensive library, two theaters, an ice cream parlor, and an ice plant. A "union" church (above left) provided religious services each week, with Methodist, Baptist and Presbyterian clergy preaching there on a rotating basis (the Methodist pastor preached twice each month). The town even had its own baseball teams. Among those who played for the company club was Henry Presswood, who was born at Electric Mills in 1921. Presswood (left) played professional baseball in the Negro Leagues with the Cleveland Buckeyes and the Kansas City Monarchs  from 1948-1952, after which he went to work at Inland Steel in Chicago and played for their company team. Presswood retired from Inland Steel after thirty years. In 2010, Hank “Baby” Presswood was honored with his own baseball card in recognition of his years playing shortstop in the Negro Leagues. Now 92 years old, Pressman lives in Chicago and remains a dedicated baseball fan. In addition to the schools and church and recreational amenities, the little town also had a modern, 52-bed hospital for the mill workers and their families. The George C. Hixon Memorial Hospital included an x-ray room and equipment to repair fractures and was available to other people in the region. The hospital was staffed by a chief surgeon and two assistant doctors with a full complement of nurses and technicians, making it a model health care facility for the time. Health care at the hospital was provided at no cost to the workers (a bonus on top of what was already considered a generous wage). Needless to say, the turnover rate for mill employees was fairly low.

The George C. Hixon Memorial Hospital (right) was named for George Cooley Hixon, a lumber baron from Chicago. George’s father, Gideon C. Hixon, was a prominent political figure and businessman in Wisconsin who built a lumber empire spanning multiple states by the time of his death in 1892, at which time George and other members of the family were left to run the company. Over the next two decades, George Hixon invested heavily in timber and wheat and other commodities and in the process became a very wealthy man. In 1920, for example, he lived an expensive apartment on East Lake Shore Drive in Chicago. The apartment building (lower right) was designed by architect Benjamin Marshall. Although not formally trained as an architect, Marshall was inspired by the “White City” of the World’s Columbian Exposition in Chicago in 1893 and learned the trade as an apprentice. In 1905, Marshall formed his own architectural firm with Charles Fox. In addition to a number of exclusive high-rise apartment buildings along the waterfront in Chicago, Marshall & Fox also designed the Edgewater Gulf Hotel in Biloxi and the Markham Hotel in Gulfport. While the Markham still stands, the grand old Edgewater – which included gardens, tennis courts, a golf course and an enclosed swimming pool – was demolished in 1971 in order to expand the Edgewater shopping mall. The apartment building occupied by George Hixon, meanwhile, has been renovated and is now a high-end residential property in Chicago.

Considering Hixon’s success in business, his Ivy League education (he was a Yale graduate) and his political connections, it would be logical to assume that he would marry into the social elite of Chicago. After all, he was a member of several exclusive clubs, including the very selective Midwick Country Club in Pasadena, California, where members paid a staggering $3,800 initiation fee for the privilege of playing polo with the likes of Will Rogers, David Niven, Spencer Tracy and Walt Disney. Instead, he married Blanche Kelleher on Thanksgiving Day in New York City in 1900. Blanche was a stage performer and the daughter of Alfred J. and Susannah Kelleher, both musicians. In fact, Alfred was a professor of music in San Francisco who studied in London at the Royal Academy of Music. After performing in the opera in New York, he moved to California to teach voice at Mills College. Blanche followed in her parents’ footsteps and regularly appeared at festivals and shows. After marrying George and moving to Chicago, she continued to perform and during the First World War volunteered as a Y.M.C.A overseas entertainer and a member of the Stage Women’s War Relief. Life was indeed good for George and Blanche Hixon. Then, on April Fools’ Day in 1923, he died of cancer at the age of fifty-two and was buried in La Crosse, Wisconsin, with the rest of the Hixon family. His monument (above right) is appropriately elaborate for a man of his wealth and prestige. Blanche, meanwhile, lived another twenty-four years and died in California in 1947. She never remarried and the couple had no children. 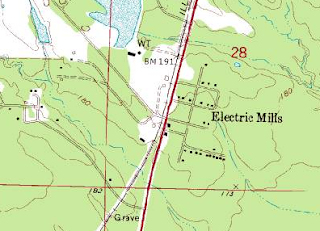 In Kemper County, Mississippi, of course, there was another memorial to George Hixon, and that was the hospital at Electric Mills. The town and the mill continued to serve the area until 1940, where rumors began to circulate that the mill was about to close. The reason was obvious: the timber supply was quickly disappearing. By September, 1941, Sumter Mills was finished and approximately seventy-five workers were out of a job. Luckily, there was plenty of work available at the shipyards in Pascagoula and Mobile, as the United States was preparing for another world war. Although there were jobs available, Electric Mills had been home to many for decades and had been a good place to live and raise a family. In a short time, Electric Mills, once known as the “brightest town south of St. Louis” because of its electric lights, was a virtual ghost town. Within a few months, Mississippi Governor Paul Johnson abolished the town’s incorporation, as only 100 inhabitants remained. Today, Electric Mills exists only as an intersection on Hwy. 45 with a few houses and, appropriately enough, a lumber yard.