In Vicksburg, there is a monument erected to a hero, though he is not a military figure. The monument is in memory of a prominent man, though he was not a politician. And the monument pays homage to someone who wasn't very well liked, though he was greatly loved by the people of Vicksburg at the time of his death. 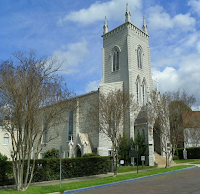 Born in 1812, Stephen Patterson was a native of Ireland and an 1838 graduate of the University of the City of New York. An Episcopal minister, Patterson became the rector of Christ Church (right) in Vicksburg in 1845 and became a prominent member of the Mississippi Diocese. In 1849, he was part of the clergy delegation which voted unanimously to elect William Mercer Green of North Carolina as bishop of Mississippi, and was a member of the Standing Committee, serving at its president in 1851. Patterson was also an organizing member of the “Society for the Diffusion of Christian Knowledge in the Diocese of Mississippi,” a long-winded name for a missionary effort which, among other things, sought to include slaves in the Episcopal Church. All this made Rev. Patterson (left) an influential person in ecclesiastical circles but the red-headed Irishman was not, apparently, easy to get along with. Considered “intolerant of human error, pitiless in his moral judgments, and altogether lacking in the common social graces that endear people to one another,” Patterson must have seemed a poor choice to shepherd a congregation. Despite his lack of charm, he continued to serve as pastor of Christ Church until his death in 1853 during a particularly virulent yellow fever epidemic. 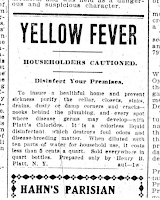 Yellow fever outbreaks not were uncommon in the river country along the Mississippi in antebellum times. In fact, the disease remained a major concern until the early twentieth century when medical science finally diagnosed the cause. Before then, all manner of cures and precautions were undertaken to try and stem the tide of the fatal disease which all too often claimed whole families as victims, as cemeteries across the South still attest. In 1853, one of the worst outbreaks of yellow fever hit the region. In New Orleans alone, where the epidemic apparently began, nearly 8,000 died that summer alone. Unfortunately, business interests in New Orleans feared that news of the disease would cause the city to be quarantined and, thus, word was not sent to other communities until nearly 1,000 had died in the Crescent City. As a result, the fever spread to other towns up and down the river before the outbreak could be contained. In time, dozens of Mississippi towns were devastated, including Bay St. Louis, Natchez, Yazoo City, Jackson, Greenwood, Brandon, Port Gibson, Woodville, Biloxi and Vicksburg. In Vicksburg, the yellow fever epidemic cut the population in half, either from death or from citizens fleeing the city. In all, there were more than 2,000 cases reported at the time with nearly 500 deaths, representing approximately 10% of the population. As one might imagine, the illness caused widespread panic among all of Vicksburg's people, rich and poor, slave and free. Yellow fever, it seems, had no respect for place or station. 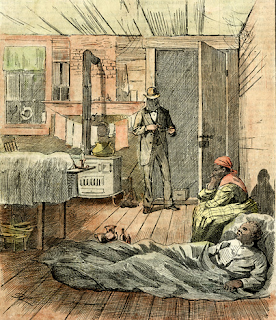 When societies are faced with a crisis of unknown origin, people often look for a scapegoat. In this case, blame for the epidemic’s arrival in Vicksburg was frequently credited to "peddlers" who traveled by boat from New Orleans. Of course, "peddlers" was sometimes a thinly veiled reference to Jewish or other foreign-speaking merchants. Rev. Charles Kimble Marshall, a prominent Methodist clergyman in Vicksburg, reported that six "peddlers" arrived in June and took residence in a boarding house on Grove Street. With them came the dreaded disease, he asserted, and the fever spread due to the incompetence of a local doctor who failed to properly isolate the outbreak immediately. The doctor, Marshall said, was “a most infamous quack," who proved to be the “most miserable cheat that was ever allowed to test the gullibility of poor sick humanity. Fortunately..." he wrote, “he died of the fever.”  Dr. A.L. Magruder, whose two-story brick office and residence was located on Cherry Street, also believed the disease was spread by those who arrived on the steamboats from New Orleans. In the case of a Mrs. Lanier, who died with the “black vomit,” Magruder identified “a Jew pedler” who came to Vicksburg and, after unpacking his goods, went house-to-house selling his wares. When Mrs. Lanier purchased a dress from him, she was seized with the fever the very next day (curiously, another person reported that it was actually Mr. Lanier who purchased the dress and brought it from New Orleans). While Dr. Magruder blamed the "Jew pedler," others identified the Northern winds, the excessive heat, and "mould" as possible culprits – none of which was actually the real cause. Yellow fever, of course, is borne by mosquitoes, but no one knew that at the time. 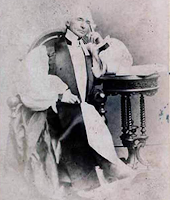 While many looked for someone or something to blame for the terrible situation at hand, others rolled up their sleeves and went to work tending to the sick and dying in the hospitals and homes filled with the afflicted. Across the South, there were men and women who bravely risked the very real threat of contracting yellow fever themselves. Many died as a result. In Vicksburg, one of those who decided to risk everything for the sake of others was the red-headed Irish priest, Stephen Patterson. Although not known in daily life for his warmth or compassion, Patterson worked tirelessly to relieve the suffering of Vicksburg's people, working in the hospitals, feeding and bathing patients and providing spiritual comfort to those near death. Patterson ultimately paid the price for his labors by contracting yellow fever himself and died on September 14, 1853. Rev. Patterson was buried next to the church he served, but his funeral did not take place for another three months. By that time, the threat of yellow fever had passed for the season. On December 4, Bishop William Mercer Green (right) preached Patterson's funeral sermon at Christ Church. His remarks were published the next year as a 22-page "discourse." Nothing Bishop Green said that day, however grandiose and eloquent, could match the sacrifice of the good reverend though. To honor that sacrifice, the parishioners erected a monument to their friend and pastor. Today, the monument (left) still stands next to Christ Church in Vicksburg.