St. Mary of the Pines 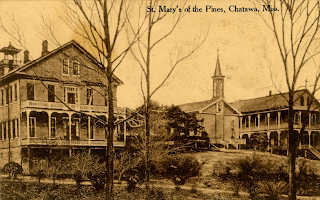 Way down south in Mississippi (near the border with Louisiana), is Chatawa, located in Pike County. Established in the mid-1850s, Chatawa has never been much more than a stop on the railroad and a post office, with one exception: St. Mary of the Pines. In 1868, the Redemptorist Fathers of New Orleans, a missionary society of Catholic priests, were looking for a rural retreat. According to the story, as they made their way north on the New Orleans, Jackson & Great Northern Railroad, the train happened to break down at Chatawa. While they and the other passengers waited, the priests were impressed with the natural beauty of the area and decided to make it the site of their retreat. After several more trips were made to inspect the area, they eventually purchased nearly 300 acres from local families and built a chapel in 1869, constructing it from an on-site sawmill owned and operated by the priests. In 1872, the Rev. Thaddeus Andwander invited the School Sisters of Notre Dame to come to the area to teach local children. They arrived two years later and began teaching school and opened a boarding school for girls in 1875. 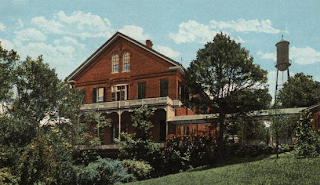 All was not well with the Redemptorist Fathers, however. The truth was that they were having a very difficult time of it, struggling to raise crops and to meet financial demands. So, in 1879, the Rev. Nicholas Jaekle wrote Mother Caroline Friess in Milwaukee to offer the property for sale to the School Sisters of Notre Dame for $9,000. This they gladly agreed to do, and the Redemptorists were finally free of Chatawa. With the sale, the Redemptorist priest who recorded the event wrote "We are rid of Chatawa - Deo gratias!" 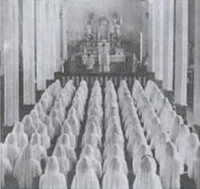 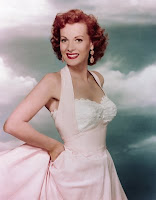 While the Redemptorist Fathers were unable to make a go of it at Chatawa, the School Sisters of Notre Dame flourished. The sisters operated a school on site for a century and constructed several prominent buildings, including two three-story dormitories in 1908. Known as Ryan and Newman Hall, the buildings including wide galleries on which the girls frequently slept, even in winter months. In 1965, however, most of the older buildings were replaced, including the original chapel, known as St. Theresa’s. The photo to the right was taken in 1939 inside the chapel. In 1941, it was the scene of a celebrity wedding: Irish-born actress Maureen O’Hara (lower right) married William Houston Price, a native of McComb, in the old chapel at St. Mary’s of the Pines. Price was the dialogue coach for O’Hara’s 1939 film The Hunchback of Notre Dame and also worked as a technical advisor for Gone with the Wind (he was there to coach the actors with proper Southern accents). The marriage lasted twelve years, ending in divorce in 1954. Price died in 1962. O’Hara is still living, and now resides in Idaho with her grandson and son of Will Price and Maureen O’Hara’s only child, Bronwyn FitzSimons Price, born in 1944. 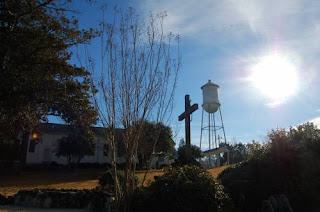 While the school closed in 1975 after one hundred years of service to the community, the site is still in use. Today, St. Mary of the Pines is a retreat and renewal center operated by the Dallas Province of the School Sisters of Notre Dame, and serves as a retirement home for the sisters.
Posted by Jim Woodrick at 3:27 PM