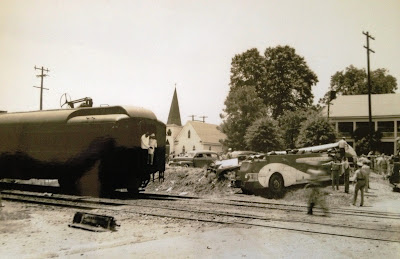 On Wednesday, August 5, 1942, just after 1:00 p.m., a Greyhound bus on a routine New Orleans to Jackson run was hit by a southbound passenger train on the Illinois Central Railroad line. The bus, loaded with fifty-two passengers, had just completed its scheduled stop in Crystal Springs and headed toward Hwy. 51 on the way to Jackson. The passengers included a number of United States Army Air Corps cadets and at least one newly married couple. Although there have been many accidents involving trains and passenger vehicles through the years, the severity of this particular wreck is still remembered in Crystal Springs.

Crystal Springs, located in Copiah County, was organized in the 1820s and named for a number of clear springs in the area. In 1858, the town, such as it was, moved about one and a half miles west of the original site to take advantage of the railroad (at the time known as the New Orleans, Jackson & Great Northern). As with many communities in Mississippi, the town prospered with the coming of the railroad. By the 1870s, Crystal Springs started shipping vegetables via the railroad to markets across the country, especially tomatoes, earning Crystal Springs the nickname “Tomatopolis of the World.” Today, Crystal Springs hosts an annual tomato festival to celebrate the town’s commercial agricultural heritage. 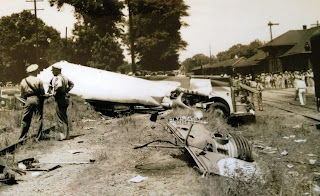 On the fateful day of the accident, the railroad which had brought prosperity to the town instead delivered death and destruction. On that day, the Greyhound bus had stopped at the railroad crossing to wait for a northbound freight train to clear the intersection. Once the last car of the freight train had passed, the bus driver proceeded to cross the tracks, unaware that a fast-moving, south-bound passenger train was bearing down the second set of tracks. That train was an Illinois Central Railroad special troop train. Although the driver attempted to avoid the collision, the train slammed into the rear of the bus. The force of the impact tore away the rear engine and the roof of the bus. Witnesses later told the Highway Patrol that the bus was lifted off the ground and carried for some distance before overturning, and came to rest upside down with the front facing back toward the tracks. To make matters worse, the accident happened to fall on the first day of school, and first reports were that the train hit a school bus, causing a near-panic in town. Once the rumors were dispelled, the townspeople began the task of clearing away the debris and caring for the wounded, many of whom were taken to hospitals in Jackson.

The bus was carrying an equal number of cadets and civilians (26 each). Casualties also included some who were standing along the tracks waiting for the trains to pass, including Thelma Boatman Dodds of Osyka, Mississippi, who was killed when the bus overturned on the sidewalk where she was standing. Mrs. Dodds, by all accounts, had been trying to warn the driver of the danger. The little town of Osyka suffered two casualties that day – Mrs. Zellie Cutrer was also killed in the accident.* Mrs. Fannie Johnson Smith (right) of Crystal Springs was on her way to Jackson to visit relatives. Her niece and nephew, Mr. and Mrs. Earl Patterson of Jackson, had been visiting her in Crystal Springs. Both were seriously injured in the crash. Mrs. Smith, 44, was buried at the Old Crystal Springs Cemetery.

All told, the accident claimed the lives of fifteen passengers and injured thirty-two others. Among those who died or were injured were citizens of eighteen different states, including Mississippi. The United States Army Air Corps cadets were going to Jackson en route to a new training post at the Greenville Army Flying School. Among the cadets killed was Richard H. M. Shinebarger of Erin, New York. Shinebarger married his wife Wilma just a month before, on the Fourth of July, in Ocala, Florida. After graduation from his high school, where he was the valedictorian, Richard enrolled in the Alfred University School of Ceramics, still considered the top school of ceramic arts in the country. Richard left in his junior year to join the Air Corps. His wife Wilma was a 1941 graduate of the Arnot-Ogden Hospital School of Nursing in Elmira, N.Y. before meeting Richard. Both were 21 years old. Geddie Roy ("Bill") Smathers, Jr. of Charlotte, North Carolina, (left) was also killed in the wreck. Smathers, aged 20, had worked as a bookkeeper at the American Trust Company in Charlotte before enlisting in the Army Air Corps. His father, Geddie Roy Smathers, Sr., a veteran of the First World War, was left behind to mourn the death of his son. Smathers died at Baptist Hospital in Jackson.

The tragic accident in Crystal Springs made national headlines (including the front page of the New York Times), even though events worldwide demanded constant attention. In short time, of course, the horrors of World War II overshadowed the bus wreck in Mississippi and was mostly forgotten except by those who lost loved ones in the crash. The people of Crystal Springs, however, have not forgotten the dead and in 2008 erected a state historical marker at the site of the accident.