On a recent trip to Krakow, Poland, I visited the Wawel (pronounced “Vaw-vul”), which is the historic castle complex of Polish kings and queens, as well as the site of Wawel Cathedral, the “national” church of Poland where most of Polish royalty are buried. As visitors ascend Wawel Hill to enter the castle complex, an impressive equestrian statue (right) looms above the entrance. Although I didn’t realize it immediately, the name on the plague was a familiar one, even in Polish: it was none other than Thaddeus Kosciuszko. While I knew that Kosciuszko was Polish, I mostly associated the name Kosciusko (without the ‘z’) with the Mississippi town along the Natchez Trace in Attala County. Frankly,  I did not expect to run into him in Krakow. Had I done a little bit of reading about him before my visit, though, I would not have been surprised one bit, because Thaddeus Kosciuszko is perhaps the greatest of Poland’s heroes.

Kosciuszko was born in Poland in 1746. An engineering student at the Cadet Academy in Warsaw, Kosciuszko continued his studies in Paris before coming to America in 1776.  He came here to offer his services as an engineer during the American Revolution and was commissioned a colonel by the Continental Congress.  Not just a military officer, Kosciuszko was a dedicated patriot who sincerely believed in the cause of liberty, not just in the Americas but in his homeland as well. Impressed with the Declaration of Independence, Kosciuszko met Thomas Jefferson and the two became friends. During the war, Kosciuszko helped build fortifications at Philadelphia and at Saratoga, New York, before becoming the chief engineer at West Point (long before West Point became the United States military academy). Kosciuszko’s fortifications at West Point made the place virtually impregnable.  He was promoted to Brigadier General in 1783 and was awarded the Cincinnati Order Medal by George Washington. Washington also gave Kosciuszko two pistols and a sword as thanks for his service to the young nation. 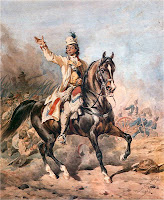 After Revolution ended, Kosciuszko went back to Poland to help his own country win its independence from foreign powers.  On April 4, 1794, he successfully led troops in the battle of Raclawice (right), which resulted in the liberation of Warsaw. The revolution ultimately failed, however, and Kosciuszko was wounded and taken prisoner by the Russians. Released from prison, he came back to the United States in 1797, where he received a hero's welcome in Philadelphia. His home in that city is now a national monument.  Kosciuszko spent the last few years of his life in Switzerland and died at the age of 72 in 1817.  Although Jefferson declared that Kosciuszko was a “son of liberty” in America (and he was an earliest advocate for the emancipation of slaves), he never saw the liberation of his own homeland. In fact, Poland would not be freed from foreign domination until the latter half of the 20th  Century. Today, Kosciuszko is celebrated in Poland as a national hero, and is buried at Wawel Castle along with the kings and queens of his native land.

Kosciusko, Mississippi, was originally known as “Redbud Springs,” but was later renamed to honor Kosciusko (but without the ‘z’) because of his contributions to the American Revolution. There are several other place names in Mississippi which honor heroes of the Revolution, and there are few other places in the United States named to honor Kosciusko. For instance, there is a town in Texas named for him (also with the ‘z’), as well as a county in Indiana. Interestingly, Monmouth, Illinois, was originally supposed to be called Kosciuszko (with the ‘z’) after the name was drawn from a hat, but it was decided that the name would be too hard to pronounce. 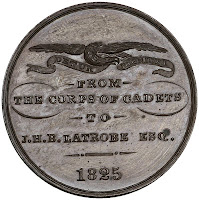 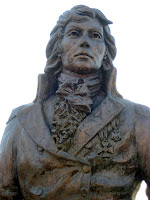 There are also several monuments to Kosciusko in the United States, including Chicago, Milwaukee, Scranton, Boston, Washington and at West Point. The latter was erected in 1913, but the base was designed and dedicated in 1828 by John Hazlehurst Boneval Latrobe. Latrobe was an author, artist, lawyer and inventor who founded the Maryland Historical Society. In 1834, Latrobe recorded his journey from New York to Natchez in a journal. His descriptions of Natchez and New Orleans and his observations about travel on the Mississippi River are a pleasure to read. More significantly, perhaps, J.H.B. Latrobe was the son of Benjamin H. B. Labtrobe, the architect and designer of the U.S. capitol. The monument at West Point designed by the younger Latrobe was commissioned by the Corps of Cadets. The reward for the winning design was a medal (above right). On the reverse side of the coin was an image of the monument base. The most recent monument erected to honor the memory of Kosciusko was in 2006 (above left). Located in Redbud Springs Park in Kosciusko, Mississippi, the monument is the work of sculptor Tracy Suggs.

Thaddeus Kosciuszko never made it to Mississippi (or Texas for that matter) but his memory lives on in his adopted homeland. Although he never knew freedom for his own country, he is finally at rest in a free Poland, where he is revered as a national hero. Oh, and they spell his name with the ‘z’ intact.