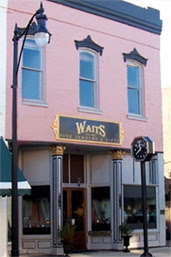 Located in downtown Corinth, Waits Jewelry and Fine Gifts has been in operation since before the turn of the 20th Century.  Opened in 1892, the jewelry store is housed in a building constructed about 1870. A former saloon and later a post office, the building retains many features of its original design, including cast iron cornices and pressed-metal ceilings. As interesting as the historic structure is, however, the story of the jewelry store’s original owner is even better.


James Waits, a native of Alabama and a Confederate soldier, was stationed in Corinth during the war. Captured and sent to prison, he returned to Corinth after the war ended and opened a watch shop at the corner of Fillmore and Waldron Streets. In time, the watch shop turned into a jewelry business and Waits purchased the store on Fillmore in 1892.  In 1873, James E. Gift, who had been a private in Co. M, 5th Ohio Cavalry during the Civil War, also moved to Corinth and went to work for James Waits. A watchmaker, Gift was apparently a very good businessman (or at least made timely investments), as he would later become president of the Corinth Bank and Trust Company and the Alcorn Electric Light Company. When James Waits died, Gift continued to operate the jewelry store and married his partner’s widow, Ada.

Born to James and Ada Waits was a son, Ernest Farris (E.F.) Waits. Waits was also a jeweler and a watchmaker, but he was so much more than that.  A man with boundless energy and curiosity, he was an inventor who pushed the boundaries of early 20th Century technology. He might be considered Corinth’s Ben Franklin.  In 1902, E.F. Waits was appointed as a weather reporter for the U.S. Government and worked on perfecting a set of instruments for determining atmospheric conditions.  A few years later, he built a wireless radio station. Operating from the upper story of the jewelry store, Waits’ wireless station was the third largest in the United States at the time and could reach up to 2,000 miles (he was able, in fact, to communicate to ocean-going vessels).

In 1910, Waits built an airplane.  The type of plane he built was a Demoiselle Monoplane, a small single-engine, single-person craft.  Max Wessner, a former professional wrestler, copied the design of the plane from newspaper pictures and convinced Waits to back him financially and technically in building the machine on the third floor of a drug store next to the jewelry store.  The result was the first known airplane built below the Mason-Dixon Line.  According to a contemporary news account, “After the completion of the machine it was carried to a field two miles south of the city where the first hop was made in it...many spectators were present. Mr. Waits climbed into the cock-pit and gave the word to ‘shove off.’  The little plane slowly rose into the air and soared about 100 feet, coming down in a tree top.” Waits was injured in the affair but recovered in time and continued to fly. Warning its readers about the possibility of seeing the flying machine about town, the paper wrote that “if you should see a monstrous-sized bat-like thing sailing far overhead, don't be scared into a conniption fit, but just remember that it is Mr. Waits or Mr. Weesner out enjoying a few whiffs of pure altitudinous air." The next year, Waits and Weesner took the plane to St. Louis, where it was displayed at a national exhibit. 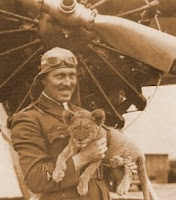 Because of his interest in flying, Waits was close friends with Roscoe Turner, Corinth’s famous aviator (more about him in another blog). Turner flew Waits’ Demoiselle on several occasions and even visited Waits’ store with his pet lion Gilmore. Gilmore was given to Turner (seen here together) as an advertising gimmick by the Gilmore Oil Company. When the lion died in 1952, he was stuffed and mounted in Turner’s home. The lion’s remains were later sent to the Smithsonian, where Gilmore remains in storage.  E.F. Waits also built an x-ray machine in the upstairs of his jewelry store, one of the few x-ray machines in the South at the time, and he patented an optometric device.  Because of his knowledge of clocks and watches, he was given the job of keeping the town’s clock in working order, and the official time was based on Mr. Waits’ store clock. For his official clock-keeping duty, he was paid the sum of $25 annually. Aside from being an inventor, Waits was an artist and painted several scenes of the changing seasons above the showcases in his store. The hand-painted murals are still on display. He also organized a group called the Sea Scouts in 1932. Composed of Eagle Scouts, the group managed to build a boat at a local lumber company and then launched it in the Tennessee River at Shiloh. One of his Sea Scouts – a Mr. Cleburne Wiggington - was a member of Waits’ wedding party in 1934. The bride, Miss Eugenia Lynch, had worked at the jewelry store for four years before the two were married. 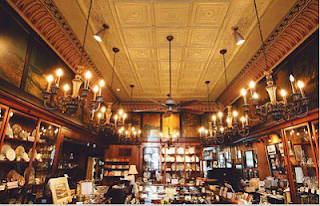 E.F. Waits died just four years later, and Eugenia took over operation of the store. For many years thereafter, she faithfully maintained the store as it was when her husband ran it, including the painted scenery. Serving generations of customers, Mrs. Waits worked at the store from 1926 to 2002, a total of 76 years. By keeping the memory of her husband alive and maintaining the store as he had, Waits Jewelry and Fine Gifts is a treasure trove of history. Operated since 2006 by Sandy and Rosemary Williams following a renovation of the building, the Waits store continues to be a part of Corinth’s history and heritage.