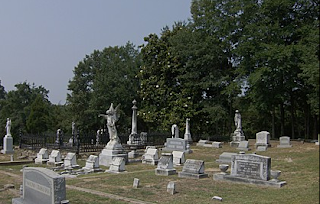 Established in the early 1830s, the original Brandon Cemetery contains more than one thousand graves, and includes a number of prominent citizens of Mississippi. The earliest grave dates to 1834, six years after the town of Brandon was established. Two governors of Mississippi, Anselm McLaurin and Robert Lowry are also buried there. 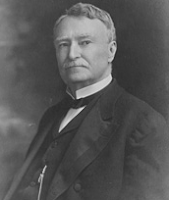 Born in Brandon in 1848, McLaurin attended the Summerville Institute and became a lawyer, establishing his legal career in Raleigh, Mississippi. Although very young, he joined the 3rd Mississippi Cavalry (State Troops) and rose to the rank of captain of scouts by the time of his discharge in 1865. McLaurin first entered politics as the district attorney of Smith County, and was later elected to the Mississippi House of Representatives . He also served as a delegate to the 1890 Mississippi Constitutional Convention and was in the U.S. Senate from 1894 to 1895 and again from 1901 to 1909.  He was elected governor in November 1895.  During his term as governor, McLaurin (above, among other things, vetoed a bill to build a new state capitol in Jackson. He was the last Confederate veteran to serve as governor of Mississippi and the first to be elected under the current state constitution. In 1909, McLaurin died suddenly at his home in Brandon from a fatal heart attack while he was in a rocking chair in front of the fireplace in his library. He fell forward without speaking a word, and was dead before members of his family reached his side. McLaurin died on December 22, 1909, no doubt making a sad Christmas for his family. Less than a month later, former governor and Confederate veteran Robert Lowry joined McLaurin in death. 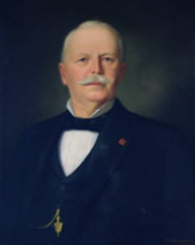 A native of South Carolina, Lowry (1831-1910) moved to Mississippi and eventually settled in Brandon, where he engaged in the mercantile business. During the Civil War, he served as colonel of the famed Sixth Mississippi Infantry and was later promoted to brigadier general. After the war, he was elected to the Mississippi Senate, where he served for one year, and was later elected as governor, serving two terms between 1882 and 1890. Lowry (right) was also very active in the United Confederate Veterans and was the state commander for seven years. The father of eleven children, he somehow found time to co-author A History of Mississippi from the Discovery of the Great River by Hernando de Soto with W.H. McCardle in 1891. He died at 9:30 p.m. on Wednesday, January 19, 1910, at his granddaughter’s house on State Street in Jackson. At his request, his family declined the offer to have his body lie in state in the new State Capitol building. Lowry’s funeral service was held on January 21. A special car was added to the regular passenger train from Jackson to Brandon to transport the body and the many dignitaries attending the burial. In Governor Edmond F. Noel’s official notice to the Mississippi Legislature, he wrote that "The angel of death, last night called from life to eternity, one of Mississippi's noblest and most patriotic citizens, ex-Governor Robert Lowry; A soldier without fear, a statesman without guile, and a gentleman above reproach has answered his last roll call. As Governor for eight years he gave to our State an efficient and honorable administration of public affairs. As an officer of the Confederacy and as commander of the Mississippi division of the United Confederate Veterans, he was true and tried, faithful to every duty and trusted and beloved by all with whom he was associated" 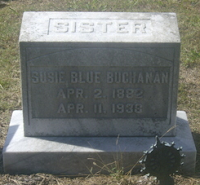 Among the numerous other persons of note interred in the old Brandon Cemetery are Thomas S. Shaw, the town’s first postmaster and surveyor of the town plat; two veterans of the Revolutionary War; Mrs. Frank Johnson (1831-1896), for whom Johnson Hall at the former Brandon Female College was named; and Susie Blue Buchanan. Buchanan (1882-1938) was the first female lawyer in Rankin County and the first female to practice before the Mississippi Supreme Court. In recognition of her pioneering achievements in law, the Women in Profession Committee of the Mississippi Bar Association annually presents the “Susie Blue Buchanan Award” to recognize and celebrate the practice of law in Mississippi. Buchanan's grave is seen here (above).