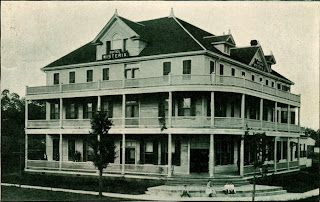 Winona, like many towns in Mississippi, was established and grew because of the railroad. To service passengers on the railroad, of course, hotels proliferated in such communities. In Winona, one of larger hotels targeted to railroad patrons was the Wisteria Hotel, built in 1910. During the hotel’s heyday in the 1920s and 1930s, the Wisteria, along with the Winona Hotel, located across the street, was a bustling place. The hotel was owned by W.B. and Delia Van Kirk, designed by Reuben Harrison (R.H.) Hunt, a well-known architect from Chattanooga, Tennessee. The Wisteria Hotel is a bit unusual as it is a wood frame building; based on a very cursory look at other buildings designed by Hunt, it seems that most others were of brick or stone construction. 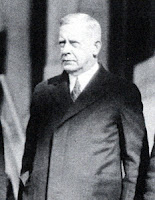 R.H. Hunt was born in Georgia, but moved to Chattanooga at age twenty to study architecture at night and work with an architectural and building contractor’s firm during the day. After employment with several architectural firms, Hunt (right) formed his own company in 1900. The result was the R.H. Hunt & Company, which was headquartered in Chattanooga but had satellite offices in Jackson and Dallas. R.H. Hunt is recognized as one of the most important architects in Chattanooga and in the south, and he designed quite a number of prominent buildings in Mississippi, especially on college campuses and several prominent churches. In Winona, he designed the Moore Memorial Methodist Episcopal Church (now United Methodist), the cornerstone of which was laid on Christmas Day in 1898. [For much more information on R.H. Hunt, please visit the Preservation in Mississippi blog at http://misspreservation.com/].

For both the Wisteria Hotel and Moore Memorial (right) in Winona, the contracting firm was R. Jesty & Company. Jonathan Frederick Jesty, as it turns out, was an interesting character. Born in Bere-Regis in Dorset, England, he immigrated to the United States in the early post-Civil War years and married a New Yorker named Rhoda. They moved south to Mississippi, first to Vaiden (in 1875) and then to Winona in 1878. In Winona, Frederick established a successful business as a contractor, and owned a lumber company and a brick yard in Winona, as well as a brick yard in Greenwood. In addition to the church and hotel, Jesty was the builder for the Holmes County Courthouse in Lexington, the Leflore County Courthouse in Greenwood, and the Clarksdale Theater, among others. 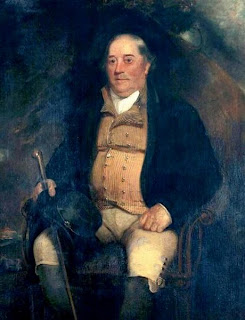 Frederick Jesty's success in the building trade was not by chance, as he came from good "stock" back in England, so to speak. One of his relatives a couple of generations before him was Benjamin Jesty (left), born in 1736.  Also from Dorset, Benjamin was a farmer but is better known for conducting early experiments with vaccinations against smallpox. As a farmer, he was aware that some people who had been infected with cowpox seemed to be immune to smallpox. When an epidemic of smallpox hit the area in 1774, Jesty decided to intentionally infect his wife Elizabeth and his two eldest sons with cowpox, and “injected” the cowpox with a darning needle. While his sons had only a mild reaction, his wife’s arm became very inflamed and for a while it seemed she might not survive the “treatment.” However, she eventually recovered. Although his experiment was met with hostility by many at the time (some of his neighbors feared that humans so infected might be transmuted into “horned beasts,” and there’s no telling what his wife must have said when he first proposed the idea), Benjamin Jesty’s contribution to the use of vaccinations was eventually recognized by the medical minds of the day, although he never wished to take much credit for the idea. Jesty died in 1816, and his gravesite is now considered a historic site in England due to his contribution toward developing a smallpox vaccination.

Frederick Jesty's father was also successful in his chosen profession. Frederick was the second son of Charles Jesty (1800-1897), known as "Old Charles", who was a surveyor and road and rail contractor in Dorset before he retired to the farm. “Old Charles” was engaged in the development of a portion of Dorchester-Yeovil railway line, which included the construction of a half-mile tunnel (right) at Holywell. The line (sometimes known as the “Slow & Dirty”) is still in operation. What prompted Frederick Jesty to come to the United States in the 1870s is unknown, but it apparently did not please “Old Charles,” as Frederick was disinherited from Charles’ will in 1895 for ‘failing to stay in touch with the family in Dorset’ (maybe a nice letter or two would have preserved his inheritance.) Despite being disinherited, Frederick did just fine on his own in the United States, perhaps using the skills he learned from his father.

Not only was Frederick Jesty successful in the building trade, he also achieved “prominent citizen” status in Winona, where he was known as “Colonel.” Frederick Jesty died on April 8, 1912, just two years after his company built the Wisteria Hotel. His obituary gives some hint concerning the degree of affection his fellow citizens had for him:

He was prominently connected with many enterprises of our city, and was always working for the best interests and upbuilding of our city. In personality he was a magnet drawing both old and young to him. Always smiling and jovial, big-hearted and kind, he was dearly loved by all our citizens, both men and boys. He was a member of the Masons and Elks Lodges. Funeral services were conducted from the family residence on Summit Street at eleven o'clock Tuesday morning, the Masonic Lodge being in charge. He was laid to rest in the silent city on the hill, there to slumber unhindered by the cares of this world, until the light shall burst in splendor upon the seven hills, and the trumpet of the Lord shall sound and time shall be no more. Then he will come forth and be joined with his family and many friends never again to be parted.

Although he was lauded at death, his gravestone (above) in Oakwood Cemetery in Winona, where he is buried next to his wife (who died in 1916), seems to have been forgotten.  His true monument, however, is in the buildings he helped create with R. H. Hunt.