The "Forlorn Hope" at Vicksburg 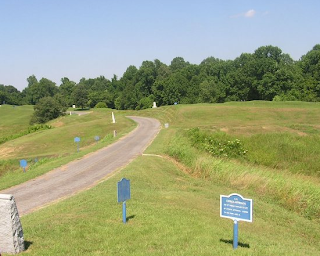 May 22 marks the 149th anniversary of Ulysses S. Grant’s second assault against the Confederate defenses at Vicksburg. Unlike the failed May 19 assault, which included only a portion of Grant’s army, the May 22nd assault was across the entire front. The hope, from Grant’s point of view, was that Union forces would sweep into Vicksburg and end the campaign with the capture of the city and its defenders.

Just three days earlier, on May 19, 1863, William T. Sherman’s XV Corps assaulted the northern end of the Confederate line. The Confederate defenses at Vicksburg consisted of a series of earthen forts protected by ditches and rifle pits, all laid out under the direction of Confederate engineers.  Each fort included several cannon and infantry support, with additional infantry in the rifle pits nearby. The Confederates had also placed felled trees and other obstacles in the ravines, making it difficult for any Union infantry to assault the positions. And so it happened on May 19: most of Sherman's soldiers could go no further than the ravines and only one unit was able to reach the main defensive line, where they were forced back with heavy losses.

Grant decided to try again on May 22, this time with his entire army. At dawn, the Federals unleashed a terrific artillery bombardment against the Confederates, including shells from Union gunboats in the Mississippi River. At 10:00 a.m., Union attackers across a three mile front moved forward. Sherman’s men again attacked in the northern section of the line, while the XVII Corps and XIII Corps advanced in the center and in the southern sectors respectively.

On Sherman’s front, one of the forts facing the Union attackers was known as Stockade Redan. This Confederate fort guarded one of the entrances into Vicksburg along the aptly named Graveyard Road (named for the city cemetery). Defending Stockade Redan were men from the 36th Mississippi Infantry, commanded by Col. William Wallace Witherspoon (right).* In front of the fort, a ditch approximately eight feet wide and six feet deep made any infantry assault almost impossible. To try and take the position, volunteers were recruited to rush ahead of the main attack force “armed” with wooden planks and ladders to throw a bridge across the ditch in front of the fort, all directly in the face of Confederate fire. 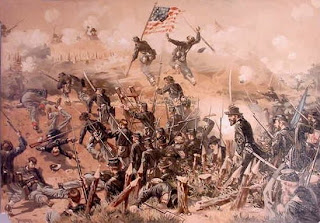 Known as the “Forlorn Hope,” the 150 volunteers had nearly a quarter-mile of open ground to cross. Emerging from the road cut in front of the fort, the men were battered by heavy fire from the Mississippians. Some of the “Forlorn Hope” managed to scramble up the steep slope of Stockade Redan. Most, however, had to take shelter in the ditch and try to hang on until nightfall, unable to bridge the ditch as planned. To try and dislodge the Federals, the Confederates lobbed lighted shells into the ditch and continued to pour rifle fire into the road cut, where the men of Francis P. Blair's division advanced in a massed column on a narrow front. While some of these troops were able to get within a few yards of the fort, Sherman was unable to achieve a breakthrough in the Graveyard Road sector, and losses were heavy. According to Sgt. George Powell Clarke of the 36th Mississippi, the Federals "fell like grass before the reaper." Later in the afternoon, encouraged by reports of a captured fort on the southern end of the line (which turned out to be short-lived), Sherman ordered more attacks. These too were repulsed with heavy losses. 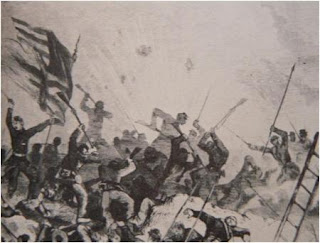 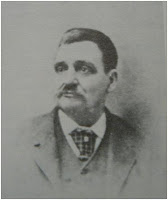 Under the cover of darkness, many survivors were able to withdraw to their lines. Many more lay between the lines, unable to be assisted by their comrades. The death toll was frightful. Among the “Forlorn Hope,” fifty three of the men who went in were either killed or wounded. One of those men was Pvt. Howell Trogden, born in Randolph County, North Carolina. By the time of the Civil War, Trogden had moved to Missouri, where he joined the 8th Missouri Infantry (U.S.) in 1861. Trogden was with his regiment throughout the Vicksburg campaign. When volunteers were called for on May 22nd, Howell Trogden stepped up, not knowing what task lay before him. Once he understood the mission of the "Forlorn Hope," Trogden (right) volunteered for even more dangerous duty - he would carry the flag for the impromptu force. At the signal to advance, Trogden and the rest of the men "swept forward and were met by a terrific fire from the enemy so deadly that our little band was almost annihilated," wrote Trogden. "At this moment I ran forward waving the flag and rushed on toward the fort. A canister struck the staff a few inches above my hand and cut it half in two. Then they depressed their guns and a cannon ball struck the folds and carried it half away, knocking it out of my hands." In the wartime illustration above, Trogden is the soldier on the left with the flag. 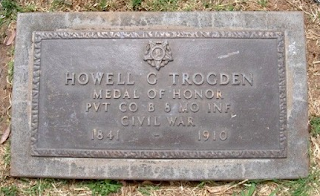 Against all odds, Pvt. Trogden managed to plant the flag on the forward slope of the fort where it remained until nightfall, at which time Trogden carried the bullet-riddled flag to safety. Howell Trogdon was honorably discharged exactly one year later. In 1894, Trogden, along with seventy seven other men of the "Forlorn Hope," were awarded the Congressional Medal of Honor for their heroism at Vicksburg. Trogdon died in 1910 and is buried in the Calvary Cemetery in Los Angeles. His grave marker, noting his Civil War service and Medal of Honor, is pictured above.

Despite the heroism displayed by the "Forlorn Hope" and the rest of Sherman's men, the attack failed, just as it did on McPherson's and McClernand's fronts. As night fell on the wounded and the dying, Grant settled down to a siege. For the 36th Mississippi, just one of the Confederate regiments who bravely fought and repelled the Union assault, the defense of Stockade Redan was key to holding fortress Vicksburg on May 22nd, 1863. Throughout the remainder of the siege, the 36th, along with other units in Hebert's brigade "held unflinchingly one of the most exposed portions of the defenses of Vicksburg." Although no Medal of Honor awaited these men, their actions were no less brave. Indeed, there were plenty of heroes on that day.