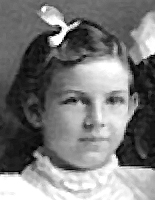 Ruth Cleveland, born in 1891, was the first child of U.S. President Grover Cleveland and his wife (the First Lady) Frances Cleveland. Ruth (left) was born between President Cleveland’s two non-consecutive terms in office and her birth caused a national sensation. Ruth Cleveland, naturally, became a darling of the press when Cleveland (below) returned to the White House in 1893. That same year, Ruth welcomed a baby sister to the family. Esther Cleveland subsequently became the only child of a president born in the White House. Unfortunately, Ruth Cleveland was a sickly child, and she died of diphtheria at age twelve in 1904. Although President Cleveland had left office by that time, “Baby” Ruth’s death touched many Americans and obviously affected the former president. Grover Cleveland’s health began to decline and he died four years later in 1908. 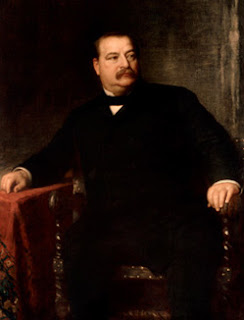 In 1921, the Curtiss Candy Company in Chicago introduced the “Baby Ruth” candy bar, seventeen years after Ruth Cleveland’s death. The Curtiss Candy Company was founded in 1916 by Otto Schnering. Considering that a German name might not be the best choice for a company in 1916, he used his mother’s maiden name instead. One of the Curtiss Company’s early products was a candy bar named the Kandy Kake, a chocolate-covered nut bar. In 1920, caramel was added to the candy bar, the shape was changed, and it was renamed – you guessed it -- the “Baby Ruth” bar. The Baby Ruth helped make the Curtiss Company one of the largest candy companies in the world. At one time, the company shipped six train car loads of Baby Ruths out each day. In 1923, the company launched another successful product, the "Butterfinger." 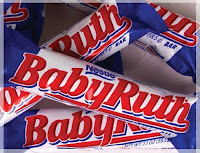 As for the name “Baby Ruth,” it’s perhaps a nice idea to name a candy bar after a President’s daughter, although it’s a bit unusual (and some might say morbid) to name a candy bar after a deceased child, particularly one who died seventeen years earlier. Because the story doesn’t quite ring true, many people speculate that the candy bar was actually named for Babe Ruth, who in 1921 – the year the “Baby Ruth” bar first hit the market – was at the height of his baseball career. In fact, Babe Ruth hit 59 home runs and 179 RBIs for the New York Yankees in 1921. 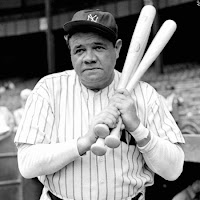 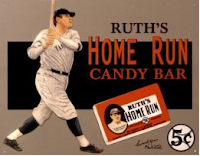 In 1926, a rival candy company introduced “Ruth’s Home Run Bar,” endorsed by Babe Ruth himself (see below, right). The Curtiss Company claimed that the product sounded too much like the “Baby Ruth,” and the U.S. Patent Office agreed, forcing the other company to take their candy bar off the market. In the process, the Curtiss Company contended that the lettering for their product came from a medallion used at the 1893 World’s Fair in Chicago which featured an image of the First Family and “Baby” Ruth. Such a medallion did exist, but it does not explain why they would choose the name seventeen years after she died and twelve years after Grover Cleveland’s death. The company also claimed at one time that the real Baby Ruth had once visited the company. The fact that she died long before the company was founded didn’t seem to matter much. As unbelievable as these claims are, this remains the official story about the naming of the Baby Ruth (the company is now owned by Nestle'). 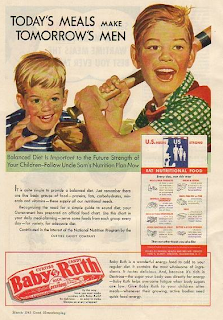 So, why didn’t the company simply acknowledge that the candy bar was named for America’s most famous baseball player? Most likely, it is because they wanted to avoid paying Babe Ruth royalties. Interestingly, despite denials by the Curtiss Company that the Baby Ruth bar had any connection to baseball and Babe Ruth, advertising campaigns for the candy bar has long been involved with baseball. For example, Schnering installed an illuminated sign just outside of Wrigley Field following Babe Ruth’s famous “called shot” in the 1932 World Series. The large “Baby Ruth” sign just happened to be over the same part of the field where Ruth’s home run ball had gone. The ad remained there for approximately forty years. In more recent times, the candy bar’s connection to Babe Ruth has been more direct. In 1995, Babe Ruth’s image was purchased from his estate for an ad campaign and during the 2006–2008 baseball seasons, the Baby Ruth was marketed as the official candy bar of Major League Baseball.

Regardless of whether the story about Ruth Cleveland has any merit, the Baby Ruth remains one of the most popular candy bars in the world. One must wonder, however, if the 'Butterfinger" bar is also secretly named for a baseball player, and if so, who?