Although it’s still awfully hot in Mississippi, fall is just around the corner and that means one thing: football. With high school teams already playing, college football will be kicking off soon. In Starkville, the Bulldogs are hoping to continue their recent success on the field, while the talk in Oxford will no doubt center on a new coach and hopes for a better year. Somewhere along the way, though, there will also likely be talk once again about mascots, and one mascot in particular: Colonel Reb. Although no longer officially part of Ole Miss, the Colonel, love him or hate him, has been a fixture at the University for a long time. Here is his story. 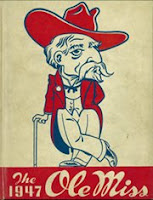 Colonel Rebel, as cartoon figure, dates back to the 1930s. Appearing first in the school's yearbook, the new Colonel fit well with the new nickname adopted for the University's athletic teams. First known variously as the 'Red and Blue' (patterned after Harvard and Yale) or simply 'Ole Miss,' the Mississippi teams were known as the Mississippi Flood beginning in 1929-30, an obvious nod to the great Mississippi Flood of 1927. Although the rather uninspiring name appears similar in origin to the Alabama Crimson Tide and the Tulane Green Wave, neither of the other two are actually related to the flood. While the Flood was chosen by a contest, the name never really caught on and many continued to use the 'Red and Blue.' In 1936, however, there was a renewed effort to find a permanent name for the Ole Miss teams. In the resulting contest, a committee of sportswriters selected 'Rebels,' which had been submitted by Ben Guider, an attorney from Vicksburg, among others. Even with this vote of confidence, a university committee narrowly chose 'Rebels' over four other finalists: Confederates,  Stonewalls, Raiders and simply Ole Miss. With the name set, Colonel Rebel was set to make his appearance in print.

Incredibly, the cartoon image of the colonel, which made his debut in 1937, may be based on an African American gentleman named Jim Ivy.* As a young man, Ivy was blinded while working with creosote on a bridge in north Mississippi. To try and make a living, "Blind" Jim Ivy began selling peanuts and other snacks on campus. Known as a fervent supporter of the university's athletic clubs (he was fond of saying he had never seen an Ole Miss team lose), Ivy was adopted as a sort of live mascot by succeeding classes of Ole Miss freshmen, who referred to him as the "dean of freshmen." When "Blind Jim" died in 1955, students and faculty raised more than a thousand dollars to establish a scholarship for black students, but not, of course, at Ole Miss. While there is no question that Ole Miss students were exceedingly fond of Jim Ivy, it was also in a decidedly paternalistic fashion. Regardless, there is some evidence that he was the model of Colonel Rebel. Certainly, the similarity is striking. 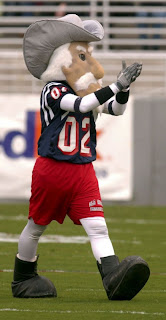 Beginning in 1940, the name "Colonel Reb" was bestowed upon the most popular male student. Prior to 1940, the honoree had been called "The Mardi Gras King" (the female version - "Miss Ole Miss" - had been around for nearly ten years. In addition, a student was selected each year to appear during football games in a Confederate uniform to lead the cheers (very similar to 'General Nat' at Southern Miss). He remained a fixture at Ole Miss games until the late 1970s. It was not until 1979 that the foam-headed mascot that has been the focus of so much attention in recent years made his debut. The much-loved and/or much-maligned mascot (depending on your particular allegiances) was part of a national trend toward such fan-friendly mascots, led by sports icon the San Diego Chicken (born in 1974) and commercial characters like the Kool Aid Man. The live student remained on the field in various forms until the 1990s, although by that time he had long since lost his Confederate uniform.

In recent years, as most are well aware, Col. Rebel has been replaced on the sidelines by "Rebel the Bear," and the cartoon image has been retired. Even so, the old Colonel remains popular with many fans, and makes unofficial visits in the Grove to tailgate with the faithful. The effort to replace Colonel Rebel has also generated a great deal of dissent among many fans who wish to see him returned to the sidelines. Whether or not that happens is anyone's guess. However, there is no question that Colonel Rebel, in all his various forms, has been a part of Ole Miss for 75 years.


* Although the idea that Col. Rebel could be patterned after Blind Jim Ivy is almost beyond reason, the possibility that it is true, at least, is supported by Dr. David G. Sansing's The University of Mississippi: A Sesquicentennial History (1999).