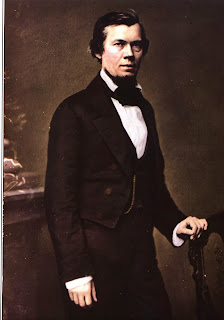 Born in Leasburg, North Carolina in 1810, Jacob Thompson graduated from the University of North Carolina in 1831. Admitted to the bar in 1834, he practiced law in Pontotoc and Oxford, Mississippi.  In Oxford, Thompson met and married Catherine Jones, the daughter of a wealthy planter. Married in 1838, the couple had one child, Macon Caswell Thompson, born the next year. In addition to a success in his law practice and as a cotton planter, Jacob Thompson was involved in state politics and was elected to Congress in 1839, where he served six terms in the House of Representatives as chairman of the Committee on Public Lands and later as chairman of the Committee on Indian Affairs. In 1857, President James Buchanan appointed him Secretary of the Interior. 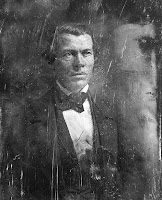 Thompson did well as Secretary of the Interior, reorganizing the department and emphasizing efficiency. In Washington, he and Kate, as she was known, were frequent guests at the White House and the Thompson residence became a part of the social scene. Jacob Thompson remained in the cabinet until his resignation in January, 1861, when Mississippi seceded from the Union. When he resigned, the New York Daily Tribune, owned by Horace Greeley, labelled him a traitor. The image seen here was taken while Thompson was Secretary of the Interior.

During the Civil War, Thompson offered his services and his personal fortune to the Confederate cause, and served as an aide in several campaigns, mostly in Mississippi. In late 1863, he came back to Oxford and was sent to the Mississippi Legislature. The next spring, President Jefferson Davis asked Thompson to go to Canada as a secret agent and Confederate representative to the Canadian government, and he accepted. 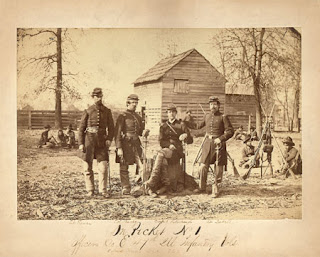 Meanwhile, back home, Kate suffered from the Federal occupations of Oxford in 1862 and 1864. In December, 1862, U.S. Grant's forces entered the town during the Mississippi Central RR Campaign. Among the troops occupying Oxford were men from the 47th Illinois (left), seen in this photo taken in Oxford. While in Oxford, Grant personally searched Thompson's abandoned home at the urging of Edwin M. Stanton, who considered Thompson to be one of the leading secessionists (or, in his view, traitors) in the South. What Grant found and then sent to Stanton were Thompson's pre-war letters, some of which were later published in Northern newspapers as a sort of expose'. In the 1864 occupation, during A.J. "Whiskey" Smith's expedition, the house was singled out and burned, even though Catherine and her daughter-in-law were still at the house. Sally Thompson, the wife of Macon, who was now in the Confederate army, had just given birth and still confined to the bed. Ejected from the house and put out into the yard, Catherine and Sally watched helplessly as the house went up in flames. Luckily, someone remembered that the baby was still in the house and made a dramatic rescue before the house was completely consumed. The Thompson home was by no means the only house or building burned in Oxford that hot August, but is perhaps the only one destroyed with such vigor by Federal officers.

By the time Thompson's house was in ruins, Jacob himself had been in Canada for three months. In Canada, his mission was officially to try and arrange for a peace with the United States through contacts with wealthy men in the North. Failing that, he was there to try and disrupt Union operations by whatever means he could arrange. Among other things, Thompson attempted to rescue Confederate prisoners housed at Johnson's Island, Ohio, by commandeering a vessel on Lake Erie. His daring attempt ultimately failed, but created a lot of press and a lot of attention from Canadian officials, who weren't too keen about saboteurs in their midst. By association, perhaps, Thompson was then linked to all sorts of plots originating from Canada by Confederate sympathizers or agents to burn this or that Northern city (including New York, where among other things there was an attempt to set fire to P.T. Barnum's museum). Among the raids across the border was the St. Albans, Vermont raid, pictured above, which took place on October 19, 1864. Even though Thompson didn't authorize the raid, he got "credit" for it in the Northern press, so when Abraham Lincoln was assassinated, Thompson was almost naturally implicated in the plot and became a wanted man. Although he was ultimately cleared of any part in the conspiracy, he and Catherine (who made a daring journey through Union lines to join her husband in Canada) fled to Europe, narrowly escaping their pursuers. While in England, they were received by the Prince of Wales (the future King Edward VII) and Queen Victoria.

By 1869, both Thompsons were finally able to return to Oxford. Finding the home in ruins, Jacob decided to move to Memphis to began a new life. His son Macon remained in Oxford, however, where he lived in a house built for him by his father in 1869 on the site of the original family home (the house still stands). Luckily for Thompson, he still retained a great deal of wealth, having invested in European stocks. Despite a few more run-ins with the Federal government (including charges of embezzlement from his time as Secretary of the Interior), Thompson lived out the remainder of his life in Memphis and served on the boards at Sewanee and the University of Mississippi, both of which benefitted from his generous financial support. 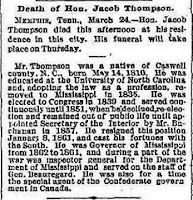 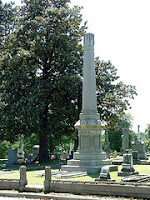 Jacob Thompson died in 1885 at age 75 and was buried in Elmwood Cemetery in Memphis. At his funeral, he was remembered as a "brilliant statesman" and a "friend to all classes." Still harboring resentment toward him, many in the North were not so kind to his memory, however, and Northern newspaper editors protested vehemently when the U.S. Department of the Interior closed it's offices and lowered the flag to half-mast (the usual honor for a former Secretary), as they still considered him a traitor. However, their protests had absolutely no hope of convincing the U.S. Secretary of the Interior at the time, as just twenty days earlier, on March 6, fellow Mississippian, Oxfordian and friend L.Q.C. Lamar became the Secretary under Grover Cleveland.