John Crowe Ransom, a noted poet, critic, educator and editor, was born in 1888 in Pulaski, Tennessee. He received an undergraduate degree from Vanderbilt University in 1909, and was a Rhodes Scholar at Christ Church, Oxford, from 1910-1913. In 1914, he joined the faculty at Vanderbilt, where he taught English until 1937. During the First World War, he served with the Fifth Field Artillery and as an instructor of artillery in France. While at Vanderbilt University, Ransom became a central figure in a group of agrarian poets, including Robert Penn Warren, known as “The Fugitives.” Wary of social and cultural changes in the South, this group published, among other works, The Fugitive (1922-1925), a periodical in which many of Ransom’s best poems appeared. After 1927, Ransom concentrated on critical writing. Ten years later, he accepted a position as professor of poetry at Kenyon College in Gambier, Ohio, and in 1939 became editor of the Kenyon Review. He died in 1974, and is buried on campus at Kenyon College.

Ransom’s connection to Mississippi predates his graduation from Vanderbilt University. Following the fall semester of his second year at Vanderbilt, Ransom decided to seek employment as a teacher in order to earn the $800 needed to complete his college education. With the approval of his father, who was a Methodist minister, Ransom applied at a number of prominent preparatory schools, including McTyeire Institute in Tennessee, which was a prep school associated with Vanderbilt. Despite having superb academic qualifications and the endorsement of several well-known educators and clergy, Ransom, who was then only seventeen years old, had difficulty getting a job teaching. In May, 1905, however, he unexpectedly received an offer from the Taylorsville High School to teach the sixth and seventh grades for a salary of $40 per month. After requesting and receiving an increase in pay to $65 per month, Ransom accepted the position. The photo above, of a very young Ransom, was taken in 1903. 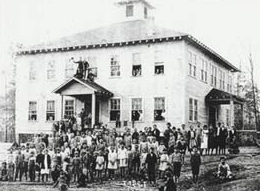 Arriving in August, 1905, he found life in Taylorsville crude “even for a young man who had grown up in the small towns of middle Tennessee.” However, the town did have a new two-story school (left), built in 1902, and Ransom found great hospitality among his students and among the townspeople. As a teacher, Ransom’s subject areas included English, mathematics, health, geography, science, spelling and history. Despite his youth, he was known as a “strict disciplinarian and a demanding teacher.” He was also involved in the life of the community. Along with fellow teacher A.A. Mooney, Ransom became active in the local Methodist Church, and both participated in local social events.

In March, 1906, Ransom was asked to continue for another year at Taylorsville, with a pay raise of $5 per month. However, in consultation with his father, Ransom declined the offer, hoping to secure another teaching position closer to his home in Tennessee. By May, 1906, Ransom accepted a position as a Latin and Greek teacher at the Haynes-McLean School in Lewisburg, Tennessee. He reentered Vanderbilt University in 1907, and the rest, as they say, is history.