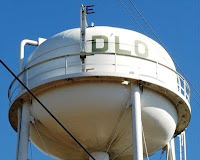 There is a small town in Simpson County with a curious name, a name no doubt discussed many times by visitors to Mississippi. The town is D’Lo, home to perhaps 400 folks, and there are several interesting stories about the origin of the name. One that has floated around for years (although somewhat in jest, no doubt) is that it stands for “de low place in the road” or that the name was given because the area tended to flood because it was “too damn low.” Then there’s a story about a mix-up when the village applied for a name for their post office, and someone misread the proposed name as “D’Lo” when it should have been something else. The most likely origin, however, based on research done by the University of Southern Mississippi, comes from a French map of the area marked with “De l’eau sans potable” at the confluence of the Strong River and Sellers’ Creek, which means “bad drinking water.” The Strong River, as an aside, comes from a translation of a Choctaw name for the river meaning “bitter creek,” and does not refer to the strength of the river’s current. Regardless, the curiously named D’Lo is today just another small town. At one time, though, D’Lo was the centerpiece of a thriving intracontinental business with links to both Iowa and California. 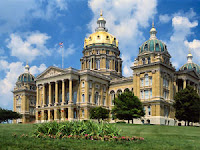 In 1915, D’Lo was chosen as the site for a new sawmill by the Finkbine-Guild  Lumber Company. The Finkbine-Guild Lumber Company was established by two wealthy entrepreneurs from Iowa, William O. and Edward C. Finkbine.  Both brothers were active in supporting the development of Des Moines and Iowa. William Finkbine, in particular, was generous in his support of the University of Iowa, his alma mater. In 1925, the university opened its first golf course on land donated by Mr. Finkbine and named it for him (the image here shows the university president about to take swing during the dedication). In addition, the university still awards a medallion recognizing “learning, leadership and loyalty” during the annual Finkbine Dinner, started in 1917 by none other than W.O. Finkbine.  W.O. and E.C. Finkbine’s father was Robert Spencer Finkbine, a building contractor who supervised the construction of the state capitol building at Des Moines (above left), which was built over a fifteen year period at a cost of $2,873,294.59. At the end of the project, Finkbine, as head of the state building commission, reported that only $3.77 was unaccounted for. The Iowa State Capitol, constructed from 1871-1886, is the only five-domed state capitol in the country. 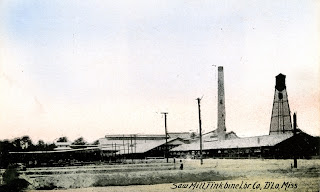 The new all-electric, state-of-the-art sawmill at D'Lo (left) went into operation in 1916 with a cutting capacity of 200,000 board feet every ten hours, far better than an earlier mill established at Wiggins. Wood for the mill came from all over central Mississippi in Simpson, Smith, Rankin and Scott counties, and the company established rail lines and logging camps throughout the area to handle the work load (in Rankin County, for example, the company established a logging town named Finkbine several miles south of Johns). To handle the influx of mill workers in D’Lo, the company built homes for their employees and opened a mill store known as the Kew Mercantile Company, handling everything from groceries to hardware and seed. During this period, D’Lo exploded in population, expanding to about 5,000 at its peak. At one time, the town had a movie theater, ten grocery stores, a furniture store, ten gas stations, seven butcher markets, five cafes, three pharmacies, a three-story hospital, two YMCA buildings, lighted basketball courts, professional basketball and baseball teams, and a newspaper called The D’Lo Herald. For a time, D'Lo was the second largest mill town in the country. 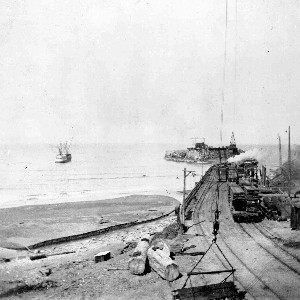 In time, of course, the land simply couldn’t continue to produce the amount of timber needed to sustain the operation. In order to keep the mill operation running, the Finkbines decided to retool the plant as a finishing mill, using California redwoods as the timber supply. To accomplisj this, they purchased a lumber company in Rockport, California, in 1925, located near the Pacific Ocean. As in D’Lo, the company also built all the support facilities necessary for the operation, including housing, stores, a hospital, hotel and school, as well as an extensive network of rail lines and a massive loading dock (right) near Sausalito, California, along with a fleet of ships to carry redwood logs to Mississippi. To get there, the ships, known as the 'Redwood Line,' had to pass through the Panama Canal and then go up to Gulfport, where the redwood logs were loaded onto rail cars and transported to D’Lo, where they were processed. With such a complicated route from harvest area to finishing, things were bound to get snarled up, and within two years the Finkbine-Guild Lumber company was finished. The company simply couldn’t compete with local redwood lumber companies unencumbered with the extra expense of transporting logs to Mississippi. In 1928, the California operations were sold to another company and the D’Lo mill ground to a halt because there were simply no more trees. 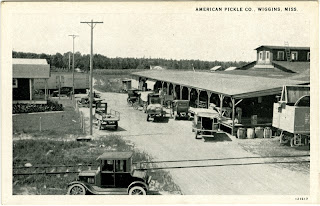 With the supply of timber exhausted, the Finkbines sold their lumber mills to another company in 1929. However, they still hoped to make money from their extensive land holdings, and they  organized the Mississippi Farms Company, which advertised mainly to northern immigrants the availability of cheap land for crop production. The clear-cut timberland, however, was too hard to work and the company never went anywhere. However, out of that failed venture came the American Pickle and Canning Company in Wiggins (left), which processed pickles, tomatoes, beans, fruits, and sweet potatoes. By the 1960s, the operation, by then owned by the Brown Miller Company, was the largest pickle plant in the world. 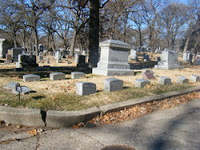 As for D'Lo, the town with the funny name, life as a boom town ended as suddenly as it began. Today, little remains of the once bustling city created by the Finkbine brothers deep in the piney woods of Mississippi. As for the Finkbine brothers themselves, William, the great benefactor of the University of Iowa, died in 1930, soon after the Mississippi experiment collapsed. Edward died in 1945, however, living to the ripe old age of 90. Both brothers, along with their families, are buried in Des Moines, Iowa.