With the Olympic games winding down, I thought it might be interesting to highlight a famous Olympic medalist who later made a name for himself in film, namely Johnny Weissmuller. Weissmuller, born in 1904, was a native Hungarian who won five gold medals and one bronze as an American swimmer. He also won fifty-two national championships in swimming and set sixty-seven world records. He is best known for his role as Tarzan, however.  After finishing his swimming career, Weissmuller became the sixth actor to portray Edgar Rice Burrough’s character, and made twelve films as Tarzan. He is still considered the quintessential ‘Tarzan’ today, including his famous jungle yell. 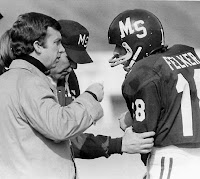 Dozens of other actors have also portrayed Tarzan, including one with a Mississippi connection. In 1981, Miles O’Keeffe got his first real acting role opposite Bo Derek in Tarzan, the Ape Man. O’Keeffe, born in 1954, is originally from Ripley, Tennessee. In high school, O’Keeffe was a football star and attended the Air Force Academy, where he was a running back on the Academy’s freshmen team in 1972. The next year, however, he left the Academy and enrolled at Mississippi State University, where he was offered a scholarship as a tight end/offensive lineman. The 1973 Bulldogs welcomed a new coach to Starkville. In Coach Bob Tyler’s first season (at left, from 1974), Mississippi State managed to knock off both Florida and Florida State, but had two ties (one with USM) and ended with a disappointing  4-5-2 record, capped off with a 38-10 loss to Ole Miss in Jackson in the annual Egg Bowl game. O’Keeffe was injured during the season and decided to transfer to Sewanee, where he had a successful football career and earned a degree in psychology. 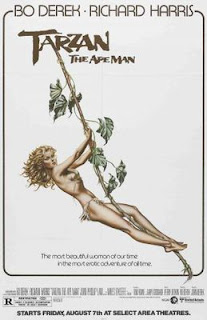 After graduating from Sewanee, O’Keeffe became a prison counselor for the Tennessee correctional system. After a couple of years, however, he moved to California to play for a semi-pro rugby team.  He also worked as a stunt man and had a few bit parts in Hollywood, but his big break came after he sent his photo in to the producers of Tarzan. Released in 1981, Tarzan, the Ape Man was directed by John Derek, Bo Derek’s husband. The film had plenty of alluring shots with Bo Derek in various stages of undress, but O’Keefe’s character (i.e., Tarzan) doesn’t appear until half-way through. Tarzan's image wasn’t even on the movie poster – instead it featured Bo Derek swinging on a vine – and Miles O’Keeffe’s name did not appear on it either. Clearly, the film was a jungle version of Derek’s successful movie “10” (1979), also directed by her husband. Not surprisingly, the film earned poor reviews by critics (one reviewer called it “offensive, idiotic, and amateurish”) and was “awarded” six ‘Razzie’ nominations in 1982, including the award for worst actress to Bo Derek.

Despite the negative reviews of the film, Miles O’Keeffe has continued in the movie business.  After appearing  in S.A.S. San Salvador and Sword of the Valiant, both in 1982, O'Keeffe went to Europe, where he starred in a series of science fiction/fantasy films as Ator, the first of which was Ator, the Fighting Eagle (1983). He played several other roles in Italy before returning to the U.S.  All totaled, O'Keeffe has appeared in more that thirty-five films to date, the most recent being Clawed: The Legend of Sasquatch (2005) and King of the Road (2010). As of 2007, he was living in New York City. O’Keeffe may never earn a place on the podium at the Oscars, but he is also the only person who can claim the title of “Tarzan: King of Starkville.”