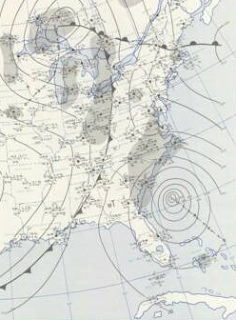 As Hurricane Sandy bears down on the east coast, those in the Gulf states know exactly what folks along the Atlantic are facing. The size and strength of this storm appears similar to many hurricanes which have ravaged our region in the past, most recently Hurricane Katrina. This storm is unusual, however, due to the lateness of the season. A late October hurricane is not unprecedented, however, and in 1954, another monster storm ripped into the Carolinas and up the Atlantic seaboard, causing mayhem as far as Canada. Her name was Hurricane Hazel.

Hazel was the fourth powerful hurricane in 1954. On October 5, the storm appeared off the island of Grenada and gained strength as it crossed the Atlantic Ocean. A week later, on October 12, Hazel slammed into Haiti, completely demolishing several towns and killing perhaps as many as 1,000 people. With winds clocked at 140 miles per hour, the storm also did major damage to the island’s coffee crop. Next in line was Puerto Rico, where another eight deaths occurred. Three days after hitting Haiti, Hurricane Hazel, a Category 4 storm, came ashore in the U.S. at Myrtle Beach. 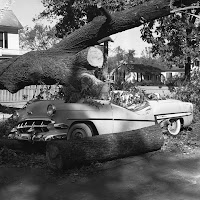 After making landfall in South Carolina, Hurricane Hazel churned north up the coastline into North Carolina and Virginia, still packing winds of more than 100 miles per hour. The all-too familiar storm surge was 18 feet. Coastal towns suffered tremendously, especially in North Carolina. A total of nineteen people were killed in the Tarheel State and 15,000 homes were completely destroyed, with many more thousands damaged. After moving north out of North Carolina, the storm dropped huge amounts of rain and still packed strong winds throughout Virginia, Maryland, Delaware, New Jersey, Pennsylvania and New York.  In New York City, winds were recorded at 113 mph at Battery Park, the highest ever recorded in the city. Other areas farther away from the coastline suffered from heavy rains. In West Virginia, for example, Hazel produced more than nine inches of rainfall. 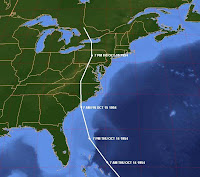 After wreaking havoc in the United States, Hazel headed into Canada. Although somewhat weakened, she, like Hurricane Sandy, combined with a winter storm before dumping huge amounts of rain onto an already rain-soaked Toronto. The deluge produced massive flooding, sweeping away some fifty bridges and severely damaging Toronto’s road network. More importantly, eighty-one Canadians lost their lives in the flood waters and left 4,000 homeless, still the worst natural disaster in Canadian history. In the immediate aftermath of Hurricane Hazel, President Eisenhower declared a disaster and moved to provide Federal assistance, including mobilization of the National Guard in some areas to prevent looting. Recovery began immediately, and many coastal communities had rebuilt sufficiently by the coming summer months to welcome tourists. The destruction wrought by Hazel hastened, in some instances (Myrtle Beach is one example) the construction of modern resorts in what were previously quiet beach communities, a phenomena repeated in many Gulf Coast communities like Gulf Shores, Alabama. Damage estimates from Hurricane Hazel reached $281 million in the United States alone and the wind and water killed approximately 1,200 people in Haiti, Puerto Rico, the Bahamas, the United States and Canada. Due to her ferocity, Hazel was one of the first storms to have her name retired from the list of named hurricanes.

It is perhaps of little comfort to those in the path of Hurricane Sandy to know that similar events have occurred in the past. However, it is always good to reflect on the fact that the people of this nation have time and again come together after such disasters and rebuilt their communities.