Born in Lexington, Mississippi, Jonathan Brooks graduated from Tougaloo College and was a dedicated Baptist minister. Although he worked in a variety of jobs, he had the heart and voice of poet. His only published work, a collection of his poems, was published after his death. Virtually unknown today, one of Brooks’ poems memorialized an American hero, one whose death occurred on one of World War II’s most important battlefields.

Jonathan Henderson Brooks was born in 1904, * the eldest child of sharecroppers. His mother, from an early age, instilled in him a love for books and regularly read to him, particularly from the Bible. In his teens, Brooks left Mississippi to attend high school in Missouri and it was during these years he developed a passion for poetry. Returning to Mississippi, Brooks graduated from Tougaloo in 1929. While at Tougaloo, he composed the school’s alma mater song, known as the “Eagle Queen.” Since 1929 was not an especially good year to seek employment (with the great stock market crash), Brooks was fortunate to find work as an assistant to the Rev. William T. Holmes, who served as president from 1913 to 1933 and who ushered Tougaloo College into the modern era as a liberal arts college. Holmes Hall (above), built in 1926, was named in his honor. Rev. Holmes also influenced Brooks to become an ordained minister and he was called on frequently to deliver sermons and commencement addresses.

After his years at Tougaloo, Jonathan Brooks moved to Corinth, Mississippi, where his wife Josie taught at the Scales Street School, a local school for black students. Built in 1929, the Scales Street School was located near the Corinth National Cemetery. Brooks, meanwhile, despite his educational background, worked as a porter at the Waldron Hotel. In 1940, his annual salary at the hotel was $440. During World War II, Brooks landed a job at the Corinth Post Office (top right), where he was employed at the time of his death in July 1945. He was just forty years old. His grave (lower right) is in Corinth’s Forest Hill Cemetery. As an aside, another Mississippi author, a certain William Faulkner, also worked in a post office. From 1921 to 1924, Faulkner was the postmaster at the University of Mississippi, where he spent much of his time tossing mail in the trash, reading magazines and playing cards (when not playing golf). When a postal inspector showed up, Faulkner resigned from what he considered a miserable job and reportedly wrote the following resignation letter: “As long as I live under the capitalistic system, I expect to have my life influenced by the demands of moneyed people. But I will be damned if I propose to be at the beck and call of every itinerant scoundrel who has two cents to invest in a postage stamp. This, sir, is my resignation.” Despite Faulkner’s brief and disastrous stint as a postmaster, the U.S. Postal Service awarded him with a commemorative stamp in 1987. 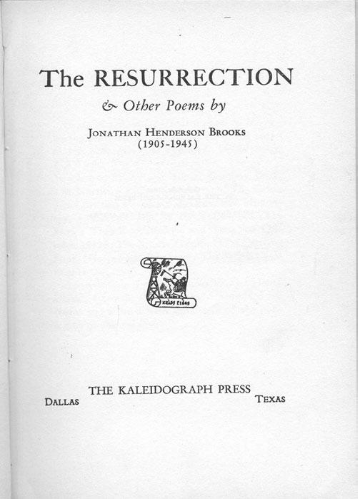 Three years after Jonathan Brooks’ death in 1945, a book of his poems was published in a small volume entitled The Resurrection and Other Poems. The book, composed largely of poems with religious imagery, was published by another Mississippi poet named Henry Dalton, who was white. Dalton, who was born near Rienzi, attended college at Union University in Jackson, Tennessee, as well as the University of Alabama and the University of Virginia. In 1939, he also began working at the Corinth Post Office, where he retired in 1969. Thus, Henry Dalton’s association with Brooks was both as a co-worker and a fellow poet. The Resurrection and Other Poems received high praise from one of America’s greatest African American writers and a contemporary of Brooks, Langston Hughes. Of Brooks, Hughes wrote that had he lived, he “would have been one of our major poets.” Hodding Carter, a fellow Mississippian, also praised Brooks’ poetry. Brooks, he wrote, “sings with a gentle mysticism and poignant imagery of an unbounded world, a world of faith that can ‘measure great Gibraltar by a butterfly.’” Today, the little book is a rare find. At the time of this writing, a copy of the 55-page volume was available from a book dealer for $1,250. 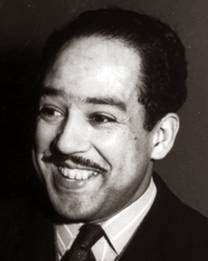 Among the poems contained in the collection of Brooks’ work was a poem entitled “She Said.”  The poem, about a mother who receives the tragic news that her son has been killed in battle, was cited by Langston Hughes (right) as “the most beautiful poem I know that came out of World War II in the English language.” Brooks wrote the poem about a real soldier, a fellow Mississippian named James Arthur Long. Long was born in 1923 and lived in Corinth when the war began. During World War II, Corporal Long served with the 4090th Quartermaster Service Company and on June 6, 1944, was part of the Allied landing at Normandy, where he was mortally wounded. Long died on June 10. Brooks’ poem is as follows

She said, "Not only music; brave men marching
Under the stripes and stars and sun's shining:
War is sudden news. Your son was killed
The tenth of June in France. Letter follows.

"Oh, he was bold to hasten peace," she said.
"And he was brave. And he desired tomorrow.
He was too young to be compelled from sunlight,
And moonlight; from the light of stars forever."

She would ask questions, morbid on her mind:
The fatal bullet found him; did he scream?
Lie on the beach and call unhurrying death?
Lord, was he waiting long? How long he fought
In France, four days or one? Who saw him fall?
Cared that he fell in sunshine, lay in rain,
Or perished in the night? And what star cared
Above his battleground in Normandy?

"Now I know why Mary of Galilee,
One morning, rose and went into the Garden.
And I know why she tarried and was sad.
Mary, it is the same with me," she said.

Considering both Jonathan Brooks and Henry Dalton worked in the Corinth Post Office, it is entirely possible that the poem Brooks wrote was based on the actual letter informing Arthur Long’s mother of her son’s death and perhaps her real-life thoughts. His mother, Delia Long, died in 1981 at the age of 99. Corporal Arthur Long, who lost his life at age twenty one, now rests with thousands of other heroes in the American Cemetery (right) in Colleville-sur-Mer, France. This June 6 is the 70th anniversary of the D-Day Invasion, where so many brave men lost their lives on the beaches of France in the sacred cause of freedom. Like many thousands of soldiers, Brooks’ grave is marked by a simple white cross. Unlike most, however, Corporal Brooks also has a poem dedicated to his memory.