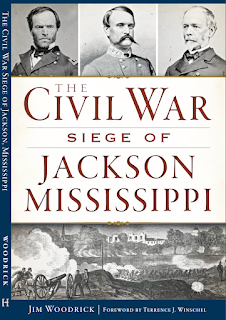 This blog has been inactive for some time, as I took on the challenge of writing a book. That book is now complete and was published in April 2016. It is titled "The Civil War Siege of Jackson Mississippi" and is published by The History Press. The book details the July 1863 Siege of Jackson, in which Union forces under the command of Major General William T. Sherman moved east to the capital city to confront Confederate General Joseph E. Johnston's "Army of Relief." After a week-long siege which included a desperate charge on July 12 by a lone Union brigade, resulting in more than 50% casualties, Johnston and his army slipped across the Pearl River and escaped to fight another day. Sherman moved into Jackson and began methodically destroying the railroads and other military targets in and around Jackson. In addition, Sherman's men burned and looted a sizable portion of the city, giving Jackson the unfortunate nickname of "Chimneyville."

The book is available via a number of online booksellers and at several local bookstores in the Jackson area. In addition, the book can be purchased at the Vicksburg National Military Park gift shop and through MDAH's "History Store."

Now that the writing bug has bitten me, I have several other projects I'm working on. As such, the blog will remain inactive for the time being. Please continue to enjoy the archived stories, however, and if I get a chance to return to the blog, I'll let you know.


Posted by Jim Woodrick at 9:19 AM No comments: