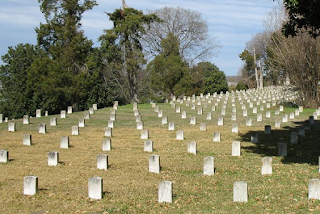 The Vicksburg National Cemetery, composed of nearly 120 acres, is the final resting place for 17,000 Civil War dead, all but two of them Union soldiers. Of these, approximately 75% of the dead are unknown; the graves of those nameless heroes marked by small white stones. In addition to the Union and Confederate dead, there are nearly 1,300 soldiers from other eras, from the Indian wars to the Korean Conflict, as well as a smattering of civilians, including park superintendents and their families. Although most of the stones represent tragic stories, one memorial in particular is heart-wrenching: the Trindle family monument. 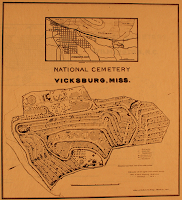 The Vicksburg National Cemetery was established in 1866, thirty-three years before the adjacent military park was established by Congress. Managed by the War Department, authorities went to great effort to locate and exhume the thousands of remains scattered across the battle-scarred landscape in Mississippi, Louisiana and Arkansas, many of the remains buried in river levees or in shallow graves on some lonesome battlefield. To collect these remains, the U.S. government paid private contractors to exhume bodies for reburial in the new cemetery at Vicksburg. As one might imagine, there was plenty of corruption in this plan and often horrid tales of desecration of the dead. Despite these terrible conditions, work proceeded, if an agonizingly slow pace, until the cemetery was filled. To supervise the work not only of the exhumation and reburial of the dead but of the ongoing construction work at the cemetery, the War Department appointed a superintendent. In 1868, the first full time superintendent was appointed to the Vicksburg National Cemetery. Alexander Henry arrived on September 9 and immediately began working with mortuary records, keeping track of employees and welcoming visitors to the site. There was plenty of work to be done, much of it related to drainage and the building of terraces in the cemetery, but that work was under the guidance of the Vicksburg Quartermaster. Even so, the superintendent was often blamed for problems in the cemetery. For example, a soldier who visited complained that hundreds of skeletons were lying around in the open awaiting burial. While the charge was accurate, it wasn’t the fault of the superintendent. Although it appears that Alexander Henry did the best he could under difficult circumstances (while keeping a large family together), he was suddenly dismissed in September 1874 and transferred to Baton Rouge, reportedly because he “was given to periods of excessive drink, and that at times he suffered in consequence from delirium tremens.” With Superintendent Henry’s departure, John Trindle was appointed as the new superintendent at Vicksburg.

Himself a Union veteran, Trindle was considered an “intelligent, active, energetic man who gives his whole time heartily and faithfully” to his work. An Irish immigrant, he had served in Co. K, 56th Massachusetts Volunteer Infantry during the Civil War. The regiment was raised fairly late in the war and served in the Siege of Petersburg under the command of Colonel Stephen Minot Weld, Jr. (left) On Thursday, July 21, 1864, Weld wrote about the position held by the regiment in his diary. “We are now on the front line again, in a pretty fair position,” he wrote. “The men have to keep well under cover, however, in order to avoid the fire of the sharpshooters.” Apparently, one of the Confederate snipers found a ready target that day, as John Trindle was shot in the left leg and, as a result, had to have his leg amputated. Col. Weld, a Harvard graduate, would become a wealthy cotton merchant after the war and built a 52-acre estate named Rockweld in Dedham, Massachusetts. He is the first cousin (twice removed) of former Massachusetts governor William Weld and the great-grandfather of actress Tuesday Weld. 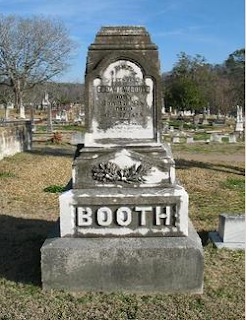 Just three years after coming to Vicksburg, Superitendent Trindle requested that he be transferred to another post, due to the unhealthy climate. “I have been stationed at different Cemeteries in this state and Florida during the last eight years,” he wrote his superiors, “and as a consequence the health standard of my family and myself has been greatly lowered, so much so that there is constantly some of us suffering from the climatic diseases which we have contracted during that time.” Furthermore, Superintendent Trindle claimed that “owing to my disability” the “frequent changes in temperature causes me severe pain in my stump which frequently lasts for days.” The request was transfer was not approved, however, and Trindle continued his work in Vicksburg. The very next year (1878), Trindle’s fears for the health of his family became a reality with tragic results. In the summer, a severe yellow fever epidemic erupted in the area and Trindle requested that the cemetery be closed, which was granted by the Quartermaster General. Trindle also requested a leave of absence to protect his family from the fever outbreak. Enclosed with his request was a statement of support from his physician, Dr. David W. Booth of Vicksburg. The letter to Montgomery Meigs was dated August 12. In just two weeks, Dr. Booth would himself die from the yellow fever epidemic while taking care of others stricken with the disease. He was 37 years old. Booth's memorial (above) is located in Vicksburg's Cedar Hill Cemetery. Trindle’s leave was granted, beginning November 1. By then, however, it was too late. Although his family’s health seem to improve somewhat in September, disaster struck when both of the surviving children died (a daughter, Eola, age one year, had died in mid-August). On October 11, four-year-old Willie fell victim to the disease, and two weeks later Charlotte, age three, also died, leaving the Trindles without any children. A fourth child had died in 1875. All were buried in the Vicksburg National Cemetery. Despite his personal tragedy, Superintendent Trindle, by then sufficiently recovered from sickness, continued to work at Vicksburg and did not take the leave granted.

During John Trindle’s administration, the cemetery saw a number of improvements in drainage, appearance and in the construction of several utility buildings within the cemetery. On April 12, 1880, Trindle received a distinguished guest at the cemetery: President Ulysses S. Grant (left), who visited Vicksburg and the scene of his wartime victory, rode out to the cemetery, where he was enthusiastically greeted by a crowd of three thousand well-wishers. After complimenting Trindle on the appearance of the cemetery, Grant registered as a visitor and rode back into town. The next day, the Vicksburg paper wrote that the “reception of General Grant in this city was, we are glad to state, entirely free from partisan manipulation.” Two years earlier, there was a much less genial reception for another visitor to the cemetery. In May, 1878, a “young desperado” named Charles Latcher “indecently exposed” himself in front of several hundred visitors to the cemetery. When a cemetery watchman ordered him to stop, Latcher punched him in the face and then assaulted another cemetery employee with a knife. He was finally apprehended after emitting “much vile and abusive language,” and Trindle recommended that the authorities make an example of him “as it would have a good effect on the class to which he belongs.” 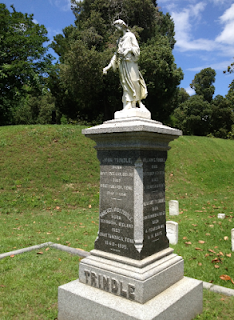 In 1881, Trindle received orders to transfer to the cemetery at Antietam in Maryland. Although he had earlier wished to leave Vicksburg, Trindle now requested that he remain. Again writing to Meigs, Trindle said that since the loss of their children “I find it difficult for myself and almost impossible for my wife to sever my connection with the Cemetery.” The request was granted, and Trindle remained at Vicksburg until March, 1882, when he transferred to the national cemetery at Chattanooga. There, on February 13, 1914, he died of arteriosclerosis at age 73. His wife Charlotte lived until age 96, dying in 1935. Both are buried in the Vicksburg National Cemetery, reunited in death with their children. Today, the Trindle family monument (right), topped by an angel, is surrounded by the 17,000 veterans who John Trindle was charged to keep secure. It is a fitting memorial to his dedication and sacrifice.