Lenny Skutnik: Hero of the Potomac 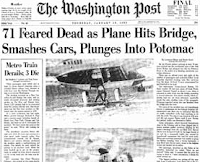 For those who enjoy trivia, here's a question: what do Civil Rights pioneer Rosa Parks, British Prime Minister Tony Blair, NBA star Dikembe Mutombo, Afghan President Hamid Karzai, MLB player Sammy Sosa and Mississippi native Lenny Skutnik all have in common? The answer is found in the story of a American hero with an unlikely name.

In the early 1980s, Martin Leonard "Lenny" Skutnik, born in Mississippi in 1953, was employed as a low-level government worker in the print shop of the Congressional Budget Office. Prior to that, he had held a variety of jobs, working as a painter, fast food cook and at various times as an employee in a meat packing plant, furniture factory and supermarket. In short, there was nothing remarkable or extraordinary about Lenny Skutnik. Likely, his name would not be known today, except that on January 13, 1982, something extraordinary happened. On that day, you see, Lenny Skutnik became an American hero. On that cold January day, Air Florida Flight 90 crashed into the Potomac River in Washington, D.C. Somewhat reminiscent of the recent airline crash in San Francisco, the airplane clipped the 14th Street Bridge on takeoff and dropped into the ice-choked river, killing 74 passengers on board and four people on the bridge. Observing the rescue operations from the shore of the river, Lenny Skutnik, who was just a by-stander, watched as Priscilla Tirado struggled to grab hold of a lifeline dropped to her from a rescue helicopter. As her hands slipped from the lifeline, she started to sink into the frozen river. Seeing the disaster unfold before him, Skutnik tore off his boots and coat and dove into the snowbound Potomac River. 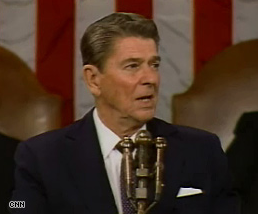 After being dragged to the shore, Priscilla Tirado, though nearly frozen from the icy waters, was taken to the hospital and miraculously survived. As a result, Skutnik was rightfully hailed as a hero. Although he had no training as a "first responder," he didn’t need it. He simply saw someone in need and acted without hesitation, the proverbial “Good Samaritan.” Of course, many “ordinary” people do heroic things. Many times, they are never known or recognized by others (and many times that's by choice). Lenny Skutnik probably would have preferred it that way, too, but his heroic rescue was caught on camera that day, and he became an instant household name because of it. Less than two weeks later, Skutnik was invited to attend the State of the Union Address, where he and his wife sat in the President’s box next to First Lady Nancy Reagan. During the forty minute speech, which was President Reagan's first State of the Union address, Reagan made Skutnik’s act of heroism a centerpiece of his message to the American people:

Just just two weeks ago, in the midst of a terrible tragedy on the Potomac, we saw again the spirit of American heroism at its finest, the heroism of dedicated rescue workers saving crash victims from icy waters. And we saw the heroism of one of our young Government employees, Lenny Skutnik, who, when he saw a woman lose her grip on the helicopter line, dived into the water and dragged her to safety. And then there are countless quiet, everyday heroes of American life, parents who sacrifice long and hard so their children will know a better life than they've known; church and civic volunteers who help to feed, clothe, nurse and teach the needy; millions who've made our nation, and our nation's destiny, so very special, unsung heroes who may not have realized their own dreams themselves but then who reinvest those dreams in their children. Don't let anyone tell that America's best days are behind her, that the American spirit has been vanquished. We've seen it triumph too often in our lives to stop believing in it now. 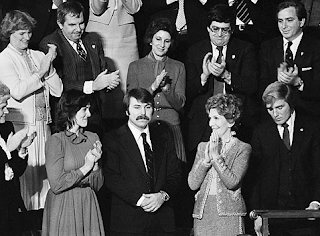 Of course, Skutnik received a rousing ovation from all those present, and the accolades didn’t stop there. In the coming weeks and months, Skutnik was honored with awards from the U.S. Coast Guard and by the Carnegie Hero Fund, among others, and received thousands of letters (many delivered without an address other than to the “Hero of the Potomac”) and honors poured in from such diverse organizations as the Japan Volunteer Fireman’s Association and the Polish American Police Associations of Philadelphia and New York. He also earned a trip home to Mississippi aboard Governor William Winter’s plane, where “Lenny Skutnik Day" was celebrated on February 10. The day before, his mother’s hometown of Columbia, Mississippi, declared their own “Lenny Skutnik Day.” He even received an anonymous check for $7,000 from someone in Virginia and an offer from a Washington car dealership for use of a car for a year. None of these honors, however, was ever as distinct and memorable as being recognized by President Reagan during the State of the Union Address. Now, of course, it is a regular occurrence to recognize notable persons (though not necessarily heroes) during the annual speech before Congress. Among the most recent honorees was Brian Murphy, a police officer from Wisconsin who was shot twelve times while responding to a shooting at a Sikh temple. During previous speeches, Rosa Parks, Tony Blair, Dikembe Mutombo, Hamid Karzai and Sammy Sosa have all been recognized in similar fashion, but Martin Leonard Skutnik was the first. Ever since, the Washington press corps refers to all such honored guests at the State of the Union as “Lenny Skutniks.” 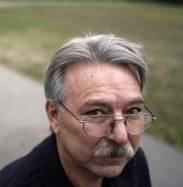 Today, Skutnik is retired from the Congressional Budget Office after more than thirty years and leads a quiet, “ordinary" life with his wife. He's  reportedly still a bit embarrassed about all the fuss. "I wasn't a hero," he has said, "I was just someone who helped another human being. We're surrounded by heroes. What made this different was that it was caught on film and went all over the world." He is still grateful for the recognition by President Reagan, however, and proudly displays a photo of the momentous occasion in his home. Though his fame has faded over time, the “Hero of the Potomac” – and especially his name - will never be completely forgotten.