The Church with the Golden Hand 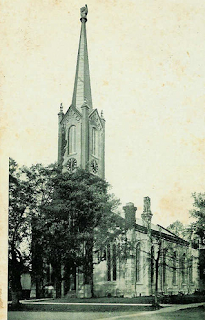 Among the most recognizable and historic churches in Mississippi is the First Presbyterian Church of Port Gibson. Known for its unique steeple, adorned not with a cross but with a golden hand pointing toward heaven, the church is among several houses of worship located on Port Gibson's beautiful, tree-shaded "main street," officially designated as Highway 61 but still known by most, appropriately, as Church Street. Completed in 1860, First Presbyterian Church was likely constructed by a local builder James Jones, who worked on a similar church building in New Orleans. The interior of the Romanesque Revival church is simply elegant, and includes, among other things, three chandeliers from the Robert E. Lee, which was involved in the most famous riverboat race in history against the Natchez in 1870. For more than 150 years, the congregation has lovingly taken care of their beloved church, including the most famous finger in Mississippi. The story of how the golden hand wound up on the church's steeple (whether or not it is merely legend) is tied to the congregation's first pastor. And, as it turns out, he has an interesting family history.

The congregation that became First Presbyterian began in 1807 and was first called Bayou Pierre Presbyterian Church. Located several miles west of present-day Port Gibson, the original church building was far from the elegant edifice on Church Street. In fact, it was a crude log building perched on a bluff overlooking Bayou Pierre, built in response to the work of three missionaries sent to the Mississippi territory by the Carolina Synod to establish preaching stations. By the 1820s, the congregation had grown sufficiently to move to the new community of Port Gibson and built a larger church, which stood until 1860. A reconstructed log church (left) is now located at Point Lookout. The site of the original congregation at Bayou Pierre was the scene of fighting during the battle of Port Gibson on May 1, 1863. During the engagement, the right flank of Brig. Gen. Edward Tracy's brigade of Alabamians was anchored at Lookout Point, as it is now known. Soon after 8:00 in the morning, as his brigade began to trade fire with the advancing Federals, Gen. Tracy was killed in action. According to Sgt. Francis Obenchain of the Botetout Artillery (the only Virginia unit in the Vicksburg Campaign), "a ball struck him on the back of the neck passing through. He fell with great force on his face and in falling cried 'O Lord!'" Tracy (left) died instantly. His body was carried into town and left at the home of Judge Lemuel Baldwin after the Confederates retreated and then buried in the town’s cemetery. In May 1, 1866, on the third anniversary of the battle, Edward Tracy's coffin was disinterred and taken back to the Baldwin house, where the Presbyterian minister, a Rev. Price, performed religious services. After the service was completed, Tracy’s body was taken to the steamboat landing for the long trip back to Macon, Georgia, where he rests today.

The first regular pastor of Port Gibson's Presbyterian Church was Dr. Zebulon Butler. A native of Pennsylvania, Rev. Butler attended theological school at Princeton, after which he went as a missionary to southwestern Mississippi. Arriving in Vicksburg, he received a "cordial reception" and began organizing a prayer meeting and Sunday School. After a year in Vicksburg, he became pastor of the little church at Bayou Pierre. Upon arrival, he began "gathering the few professing believers together" and visiting house to house, where "he pressed the truth upon the attention of an unevangelized population." Some of the "unevangelized" no doubt included members of the Methodist faith, which had been established in the area by the pioneering circuit riders Tobias Gibson and Lorenzo Dow some two decades earlier. In addition to his evangelical zeal, Butler was also an advocate of the Colonization movement, which aimed to slowly dismantle slavery by relocating blacks to Africa, a position also espoused by the prominent Methodist clergyman William Winans, who, like Zebulon Butler, was a Pennsylvania native. Zebulon Butler remained in Port Gibson for the rest of his life and tended to his flock for thirty four years. He died in 1860 and is buried in Port Gibson's historic Wintergreen Cemetery.

Born in 1803, Zebulon Butler came from a prominent family. His grandfather, also named Zebulon Butler, was born in Ipswich, Massachusetts in 1731. A soldier and a Colonial leader, he fought in the French and Indian Wars and then led a group of settlers into the Wyoming Valley, an area claimed by both Pennsylvania and Connecticut. Butler was a Connecticut Yankee in the intermittent fighting which occurred throughout the valley among settlers from the two colonies who made claims to the same land (in addition to the various tribes who still lived in the valley). The skirmishing over the land claims, sometimes referred to as the Pennamite Wars, would not be resolved until long after the American Revolution, when the area was finally granted to Pennsylvania. During the Revolution, Zebulon Butler represented the Wyoming Valley in the Connecticut Assembly and served as a colonel in the Connecticut Line. In 1778, he was defeated in battle by a Loyalist force under the command of John Butler (apparently no relation). The Loyalist force included men from the Iroquois and Delaware and some British regulars. After the battle went against Butler, his men retreated to a fortified position at Forty Fort. What followed is still described as the “Wyoming Valley massacre,” depicted in the painting above. According to the account, the Indians executed and then scalped many of the prisoners and by dawn the "carcasses floated down river, infesting the banks of the Susquehanna." Zebulon Butler escaped, however, and returned to his home in Wilkes-Barre, where he died in 1795. 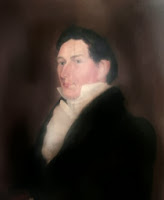 Among Col. Zebulon Butler's sons was Lord Butler. Although born with an exceedingly patrician name, 'Lord' was his mother's maiden name and would be used several times in the family tree. Lord Butler served in numerous offices in Wilkes-Barre and the region (by then a part of Pennsylvania), including county treasurer, state senator, postmaster and clerk of courts. He was also appointed as a brigadier general in the Pennsylvania militia and, as such, is known as "Gen." Lord Butler. In a history of Luzerne County (Pa.) published in 1893, he was described as "tall — more than six feet — straight as an arrow, his countenance manly, with bold Roman features, his manners grave and dignified." He was apparently quite strict and humorless, as no one dared approach him "with a joke or a slap on the shoulder." Although he was praised for his republican ideals and noble character, he was "decided in his political opinions, and free in expressing them" and would "neither shake hands with nor smile" when meeting anyone with whom he disagreed, even when running for office. It is little wonder, then, that his son Zebulon would choose to go to the wilderness of Mississippi to spread the Gospel and, perhaps, to escape his father's overbearing personality.

As already noted, Rev. Butler's time in Port Gibson was fruitful, as he remained pastor for thirty four years. In addition to his work with the Colonization Society, he was also actively involved in the dissemination of religious tracts and literature, becoming an agent for the American Tract Society and the Calvinistic Magazine. Admired as a pastor, at least one family chose to name their son after him. Zebulon Butler Gatlin (left), born in 1832 in Pike County, served in Co. H, 39th Mississippi Infantry. Along with the rest of his regiment, he was captured during the siege of Port Hudson and served time in prison. Out of six Gatlin brothers who served in the army, three died in the Civil War. Zebulon Butler Gatlin died in 1893. Ironically, although named for a Presbyterian minister, he joined the Methodist Church and even had a son who became a Methodist preacher. 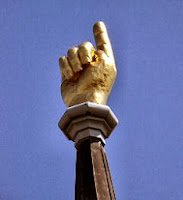 Rev. Zebulon Butler in his day was known as a great preacher “who depicted the fiery furnaces of hell in terms scorching enough to make the most hardened sinner quiver.” During his sermons, he often raised his fist with a “quivering index finger jabbing toward Heaven.” In the years just prior to the Civil War, he urged his congregation to build a new church and it was almost complete when he died on December 23, 1860. The first service held in the new church, ironically, was his own funeral. Wishing to find a suitable memorial for their beloved preacher, the members of the congregation decided to erect a hand pointing toward heaven on top of the steeple to mimic his oft-seen gesture in the pulpit. According to other accounts, the hand was first carved in 1859, prior to his death. Either way, it is likely in recognition of Rev. Butler’s influence and dedication to his congregation. The first hand was carved from wood and covered with gold leaf. Eventually, time (and perhaps woodpeckers) took care of that one and it was replaced about 1900 with the current 11-foot tall metal hand. Today, the church with the golden hand is recognizable the world over, a fitting tribute to a pastor who served his congregation well for more than three decades.