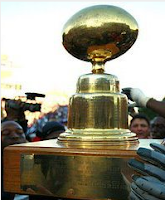 "Thanksgiving" means different things for different people. For many, the holiday conjures images of bounteous feasts and gatherings with family and friends. For others, it’s an opportunity to serve those who may not have enough food, clothing or shelter. For many Mississippians, though, it also means that it’s time for football. Specifically, it’s time for the annual gridiron grudge match between Mississippi State and Ole Miss. We call it the “Egg Bowl.” What’s at stake in the annual battle for the golden egg are bragging rights for a whole year. Fifty years ago, though, the Egg Bowl didn’t exactly produce a winner...or a loser, for that matter. 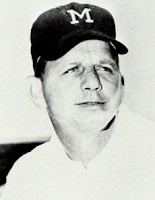 The 1963 edition of the Egg Bowl was played at Scott Field in Starkville on Saturday, November 30. The weather was cold and blustery, with wind gusts in excess of thirty miles per hour. Coming into the game, both teams had good records. Ole Miss was undefeated, and only a 0-0 tie in the first week against Memphis State to tarnish an otherwise stellar campaign. Once again, the Rebels had almost wrapped up the SEC championship and were heading to the Sugar Bowl, leading the conference in both offensive and defensive categories. Mississippi State had also had a good year, with just two losses (to Memphis State and Alabama) and one tie against Florida. For the Bulldogs, it was the first winning season in six years. Both teams were led by All-Americans at center and tackle and both teams had good coaches. Ole Miss, of course, was led by the legendary Coach John Vaught. Mississippi State’s coach in 1963 was Paul Davis, a native of Knoxville, Tennessee. Davis (left) played at Ole Miss and then coached at New Albany High School before heading to Jones County Junior College. From there, he coached at Memphis State and then at Mississippi State as an assistant under Coach Wade Walker. Davis took over the reins as head coach the previous year and only managed a 3-6 record in 1962.  Although Ole Miss was still considered the odds-on favorite for the 1963 Egg Bowl, the game promised to be a hard-fought contest, especially at Scott Field. On this occasion, however, many of the 35,000 fans assembled for the game were not entirely focused on football. Just six days earlier, President John F. Kennedy had been assassinated in Dallas, Texas.  By all accounts, the crowd was a bit subdued. It had certainly been an eventful week.

Once the teams kicked off, however, all eyes focused on the contest at hand. In the game, Ole Miss scored first, driving the ball eighty yards in eleven plays, scoring on a pass by Rebels quarterback Jim Weatherly. A native of Pontotoc, Weatherly (right) was an All-American football player but is best known today as a songwriter. Among other tunes, he composed “Midnight Train to Georgia,” made famous by Gladys Knight & the Pips. On this day, however, he was the man at the helm of the league-leading Ole Miss squad. Meanwhile, Mississippi State couldn’t get a first down in the opening period. In the second quarter, though, the Bulldogs got going and managed to score on a 49-yard field goal (a school record at the time) from kicker Justin Canale. Canale was from Memphis and was one of five brothers who played at either Mississippi State or Tennessee. After graduation, he played as a lineman in the AFL for both Boston and Cincinnati before joining the CFL’s Montreal Alouettes, where he was part of the 1970 Grey Cup championship team. With Canale’s successful field goal, Ole Miss held a slim 7-3 lead at halftime. 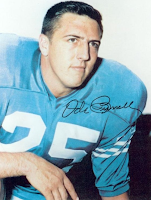 In the third quarter, the Rebels had a hard time moving the ball and at one point were backed up deep in their own territory. Facing a stiff wind, the punter managed only an 18 yard kick and the Bulldogs got the ball at the Rebel 32 yard line. From there, State went on to score their only touchdown of the day on a halfback pass by Ode Burrell, the only pass he ever threw in his college career and the only pass completed that day by State. Burrell (left), a native of Goodman, Mississippi, was a JUCO All-American at Holmes Junior College before heading to Mississippi State, and then went on to play for the AFL’s Houston Oilers, where he was named the AFL All-Star in 1965. The first time he touched the ball for Houston, Burrell returned a kickoff 93 yards for a touchdown. As big as that play was, however, it probably didn’t compare with the pass he threw in the Egg Bowl. With that touchdown, the Bulldogs – incredibly - were now in the lead, 10-7! Mississippi State’s narrow margin held for more than a quarter, but then Ole Miss began what looked to be the game-winning drive. Starting at their own 25 yard line, the Rebels moved methodically down the field, gaining 72 yards in twelve plays. With a little more 3:00 remaining, Ole Miss had the ball at the State three yard line. It was fourth and goal, and the game was on the line. Instead on going for the winning touchdown, however, Coach Vaught chose to send in the kicker, Billy Carl Irwin. Placed at the ten yard line, Irwin easily made the kick (although he had missed an extra point in the 1962 Egg Bowl), and the game was tied 10-10. With time left on the clock, Mississippi State had the opportunity to pull the upset of the year, but it was not to be. The Bulldogs just couldn’t move the ball and the game ended in a tie.

The 1963 Egg Bowl ended just where it began – tied. Throughout the long history of the game, there had been other ties, but this would be the last (and will likely be the last). In explaining why he went for the tie instead of an outright win, Coach Vaught (seen here in the 1963 Sugar Bowl) noted that Ole Miss was still “conference champions and undefeated.” Had the Rebels failed to at least tie Mississippi State, Auburn would have taken the conference title, so on paper it was a solid decision. For the Bulldogs, though, they could now rightfully claim that the Rebels hadn’t beaten them. As with most ties, neither side was entirely happy with the outcome, but neither was too upset either. Neither team lost, but then neither team won. Ole Miss, for its part, preserved its claim to an undefeated season and won the SEC title. Mississippi State earned the right to claim at least a partial victory in the Egg Bowl and got to a bowl game for the first time in twenty-three years and earned a #11 ranking in the polls (Ole Miss was a consensus #7). With a record of 6-2-2, Coach Davis was named the SEC Coach of the Year.

In the post-season bowls, Ole Miss went to New Orleans and played in the Sugar Bowl against Alabama. Played in four inches of snow, the Tide couldn’t score a touchdown but managed to beat Johnny Vaught’s team on the strength on four field goals, 12-7. Interestingly, the quarterback that day for Coach Bear Bryant was Steve Sloan, substituting for Joe Namath, who had been suspended. Sloan, of course, would later become head coach at Ole Miss. Mississippi State, meanwhile, earned a trip to “sunny” Philadelphia, Pennsylvania, and played North Carolina State in the Liberty Bowl on December 21. With temperatures as low as 15 degrees, only 8,309 fans (in a stadium which held 102,000) saw the game in person. Mississippi State won the game 16-12, capping off a 7-2-2 season. Due to the low attendance, the game moved to an indoor facility in Atlantic City in 1964, becoming the first bowl game played indoors. The next year, the Liberty Bowl moved to Memphis, where it remains today.