"A most unfortunate collision": The Sinking of the Steamboat Horizon 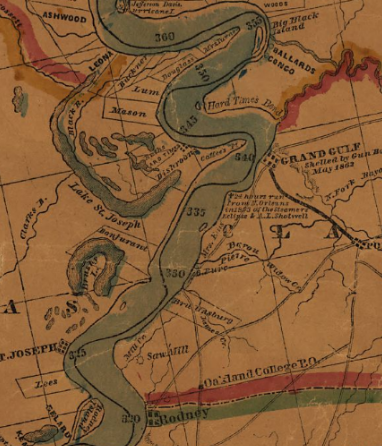 On the night of April 30-May 1, 1863, Union Major General Ulysses S. Grant began moving his army across the Mississippi River at a place called Bruinsburg, located between Rodney and Grand Gulf. Grant had been stymied in his effort thus far to cross the river onto Mississippi soil. The most recent effort to effect a landing had been at Grand Gulf. Unfortunately for the Union navy, there were Confederate batteries posted at Grand Gulf which could not be silenced by Admiral David Dixon Porter’s “city class” ironclads and Grant was forced to look further south for a suitable landing. He found one at Bruinsburg, where a black informant reported that there were good roads and no Confederates. Grant’s Army of the Tennessee began crossing in the early hours of April 30 and by that afternoon had more than 20,000 men ashore. 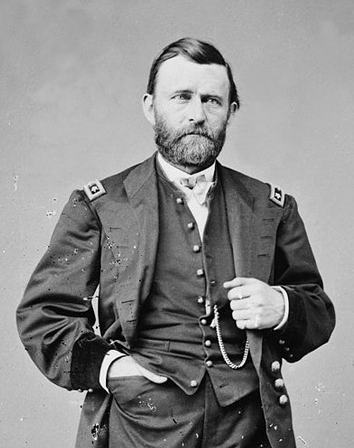 By May 7, with the addition of Sherman's XV Corps, Grant would have approximately 33,000 troops available for the final phase of the campaign to capture fortress Vicksburg. With the successful amphibious landing at Bruinsburg, Grant felt a great sense of relief. "I was now in the enemy's country," he wrote in his post-war memoirs, "with a vast river and the stronghold of Vicksburg between me and my base of supplies. But I was on dry ground on the same side of the River with the enemy. All of the campaigns, labors, hardships and exposures from the month of December previous to this time that had been made and endured, were for the accomplishment of this one object." The amphibious operation conducted by Porter and Grant, the largest by any American force until the November 1942 landings in North Africa during WWII, had been a complete success. Almost. 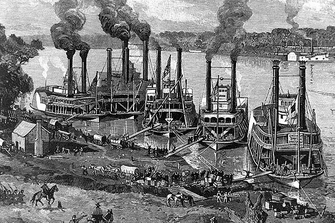 With any complicated military operation, some mix-up or accident is likely to occur. And so it was on May 1, 1863, when two steamboats, the Horizon and the Moderator, collided. Both were involved in ferrying troops and equipment to the shore and were running without lights on a moonless night to avoid detection. Originally named the John C. Fremont, the Horizon was built in 1854 for Capt. Jackman T. Stockdale of Georgetown, Pennsylvania, who owned a number of commercial steamboats. In 1861, the Horizon entered military service under contract with the Union army and was at Pittsburg Landing during the battle of Shiloh before moving to the Cumberland River to help with sick and wounded soldiers. On April 22, 1863, the Horizon, Moderator and four other steamboats were selected to run past Vicksburg's batteries. Just six days earlier, Admiral Porter’s river fleet managed the same feat with the loss of just one transport. Unlike the first attempt, however, none of the steamboats were armed and the boats’ crews were soldiers and not naval personnel (as this was an army operation). The result was decidedly less successful. This time, the Tigress was sunk by Confederate cannoneers, while the Empire City was completely disabled and the Moderator was badly damaged. Only the J.W. Cheesman, Anglo-Saxon and Horizon escaped without serious damage. Still, most of the steamboats made it below Vicksburg with much-needed supplies for Grant’s army and, more importantly, were available to help move the army across the river.

At about 3:00 a.m. on May 1, the Horizon was en route toward the east bank of the Mississippi when she collided with the Moderator. Like the Horizon, the Moderator had been built as a commercial steamboat but was now under contract to the Union army. After use on the Ohio River as a supply vessel in 1862, she was purchased by Capt. O.C. Williamson and participated in operations on the Mississippi. Both Williamson and Richard Calhoon, who was likely the pilot for the Horizon, were experienced pilots. However, the Moderator was still damaged from the action on April 22 and was very difficult to manage, especially without lights. On board the Horizon were the men, guns and horses of Battery G, 2nd Illinois Light Artillery, commanded by Captain Frederick Sparrestrom. Also known as Stolbrand's Battery, the unit included a number of men of Swedish origin. Although the Moderator was already a wounded vessel, it was the Horizon which sank in the collision. * As a result, virtually all of the battery's guns and equipment were lost, including all but thirteen horses and six mules. More importantly, two privates, Francis Linderbeck and Nicholas Carlson - both Swedish immigrants - drowned in the black, swirling waters of the Mississippi. Linderbeck, from Chicago, had enlisted with the unit in August, 1861. Carlson was a later recruit, joining the battery on New Year's Day in 1862. According to Samuel J. Churchill, who would be awarded a Medal of Honor for action at Nashville in 1864, the loss of life could have been much greater. "We had a very narrow escape from being drowned," he wrote. "We lost all our guns, nearly all of our horses (except what broke away and swam out); but all our battery was saved except two men, who were in the stern of the boat with the horses and could not get out." Churchill, seen here (above left) in a postwar photograph, died in 1932.

Another member of the battery, Sgt. Edward Webster, managed to save the captain’s horse (named “Sam”) and a couple of other horses and mules, but lamented that the men lost everything else. “Men had knapsacks with blankets & overcoats strapped to gun carriages & wagons so they saved only what they had on at the time,” he wrote. “I called roll from memory – an anxious roll call.” Sgt. Webster, a schoolteacher from Belvidere, Illinois, before the war, also reported that the survivors found themselves on a “low wet piece of ground, with a wide strong current between us and the levee.” Despite the danger, Webster bravely swam to shore to report the disaster to headquarters on the Louisiana side of the river. There, he managed to secure a wagon loaded with “chickens, pigs, beef, preserves, &c, &c.” to relieve the suffering of his men. The same day, firing could be heard from the opposite shore, signaling the battle of Port Gibson. The soldiers of Battery G remained stranded on the little island in the Mississippi River for another day before being rescued. Sgt. Edward Webster (right), a native of Ohio, was promoted to 1st Lieutenant in March 1864 before being transferred to the 4th U.S. Colored Heavy Artillery. He died in 1918 and is buried at Arlington Cemetery. 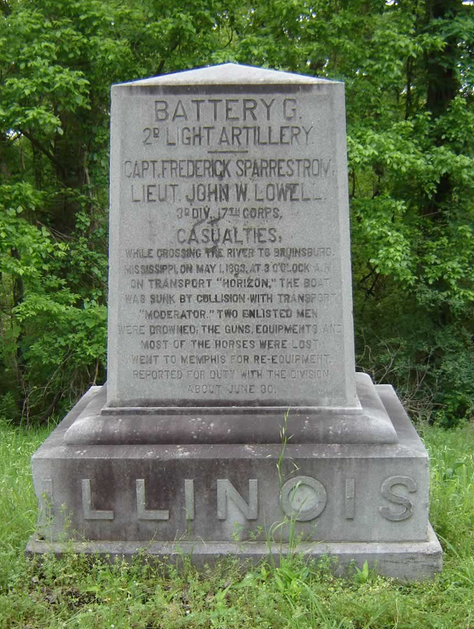 Aside from the loss of men and horses, the wreck messed up the timetable for the river crossing. Maj. Gen. James B. McPherson, commanding the XVII Corps, of which Battery G was a part, called the steamboat accident "a most unfortunate collision" which "delayed very materially the embarkation of the Second Brigade and the remainder of the artillery of the Third Division." Indeed, Logan's division was delayed in getting across the river because of the collision. For Battery G, the delay would be much longer: because all of their equipment, including knapsacks, tents and, of course, their guns and caissons had been lost, the men had to go all the way back to Memphis by a circuitous route to be refitted and given new equipment, a move which did not begin until May 13, when they departed from Milliken’s Bend aboard another steamboat. They would not return to Mississippi until a few days before the end of the Vicksburg siege. Despite not participating in the siege for more than a couple of days, there is a monument to the battery detailing the sinking of the Horizon and the loss of the two men. The monument is located just outside the Vicksburg National Military Park along the old Jackson Road east of the monument to Gen. John Logan. Captain Sparrestrom, meanwhile, was reassigned and served with another artillery battery from Illinois throughout the siege.

In late May, Lt. Commander Elias K. Owen, who would lead an amphibious expedition up the Yazoo River in February 1864, was given the task of recovering what he could from the wreck of the Horizon. According to Owen (right), Confederate guerrillas had already raided the vessel and had removed flour, saddles and other items. On May 27, Owen wrote from aboard the USS Louisville that he had only succeeded in recovering three gun carriages due to "the stench arising from 60 dead horses and men [which] made my officers and men sick." To attempt another recovery, Owen reported that the post commander at Grand a Gulf would "send some negroes down with me" to cut away the roof of the Horizon and allow the dead bodies to drift out and allow fresh water in, thus allowing divers to secure, if possible, the unit's artillery pieces. Interestingly, the divers used in the recovery operation were also black. On June 5, Owen reported that after the roof had been burned off, the boat had shifted and that he was "led to believe the guns slipped off the deck." After using probes, all that was found were the dead horses and caissons. The bodies of privates Linderbeck and Carlson were recovered, however, and buried in the vicinity. Presumably, the battery’s four 6-pound James Rifles were never located and the burial places of the two soldiers are unknown.

The sinking of the Horizon on May 1, 1863, is just a footnote in the much larger story of the Vicksburg Campaign, but it was certainly a significant event in the history of Battery G, 2nd Illinois Light Artillery. It was also a tragic day for the families of Nicholas Carlson and Francis Linderbeck, two young immigrants who lost their lives in the service of their adopted country.

* The Moderator was repaired and continued in service until January 1864 when she was lost in the iced-over waters of the Mississippi at St. Louis.The owners of the Horizon, meanwhile, sought payment from the U.S. government after the war for the loss of the steamboat but apparently never received any compensation.