Baptized in blood at Gettysburg 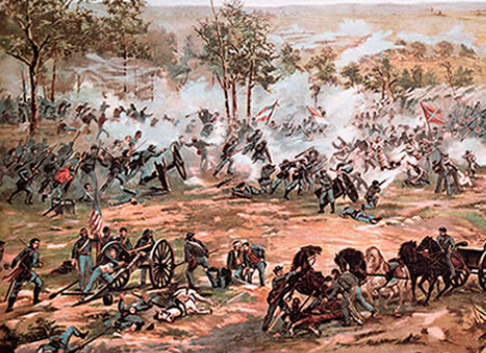 As the sun rose on the Pennsylvania town of Gettysburg on July 3, 1863, the morning light revealed scenes of almost indescribable horror across the field and farms. Thousands of bodies, killed in the fighting the previous two days, littered the ground, turning the otherwise pastoral landscape into a vision of hell. The day before, many of the dead were killed during Confederate Lt. Gen. James Longstreet’s attack, which was aimed at turning the Union left flank. Longstreet’s attack ultimately failed, but the carnage which took place at Gettysburg on July 2 forever etched names like Devil’s Den, the Peach Orchard and Little Round Top into American memory.

One of the bloodiest actions of the day occurred on a part of the Rose family’s farm known as “The Wheatfield.”  Here, heavy columns of Confederate infantry - men from Semmes', Kershaw's and George "Tige" Anderson's brigades - hammered the Union defenders for much of the day and control of the field swayed back and forth between the two armies. About 5:30 p.m., Union Brig. Gen. John Caldwell, whose division had borne the brunt of the attack in the Wheatfield, looked for help to try and stem the tide and found Col. Jacob B. Sweitzer’s brigade, which included the 4th Michigan Infantry, Sweitzer was ordered into the fight against overwhelming odds, which now included Brig. Gen. William Wofford’s brigade of Georgia troops. Plunging into the fight, the 4th Michigan was hit from all sides and nearly surrounded by the oncoming Confederates. The unit’s commander, Col. Harrison H. Jeffords (left), was at the head of his troops when he saw the colors of the regiment fall into the hands of some of the Georgians. Rushing to defend the flag, which had only recently been presented to the regiment, Jeffords shot the Confederate soldier holding the flag and then grabbed the colors himself. In the hand-to-hand fighting which ensued, Jeffords was grievously wounded by a bayonet thrust, a wound which caused his death early the next morning. Jeffords, who was just twenty six years old, would be the highest ranking officer in the Civil War to die from a bayonet wound. His final words were said to have been "Mother, mother, mother." 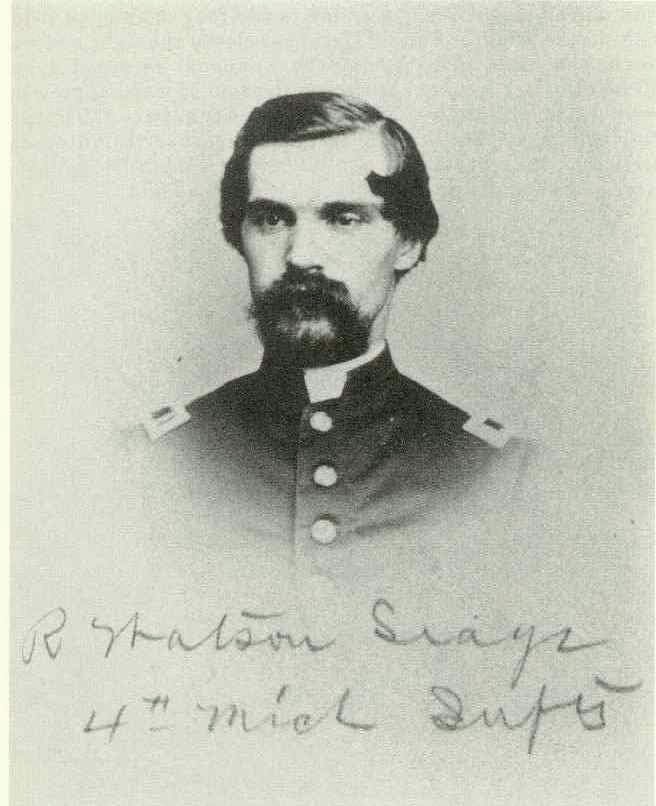 After fighting all afternoon for control of the Rose farm, Confederate troops from Maj. Gen. Lafayette McLaws’ division, almost all of them from Georgia and South Carolina, finally took the Wheatfield for good. The other brigade in the division, Barksdale’s Mississippi Brigade, composed of the 18th, 13th, 17th and 21st Mississippi Infantry regiments, fought an equally ferocious battle in the nearby Peach Orchard. The cost of the struggle for the Wheatfield was heavy indeed. On the afternoon of July 2nd, six Confederate brigades and thirteen Union brigades* were engaged in the relatively small area. Of the nearly 23,000 Union and Confederate soldiers who fought in the Wheatfield, nearly a third were counted as casualties. From the 4th Michigan, that number included the gallant Col. Jeffords and two other officers who were involved in the melee over the flag. One, a Lt. Michael Vreeland, was shot twice and then smashed in the skull with a musket. The other officer (above) was a Second Lieutenant from White Pigeon, Michigan. Enlisting in 1861, he had already been wounded at both Malvern Hill and Antietam. At Gettysburg, while fighting alongside his colonel, the 26-year-old was severely wounded in the chest, arm and in both legs. Unable to move and then trampled by Confederate troops marching through the field, he was rescued the next morning by his brother Henry, a corporal in Co. E. Over the next few months, Henry helped nurse his brother Richard back to health, and in September the two brothers took a train back home to visit their father. 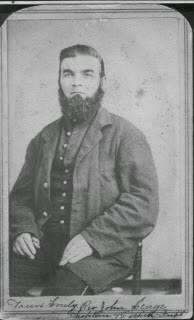 Like his sons, Richard Watson and Henry Starke’s father also served in the 4th Michigan Infantry. A native of England, he was an Anglican priest before coming to the United States in the 1830s, where he eventually accepted a call to serve as pastor of a Baptist church in Michigan and settled in a village just north of the Indiana state line called White Pigeon. In 1862, he signed on as the regimental chaplain for the 4th Michigan, where he ministered to the spiritual and physical needs of the men. Soon after taking on his role as chaplain, the regiment was heavily engaged at the battle of Malvern Hill on July 1, 1862. Among the 164 casualties suffered that day was the unit's commander, Col. Dwight Woodbury. The good reverend (left) was with the regiment throughout the next several campaigns, including the battle of Fredericksburg in December 1862. Six months later, on June 8, 1863,  he was attacked during a chance encounter with a group of Confederate guerrillas. On that occasion, he was riding alone from Fredericksburg to Washington to deliver mail and cash bound for the families back home from the men in the regiment. When challenged by the Confederates, who identified themselves as some of John Singleton Mosby's men, the alert chaplain spurred his horse and somehow managed to escape capture. In the process, however, he was severely wounded in the wrist and chest and lost a significant amount of blood. Despite this, he made it back to the Union lines, where he was cared for by George Gordon Meade's chief surgeon. After recovering in the hospitals in Washington, he went back home to Michigan, where he no doubt happily received his two sons during their visit after the fight in the Wheatfield. Incredibly, all three men returned to active duty in the Union army. John, the father, served the longest, finally mustering out in 1866. He died in 1883 after contracting hepatitis during a visit to his son Watson’s home in New Jersey. Watson lived until 1908, no doubt suffering for many years from the wounds he received at Gettysburg. At his death, he was laid to rest beside his father in the Fountain Cemetery in Staten Island.

Like his older brother, Henry also had an illustrious career in the army. Enlisting in September, 1861, he served throughout the Peninsula Campaign, and fought at Antietam and Fredericksburg, where he is credited with capturing a Confederate flag. Writing later about the regiment's experience at Fredericksburg, Henry recalled that "Never in the history of the Army of the Potomac was there such a pitiless, useless, hopeless slaughter. Never did men fight better, or die, alas, more fruitlessly than those thrown against these heights and stone walls, bristling with an hundred cannon."  Following the battle of Gettysburg and the months he spent taking care of his wounded brother, Henry (left) returned to the regiment and was promoted to color sergeant, after which he fought in the Overland Campaign, including the battles of the Wilderness and Spotsylvania. When the original unit was disbanded and reorganized, Henry decided not to reenlist, though both his father and brother did. During his service with the 4th Michigan, he became the de facto regimental historian and in the post-war years was active in veterans' reunions. In addition to writing accounts of the regiment's campaigns, he composed and read a lengthy poem (with a total of twenty-nine verses) during the dedication of the 4th Michigan monument at Gettysburg in June, 1889. The monument (above right), which includes another bit of his poetry, stands at the location of Col. Jeffords' valiant attempt to save his unit's flag; as such, the monument also stands on the site where Henry found and rescued his brother in the early hours of July 3, 1863. The final few verses of Henry 's poem, which has the ring of a benediction, is as follows:

Live honest lives. Let every one
Be faithful 'till his time shall come,
Then heaven will surely "Welcome Home"
Each Noble Son of Gettysburg.

"God of our sires," within whose hand
The Nations rest, "like grains of sand."
Bless Thou our great and glorious land
Baptized in blood at Gettysburg 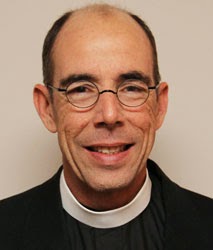 After the war, Henry settled in Lansing, Michigan and had a prominent career in the fire insurance business. He died on April 9, 1899 (on the anniversary of Lee's surrender at Appomattox) and is buried in the Mount Hope Cemetery in Lansing. Along with his father and brother, Henry was proud of his service to his country and his role in preserving the Union. He was equally proud of the way the nation had reunited, however, and spoke eloquently concerning the eternal bond between the blue and the gray. In that light, Henry might be pleased to know that a descendant of his is still in the business of reconciliation and is carrying on the legacy of Henry’s father as a minister. In fact, Henry’s great great grandson, the Rev. Brian R. Seage (left), will soon become the next Episcopal bishop in Mississippi. To be sure, John Seage, R. Watson Seage and especially Henry Starke Seage would be proud to know the nation has indeed healed from the wounds at Gettysburg. 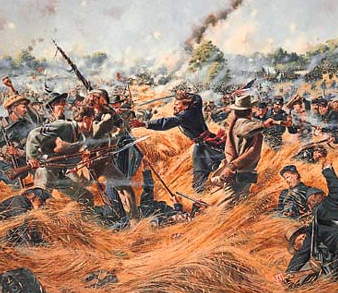 POSTSCRIPT: Col. Jeffords' struggle to save his unit's flag in the Wheatfield was depicted by the acclaimed artist Don Troiani in the print "Saving the Flag." (right) In addition to Col. Jeffords, Troiani identified just one other Union soldier by name in the image – that of Lt. Richard Watson Seage. Brian Seage’s father, a World War II veteran, is named for him.

* While the number of regiments seems heavily weighed toward the Federals, Union regiments were typically smaller than Confederate regiments.