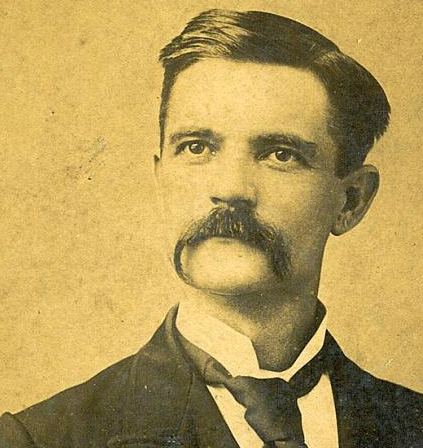 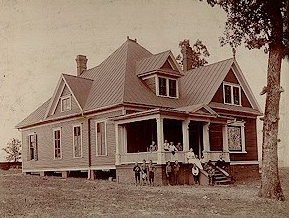 Sam Jones was born in Oak Bowery, Alabama in 1847. At age nine, he moved to Cartersville, Georgia, with his father (his mother having died) and graduated from a local academy. His father greatly desired that Sam become an attorney and, subsequently, he passed the bar and became a lawyer in 1868. Unfortunately, he wasn’t a very good lawyer and as a result fell into fits of depression and alcoholism. Working a series of odd jobs, he was barely able to support his growing family. In 1872, though, all that changed when Sam Jones (right) experienced a dramatic religious conversion as his father lay on his deathbed. He immediately gave up drinking and later that same year entered the ministry and became an itinerant Methodist preacher. In 1881, he was appointed as the agent for the North Georgia Orphans Home (right), which was in Decatur, Georgia. In an effort to raise enough funds to keep the orphanage afloat financially, Jones started traveling the state, preaching and speaking on behalf of the orphanage. In the process, he found he had a gift for revival preaching and he began attracting large crowds. In 1884, Jones was invited to come to Memphis, where his preaching attracted such attention he was invited to Nashville the next year. There, a man named Tom Ryman was converted at one of Jones’ services.

Though lacking any formal education, Tom Ryman was a shrewd businessman. By 1885, Ryman controlled a fleet thirty-five riverboats and a string of saloons. Among Sam Jones’ favorite targets during his sermons was drinking and gambling, both of which cut into Ryman’s profits. So, with the intent of disrupting Jones’ revival, Tom Ryman went to one of the services to “raise a ruckus.” During the revival, however, Ryman was converted and pledged to build a building large enough to accommodate anyone who wished to hear Jones and other revival preachers in Nashville. Seven years later, the Union Gospel Tabernacle was completed at a cost of $100,000, and Jones preached there on June 1, 1892. Ryman died twelve years later and Jones preached his funeral on Christmas Day. During the funeral, which was attended by 5,000 people, Sam Jones proposed that the Union Gospel Tabernacle be renamed the Ryman Auditorium (left) in Ryman’s honor. Today, the Ryman Auditorium is a National Historic Landmark, recognized both for its architecture and its contribution to country music, as the building was the home of the Grand Ole Opry for many years. 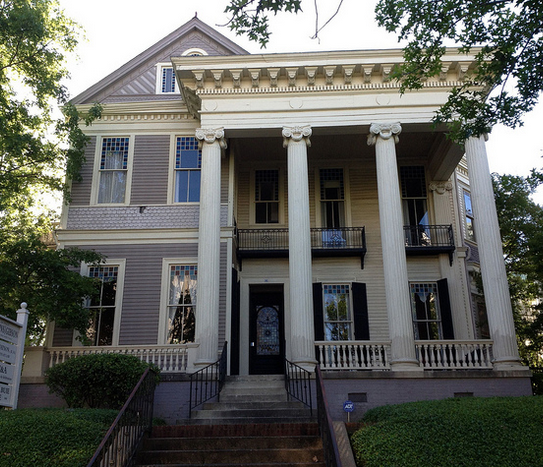 Four years after Sam Jones held his great revival in Nashville, he came to Jackson, Mississippi, at the request of both the city fathers and Bishop Charles Betts Galloway of the Methodist Episcopal Church, South. Jones arrived by train on June 4, 1889. He had visited Jackson the previous November and had spoken to a packed audience in the House of Representatives chamber of the state capitol (now the Old Capitol Museum). At that time, he promised to return to Jackson to hold a revival, and now in June he was delivering on that promise. Jones had just concluded a series of revival meetings in Danville, Virginia, and arrived on the Vicksburg and Meridian Railroad after a long journey. Despite that, he asked to be taken directly to the revival site instead of taking time to refresh himself at the home of Major Reuben Webster Millsaps on North State Street. This house, now known as the Millsaps-Buie House (above right), was brand new, having been completed the year before. Instead of going to the Millsaps home first, Sam Jones stated that he was anxious to get to work, as “Jackson has a pretty hard name and he wanted to meet its sinners early and intended to stay with them late.” As such, he was taken directly from the train depot to the meeting place, which was held in a large tent erected on the north end of the capitol grounds (about where the War Memorial Building is today). The “mammoth tent” had seating to accommodate four thousand people, and special train fares were arranged to bring visitors to Jackson from as far away as Osyka and Michigan City on the Illinois Central. The revival services lasted more than a week and drew enormous crowds to hear the great evangelist, who preached three times each day (at 9:30, 3:00 and 8:00). 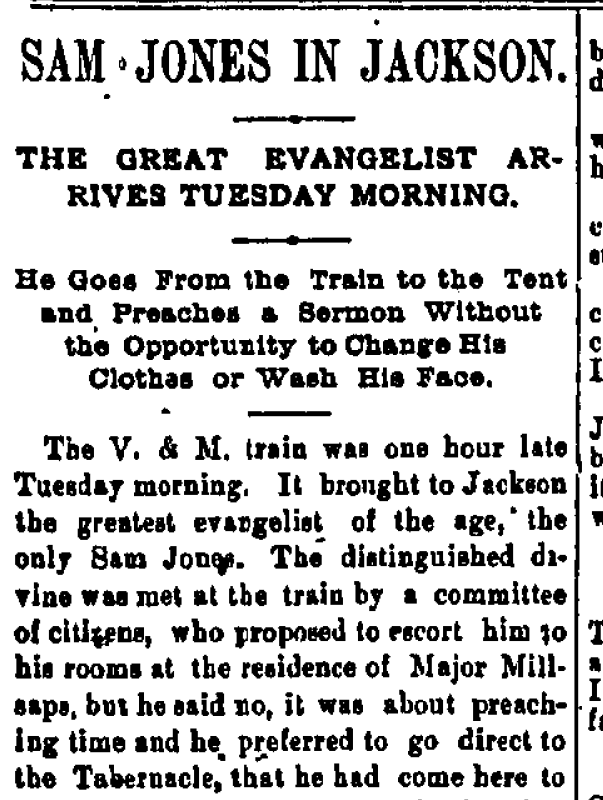 It must have been quite a show. Jones’ preaching style was described in a variety of ways by those who experienced the revival. “He plays upon an audience as a skillful master would a harpsichord,” a reporter observed. “In truth, to Sam Jones an audience is a marionette, subservient to his power – to weep, to laugh, to sigh, to scream, as pleases him.” Continuing, the writer said of Jones: “He is versatile, facile. Felicitous. At times reverent, tender, touching and pathetic; then jolly, joking, humorous and ridiculous; often rough, rude, loud and slangy; but whether tender or rough, always pleasing and entertaining, ever the inimitable, unapproachable Sam Jones, who says what he pleases in his own quaint way, without offending anyone. No other man could do as he does and live.” A reporter for the Brookhaven Leader observed that “his speech rolls like an endless chain and every link is a new surprise. An inexhaustible magazine of wit, humor and quaintness, of eloquence, pathos, fire and dynamite, his hearers never know which is going to explode until they are hit.” After observing Jones in action, a gentleman from Jackson, who was “not known for his piety,” said simply that he was “hell on wheels.” Whatever one thought of his style, it seemed to work. Although he was a Methodist minister, Jones attracted folks from many different denominations, and he appealed to the common man in his sermons, often focusing on the evil influence of money and power. In his first sermon in Jackson, despite the fact that his tent was next to the state capitol, Jones took aim at those in power: “I would rather be an humble Methodist minister than President of the United States. I would rather be a consistent Baptist preacher than the Czar of Russia; I would rather a faithful Presbyterian minister than to occupy the highest position on earth; I would rather be myself than Benjamin Harrison, because mine is the biggest job and will last the longest, and I don’t have to stoop to the damnable tricks of the politician.” The Jackson revival lasted until the following Tuesday, June 11, at which time he bid adieu to Jackson. In departing, he said he “never labored in a place where I had more co-operation and so little opposition. God bless the good people of Jackson.”

After leaving Jackson, Jones traveled to the mill town of Wesson, where he held forth for another four days and again attracted enormous crowds. The meetings in Wesson were held in a part of the Wesson Mill facility, which was, unfortunately, exceedingly hot. As a result, several persons fainted during the revival. Still, a crowd 8,000 was on hand for the Sunday morning service, where he was joined by the pastors of the local Baptist, Methodist and Presbyterian churches. Jones’ theme during the Wesson revival focused on “profanity, Sabbath-breaking, licentiousness [and] intemperance.” After the final service on Monday morning, he was presented a collection of $1,023.75 for the work of the North Georgia Orphans Home. All other expenses were paid by the Wesson Mills, who also gave time off to their workers so they could attend some of the services.

With his sojourn into Mississippi complete, Sam Jones moved on to other fields of endeavor. Continuing to preach against entertainments such theaters, dime novels, playing cards, baseball and dances, Jones' basic message to his hearers was to "Quit Your Meanness” and to turn instead to a life that was as sin-free as possible. Throughout, his main target was alcohol. "I will fight the liquor traffic as long as I have fists, kick it as long as I have a foot, bite it as long as I have a tooth, and then gum'em till I die," he said. In time, Jones broke away from the Methodist Episcopal Church, South, because some Methodist leaders did not approve of his coarse and unorthodox style. From then until his death in 1906, he continued to preach as an independent evangelist. Jones died on a train near Little Rock, Arkansas, on October 15, 1906, just one day before his fifty-ninth birthday. He was on his way home to Georgia from preaching a revival in Oklahoma City. His body was taken to Atlanta, where he lay in state in the capitol rotunda and was buried in the Oak Hill Cemetery in Cartersville, Georgia. His home in Cartersville (above right), known as “Rose Lawn,” is now a museum. Had he lived longer, Sam Jones might have achieved even more renown as a preacher. As it was, he captivated audiences far and wide, including thousands of Mississippians in the summer of 1889.


Rose Lawn: http://www.georgiaencyclopedia.org
Posted by Jim Woodrick at 10:50 AM