The Origin of Attala 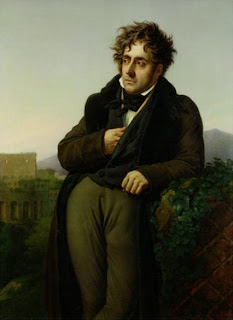 Kosciusko, Mississippi, is known by many for its unusual name, which is in honor of Andrzej Tadeusz Bonawentura Kościuszko, a hero of both Poland and the American Revolution. How and why 'Kościuszko' became 'Kosciusko' is an interesting story (and perhaps fodder for a future blog topic), but the name of the county of which Kosciusko is the seat probably doesn't register a second thought for most, perhaps because it sounds somewhat like other Mississippi place names with Native American origins. In fact, the name 'Attala' comes from an interesting source, arrived at, one might say, in a “novel” fashion.

François-René Chateaubriand (right), a French writer, politician and diplomat, was born in 1768. Considered among the most influential, early writers during the Romantic period, Chateaubriand was a royalist politically and a defender of the Catholic Church. Commissioned as an officer in the French navy, he was in league with the revolutionaries when the French Revolution broke out, but soon turned against the movement when things got violent, and in 1791 came to the United States as a refugee. While in America, Chateaubriand is said to have toured the deep South and lived among the Indians in the region. He also claimed to have met George Washington during his visit. This experience served as the backdrop for a couple of short novels, both part of a larger work known as Les Natchez published in 1826. The first two novels were called Atala and René, published in 1801 and 1802 respectively.

In Atala, the story involves a girl who falls in love with a Natchez Indian named Chactas, the son of the Natchez Chief. Atala (the girl) has ties to the Muscogee Indians but is a convert to Christianity. When the Muscogee attack the Natchez village, Chactas manages to escape, only to be caught by his enemies. Atala, filled with compassion (and maybe a bit of passion as well), frees Chactas and flees with him to Mississippi. However, she had taken a vow earlier in her life to remain celibate and devote herself to the church. Faced with the dilemma about whether to keep her vow to the Church or to succumb to her more earthly desires, she decides to poison herself in order to keep herself pure, and she dies. Chactas, meanwhile, impressed with the piety of a monk that the couple meets along the way, also converts to Christianity. Mix in a wandering monk and plenty of fighting between the Indians, and you’ve got quite a love story, all set in a lush physical environment. For example, in describing the animals of the wild forest, Chateaubriand wrote: 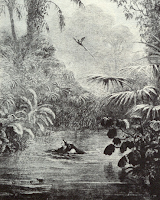 A multitude of animals, placed in these retreats by the hand of the Creator, spread about life and enchantment. From the extremities of the avenues may be seen bears, intoxicated with the grape, staggering upon the branches of the elm trees; caribous (deer) bathe in the lake; black squirrels play among the thick foliage; Mocking Birds and Virginia Pigeons not bigger than sparrows, fly down upon the turf, reddened with strawberries; green parrots with yellow woodpeckers; cardinals red as fire, clamber up to the very tops of cypress trees; hummingbirds sparkly upon the jessamine; and birdcatching serpents hiss while suspended to the domes of the woods, where they swing about like the creepers themselves. 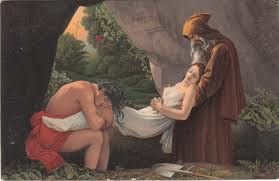 Lavishly illustrated, Atala was wildly popular, and was reprinted five times in its first year of publication, making Chateaubriand a successful writer. Writing books was hardly his only accomplishment, however. Throughout his life he also dabbled in European politics, went in and out of favor with Napoleon and the French royalty, served as a diplomat to the Vatican and barely escaped execution. For all that, however, he never actually set foot in the deep South nor spent any time with George Washington or any Native Americans, as claimed. Instead, he based his novels on the accounts of others who had actually lived among the Natchez Indians. Although he used their work as a basis for his novels, his was a highly romanticized image and bore little resemblance to reality. That didn’t seem to matter much to the readers, though. So popular was the work that it inspired this painting (above) by Anne-Louis Girodet called “Atala at the Tomb” (1808) and is the name of a small species of butterfly discovered by Cuban Zoologist Felipe Poey, who established the Museum of Natural History in Havana in 1839.

Apparently, one of Chateaubriand’s fans was a man named Gordon D. Boyd. Born about 1801, Boyd was once the publisher of The Woodville Republican newspaper. In the 1830s, Boyd became an attorney, moved to Columbus, Mississippi, to work as a land receiver appointed by Andrew Jackson, and then moved to what would become Attala County and Kosciusko. It was Boyd who suggested the name “Attala” for the county because he believed the lush descriptions in the book sounded very similar to the beautiful countryside of his adopted home (why an extra ‘t” was added to the name is unknown). Others seemed to agree, as no objections to the name were recorded. Thus, Attala County, Mississippi, is named not for a prominent political figure or a war hero or is even a real Native American name, but is based on a fictional character created by a European aristocrat and author who had no real idea what Mississippi looked like. 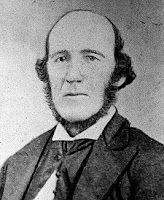 After selecting the name of the county, Gordon Boyd was elected to the Mississippi State Senate in 1837 and represented Attala, Leake and Neshoba Counties. He died in 1850 at age 49 of cholera while on a business trip to Louisiana. Interestingly, Boyd’s younger brother was James Hervey Boyd (right), who moved to Jackson in 1834, where he operated a drug store, worked as an auctioneer, and served four terms as Jackson’s mayor, among many other activities. Boyd’s home, “The Oaks,” is still standing and is now a house museum on North Jefferson Street in Jackson.