Several miles south of Kilmichael, Mississippi, located in Montgomery County, is a church with a long history of supporting education, and one of the students who benefited from the church's commitment to education is today one of the best known musicians in the world. 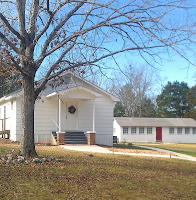 Elkhorn Primitive Baptist Church (left) was founded by Syrus Bogan Henson (1835-1910), a former slave. Born on a plantation in North Carolina, Syrus Henson was “given” as a wedding gift to the Flowers family. After the Civil War, the Flowers moved to Mississippi and paid Henson to move the family’s belongings. With that money, Henson purchased land near Kilmichael, where the Flowers also settled. A minister as well as a farmer, Syrus Henson began preaching under a brush arbor to members of his family and others in the community. After establishing the church, Henson served as the first pastor. Syrus and his wife Fannie had twenty-three children. The twenty-second child, born in 1899, was a son named Luther Heron (just imagine having twenty-one older brothers and sisters!). 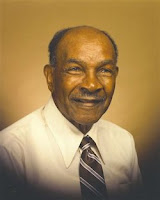 Luther Heron Henson (right), as did most of his siblings, attended the Elkhorn School and later the Greenwood Normal School. He also took correspondence courses from Rust College. After completing his education, Luther Henson returned to teach at the Elkhorn School, taking up the work of his father, who died in 1909 at age 74 after falling off a horse. For many years, Luther was the only teacher at Elkhorn and influenced hundreds of children. Among his students was a young man named Riley B. King. Born in 1925 in Itta Bena, Mississippi, into a sharecropper’s family, Riley’s parents separated when he was five years old. After his mother moved them to Kilmichael, which was located in the “hill country,” young Riley attended the Elkhorn School, walking several miles a day to attend the one-room school heated only by a wooden stove. At the time (in the early 1930s), the school had about seventy students. As a teenager, Riley B. King, better known today as “B.B.,", left the school and returned to the Delta to work on a plantation (his mother died when he was nine). Although he was a student at Elkhorn for just a few years, B.B. King has stated that Luther Henson was “the only man that has ever been able to penetrate this thick skull of mine.” In addition his early education, B.B. King also owes a musical debt to Elkhorn. His first performance as a musician (as a singer) was with the Elkhorn Jubilee Singers, which he formed with a cousin.

Luther Henson, who followed in the footsteps of his father in support of the Elkhorn Primitive Baptist Church and the Elkhorn School, died in 2001 at the age of 101. He is buried in the Elkhorn Cemetery along with his father and many other members of this remarkable family. B.B. King's mother and grandmother are buried in nearby Kilmichael, and King (left) returns to the area often to pay homage to his days in Kilmichael and at Elkhorn.