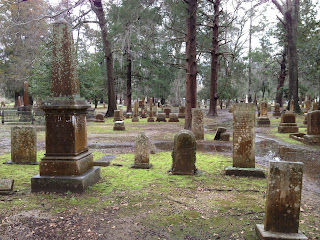 Wintergreen Cemetery in Port Gibson, Mississippi, is a place that looks every bit the part of a Hollywood movie set. Draped in Spanish moss, Wintergreen is the final resting place for thousands of Port Gibson’s citizens from all walks of life – in fact, there are more than twice as many in the cemetery as live in the town today (not to mention those buried in the city's other cemeteries). With interesting gravestones at every turn, Wintergreen Cemetery is a true destination for anyone interested in classic old Southern graveyards. 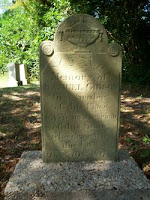 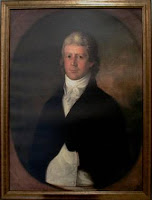 Wintergreen Cemetery was established in 1807, not long after the venerable Samuel Gibson, credited with the founding of Port Gibson, established a plantation in the area. A relative of Tobias Gibson, the famous Methodist circuit rider, Samuel Gibson was, among other things, a beekeeper and a grower of orchids. Gibson died at age 69 in 1817, just ten years after the cemetery was established. His wife Rebecca joined him in death four years later, in 1821. Other prominent citizens are scattered throughout Wintergreen, including Peter Van Dorn, born in 1773. In 1795, Van Dorn graduated from Princeton, moved to Virginia and established himself as a lawyer. After his wife died at an early age, he moved to Natchez in the Mississippi Territory and later to Port Gibson. Still a young man, Van Dorn (lower left) was named 'Marshall of Natchez' in 1804 and was later a probate judge. In 1817, when Mississippi became a state, he was the first clerk of the House of Representatives and later helped design the new capital city in Jackson. In fact, it was Van Dorn’s “checkerboard” pattern, based on a design by Thomas Jefferson, which became the plan used for the city, with alternating squares of buildings and parks. Unfortunately, only one park (Smith) remains today. A close friend of Andrew Jackson, Van Dorn died in 1837 and was buried at Wintergreen. Many years later, his son Earl was laid to rest beside him. The story of his death is a tale of intrigue and endless speculation.

A native of Port Gibson, Earl Van Dorn was a West Point graduate. He was brevetted twice during the Mexican War for bravery and was wounded in action at Mexico City. After the war ended, Van Dorn served in the U.S. cavalry out west and was again wounded while fighting Indians. Always considered a dashing and handsome man, Van Dorn was considered a hero before the Civil War. Joining the Confederate cause, he quickly climbed in rank. By the second year of the war, he was given army command and a great deal of responsibility. Unfortunately, his personal bravery and good looks did not translate into victories, and Van Dorn failed at both Pea Ridge and Corinth, both crushing defeats for the Confederates. Although he would lead a very successful raid on Holly Springs in December 1862, Van Dorn's days as an army commander were over. He was still considered a good cavalry commander, however, and could possibly have salvaged his tarnished reputation in time. Time, however, was not on his side. On May 7, 1863, while stationed near Spring Hill, Tennessee, Van Dorn was murdered by Dr. George B. Peters. Many believe it was in retaliation for Van Dorn's rumored dalliance with Dr. Peters' young and attractive wife, while others contend it was an assassination by a pro-Union man. The truth may never be known, but Earl Van Dorn lay dead regardless. Because Port Gibson was at the time behind Union lines, his body could not be transported to his hometown and he was instead buried at his father-in-law's plantation in Alabama. In 1899, Earl Van Dorn's body was removed to Wintergreen Cemetery and laid to rest beside his father, both of them facing south. At the time he was reburied, the general's casket was opened. To those who gazed on his remains, he was in a remarkable state of preservation, including his golden locks of hair.

Another resident of Wintergreen who met a violent end was Capt. George V. Moody. Born in 1819, Moody was an artillery officer with the Madison (La.) Artillery and served in Lee's Army of Northern Virginia. A respected artilleryman, he served at Antietam and Gettysburg, among other battles. Captured at Knoxville, Moody was sent to prison, eventually landing at Camp Chase in Chicago. Returning to the army, he accompanied Jefferson Davis after the fall of Richmond, and then practiced law after the war ended. Reportedly a difficult person to get along with, he was murdered in Port Gibson in 1869 by a man had reportedly been insulted by Moody at the Claiborne County courthouse. The assailant killed Capt. Moody with a shotgun blast to the head. 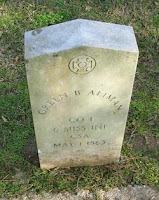 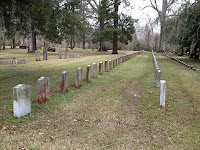 Also among the dead at Wintergreen Cemetery are many of the Confederates killed during the battle of Port Gibson, fought on May 1, 1863 (just a few days before Earl Van Dorn's murder). Removed from the battlefield by the citizens of the town, the Confederate dead are laid to rest in long rows of graves, initially marked with small unmarked stones. Individual gravestones were added in 1986 by Roger Hanson of Pascagoula, who diligently researched the names of those killed in action at Port Gibson, among them Green B. Altman, a private in Co. I (the “Rankin Greys”), 6th Mississippi Infantry, one of nearly 800 casualties. Although he was not killed in battle, Benjamin Grubb Humphreys is also buried at Wintergreen. A Confederate Brigadier General who also in Lee's Army of Northern Virginia, Humphreys served in the Mississippi Legislature in the 1830s and then as Governor from 1865 to 1868, although he was physically removed from office by U.S. military authorities on June 15, 1868 and replaced by the Reconstruction governor Adelbert Ames. In December 1882, Humphreys died at age 75 at his home in Itta Bena. Taken by train back to his native Port Gibson, his funeral at the Methodist Church was attended by scores of Confederate veterans who had gathered to honor their former commander. In addition to an hour-long eulogy by the pastor, the choir sang "Come Ye Disconsolate" and "Nearer My God to Thee." 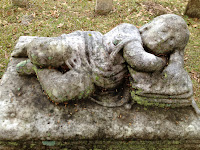 Of course, there are many other prominent (and not so prominent) persons besides soldiers buried at Wintergreen Cemetery, each one with a story to tell. Some are now known only to God. As with any burial ground, perhaps the most tragic stories are those of children who died in the flower of their youth, their graves often marked by figures of tiny angels or lambs erected by grieving parents. Like most cemeteries, Wintergreen has many such stories to tell. It has the added bonus of being among the most scenic places in Mississippi.