In 1929, the Sells Floto Circus was winding up its touring season in Mississippi. That year, the circus was part of a consortium of circuses, including the Hagenbeck-Wallace, John Robinson, Sparks and Al G. Barnes circuses, all forming the American Circus Corporation. The whole group had been purchased that year by John N. Ringling (one of the famous Ringling Brothers) to create a virtual monopoly of shows. However, the Sells Floto Circus still toured under its own name and was scheduled to make an appearance in Jackson on October 1. As usual, the management sent advance men to put up advertising for the circus, which had been drawing huge crowds because of Tom Mix, the cowboy star. Arriving in the capital city in mid-September, the advance men proceeded to put up posters and billboards up and down Capitol Street until the store windows were “covered with tidings of the show’s approach.” Unfortunately, this did not sit well with the city council, and the eight men were promptly arrested for “illegal bill posting.” Although it was certainly not the first time the circus had to deal with issues involving their posters (on occasion they were dragged into court with other circuses over such matters), Sells Floto clearly had some public relations work to do in Jackson.

There were plenty of other posters and advertising bills in Jackson, so litter wasn’t the problem. In fact, there were “luridly attractive” fliers by the thousands nailed to every post and pole from Jackson to Memphis placed by the 101 Ranch Wild West Show, which was scheduled appear at the Mississippi State Fair. Unfortunately, Sells Floto was slated to come to town at the same time the state fair would be at the fairgrounds, and the city had little interest in diverting customers away from the Wild West Show. Sells Floto had Tom Mix, though, and had been attracting throngs of onlookers at every stop. After the eight men released, the circus management (officially Ringling Brothers & Barnum and Bailey) sent a young lawyer to represent their interests. A recent graduate of the University of Mississippi law school and newly married, the circus’ attorney would later make a big name for himself in Mississippi politics: Ross Barnett. After meeting with the mayor and city council (Mayor Walter Scott was actually a supporter of the circus), the 31-year old Barnett (above) informed city officials that the circus show would proceed as planned on October 1, but would be held “outside the city limits, of course.” To show his appreciation, Mayor Scott agreed to let the circus hold a parade for those who couldn’t afford a ticket to see the elephants and other attractions, including Tom Mix. However, E. L. Bailey, the Jackson school superintendent, refused to allow the schools to close for “show day,” as had apparently been the tradition. On the other hand, the superintendent announced that any child attending the parade would be counted as an excused absence. Based on the number of people who met the circus at the rail yard, there were likely very few children in school that day. 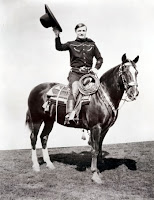 On Tuesday, October 1, the Daily Clarion-Ledger reported on the arrival of the circus and gushed over the appearance of the main attraction, Tom Mix. Thomas Hezikiah Mix, born in Pennsylvania in 1880, was a bona fide movie star. Appearing in more than 160 cowboy pictures in the 1920s, Mix (right) was known for doing all sorts of tricks with his horse, Tony (known as “The Wonder Horse”). By the 1930s, Mix was on his fifth wife and had blown through much of his personal wealth and then, tragically, died in an auto accident on October 12, 1940, in Arizona. After swerving to avoid a washed-out bridge, Mix was killed when an aluminum suitcase filled with money, travelers’ checks and jewelry flew forward in the car and broke his neck. But that was still more than a decade away. In 1929, he was the equivalent of a rock star. “Mix, by his athletic living, clean habits and dare-devil prowess…” the paper reported, “has endeared himself to the youth of the land, and he is every inch the ideal heroic figure the motion picture camera has depicted.” 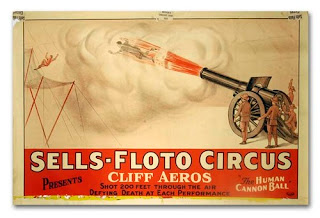 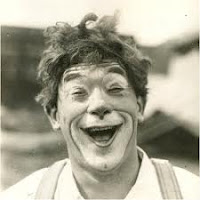 In addition to Tom Mix, the circus also featured Cliff Aeros, the Human Cannonball (a native of Germany) and Poodles Hanneford (below left) with his Famous Riding Hannefords, along with all the trappings of a circus big-top. Born in a circus wagon in England, Hanneford was descended from jugglers who entertained King George III. After moving to the United States in 1915, Poodles (a nickname he acquired as a child) joined the Ringling Brothers circus and continued to perform as a clown and trick rider until 1954. To meet Ross Barnett’s promise to perform outside the city limits, the tents were set up in “Latimer’s pasture” just off of Claiborne Avenue, which in 1929 was the western city limits of Jackson. Thus, while technically “outside the city limits,” it was by a few feet at the most. Meanwhile, the rival 101 Ranch Wild West Show went off without a hitch at the state fairgrounds. Two days later, the circus moved to Meridian and set up shop there. Reporting on the “big show,” the Meridian Star noted that the circus featured “three herds of elephants, a 50 den menagerie of wild beats and an excellent side show of freaks.” After finishing the show in Meridian, the Sells Floto Circus folded its tents and headed home to Indiana, where the circus went into winter quarters. Alas, the great days of the traveling circus were quickly drawing to a close. The decline was due to a number of factors, not the least of which was the Great Depression, which hit like a hammer at the end of the month. Also, other entertainment venues, especially the same movie industry that made Tom Mix famous, were more widely available to average Americans. Finally, the beginnings of suburban sprawl and traffic meant fewer places for the circuses to go and fewer opportunities for parades of clowns, bands and elephants. By 1932, Sells Floto, along with most other traveling circuses, were no more and in 1939 the horse-drawn circus parade became a relic of the past.

Although Sells Floto ceased operation in 1932, there is still one curious relic of the circus on display. On a very hot day in August 1928, Mary, an Asian elephant, broke loose from her trainers and went charging toward Main Street, which was filled with people. Concerned that someone might get trampled to death, the mayor of Lewiston (who also happened to be a big game hunter) went home to get his gun. Although her handlers had calmed her down, the big-game-hunting mayor shot Mary to death. Witnesses indicated that the elephant had simply been thirsty and was trying to get a drink of water. Unfortunately, Mary’s death was just one of numerous elephant deaths during the traveling circus era. Today, if you’re ever in Lewiston, Idaho, you might be able to visit what remains of Mary the elephant (right), which is her trunk mounted on a trophy. This odd (and disturbing) relic is in a private collection.

Of course, there are still circuses. In fact, the Ringling Brothers and Barnum & Bailey Circus recently came to Jackson where they advertised a show full of “astounding acrobats, vibrant visuals and prodigious performers.” The “Greatest Show on Earth” no longer travels by rail, though, and doesn’t have a parade of elephants down Capitol Street. They did, however, get to perform at the Mississippi State Fairgrounds, a location unavailable to them in 1929. And this time, hopefully, no one was arrested for illegal bill posting.