Decades before the Civil Rights Movement brought national attention to the issue of racial inequality in the segregated South, one woman's quiet public service in a small Mississippi town caught the attention of an American president. The Federal government's effort to protect and defend Minnie Cox perhaps serves as a bit of foreshadowing for conflicts yet to come over the issue of race. 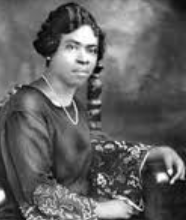 Minnie M. Cox (1869-1933) was one of two daughters born to William and Mary Geddings, both former slaves, in Lexington, Mississippi. After attending school in Lexington and Indianola, she went to college and graduated from Fisk University in Nashville. A successful businesswoman, both Minnie and her husband Wayne, who was principal of the Indianola Colored School and the city's first black alderman (in 1888), were active in the Republican Party. As a result, Cox (right) was appointed postmaster of Indianola by President Benjamin Harrison, a Republican, becoming perhaps the first African American woman postmaster in the nation. The job was a fairly lucrative one, paying a handsome salary of $1,100 a year. By all accounts, her service as postmaster was conducted in a “most efficient” manner, even installing a telephone at her own expense so her patrons could call to check to see if they had mail. Despite her efficiency, Cox was replaced in 1892 by President Grover Cleveland, a Democrat. Cleveland's appointee was Mrs. D.J. Treadwell, who was white. 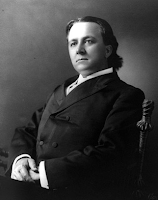 As soon as the White House changed parties again, so did the Indianola postmaster. On May 22, 1897, Cox was reappointed to the post by another Republican, President William McKinley, and then reappointed for yet another term by Theodore Roosevelt. In other towns across the state, other blacks were placed in charge of the local post offices, including Ocean Springs, where Thomas Isaac "Ike" Keys (left), born in Brookhaven in 1861, served in the position off and on until 1911. Patience was wearing thin with whites, however, who saw their political influence on the rise following the end of Reconstruction. In the Mississippi Delta, the anger was fueled by the editor of the Greenwood Commonwealth, the self-proclaimed "redneck" James K. Vardaman, who chastised the white people of Indianola for "tolerating a Negro wench as postmaster." Whether Vardaman (right) was simply playing to his audience or actually wanted the job for himself is unknown, but the result was a growing demand by white citizens, along with threats of violence, for Minnie Cox's removal. To defuse the situation and prevent violence, Cox tendered her resignation. President Roosevelt refused to accept it, however, and instead decided to make Indianola an example for the rest of the nation. 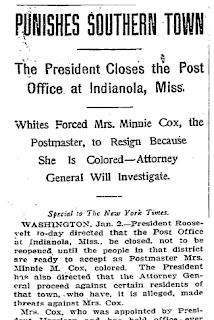 After discussing the situation with his Cabinet, where some recommended the use of Federal troops to protect Mrs. Cox, Roosevelt decided instead to close the post office at Indianola until such time that the whites accepted her as postmaster. The post office was closed on January 3, 1903. To make things difficult, the U.S. Mail was rerouted to Greenville, a distance of twenty-five miles. From the White House, Roosevelt declared that the action was in response to "reports of Inspectors and information received from various reputable white citizens of the town and neighborhood...that the resignation was forced by a brutal and lawless element, purely upon the ground of her color, and was obtained under terror and threats of physical violence." Above all, Roosevelt took the action in the interest of "the preservation of law and order and the assertion of the fundamental principle that this Government will not connive at or tolerate wrong and outrage of such flagrant character." In defiance of President Roosevelt’s closing of the Indianola post office, the white citizens established their own post office at Heathman Plantation, four miles outside of town. A storefront was rented to serve as an unofficial mail distribution center, and Indianola’s white businesses even printed new stationary with ‘Heathman’ as the return address. The official post office in Indianola remained closed until 1904, when Minnie Cox's regular term expired, after which she refused to accept another term as postmaster. For her own safety, Cox fled Indianola during the dispute. The same year (1904), the virulent white supremacist James Kimble Vardaman began his term as governor of Mississippi. Vardaman finally won the race for governor after two previous attempts. Known as "The Great White Chief," Vardaman was in many ways quite progressive for his time. For example, he supported women's suffrage and child labor laws. He never relaxed his views on race, however, and never forgave President Roosevelt for his intervention in Mississippi.

In time, tensions eased and life returned to normal in Indianola, especially following Teddy Roosevelt's visit to Mississippi, during which the famous “Teddy Bear” hunt occurred. Minnie Cox returned to Indianola in 1904, along with her husband Wayne. The couple founded the Delta Penny Savings Bank, a prosperous endeavor which attracted both white and black investors. Hit by the approaching Depression, however, the bank failed on January 7, 1928. Meanwhile, the couple was engaged in other successful businesses. In 1909, Wayne and Minnie Cox helped organize the Mississippi Beneficial Insurance Company, believed to be the first black-owned life insurance company. In the 1920s, Minnie Cox moved to Memphis and later to Rockford, Illinois, with her second husband, George Key Hamilton, who she married in 1925. The Cox’s Indianola home, located in a present-day city park, was demolished in 1960. The park is now known as 'Minnie Cox Park’ and the current Indianola Post Office (above), built in 1935, is now appropriately named for Minnie Cox.