McAlister's Deli: Sweet Tea in the Heart of Dixie 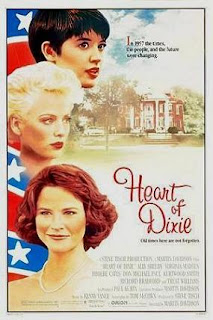 In 1989, Martin Davidson, a New York native and a graduate of the American Academy of Dramatic Arts, directed a film which focused on race and society in the 1950s. Previously, Davidson had won acclaim for directing the 1972 film The Lords of Flatbush. Heart of Dixie starred Ally Sheedy, Virginia Madsen and Phoebe Cates. Set in Alabama, the plot centered on Southern belle Maggie DeLoach (played by Ally Sheedy) and her sorority sisters at a fictional university who begin to sense the changing social order and their place in the “new” South. Released in August 1989, Heart of Dixie generated generally good reviews. For example, the New York Times found the film to be a “clear-eyed, funny and affecting movie.” Others thought it lacked focus (and some, not surprisingly, found the “Southern” accents to be a bit much). Unlike the New York Times, a reviewer at The Washington Post hated it. "Ally Sheedy, Virginia Madsen and Phoebe Cates combine their negligible talents in Heart of Dixie," the Times wrote, "a melodrama so full of hams, it oinks." On the whole, though, Heart of Dixie was fairly well received, though it certainly did not win any awards.

The screenplay for Heart of Dixie was based on a book by author Anne Rivers Siddons (right) titled Heartbreak Hotel, published in 1976. The book was Siddons’ first novel and was based on her real-life experience at Auburn University. At Auburn (then officially known as Alabama Polytechnic Institute), she was a member of the Delta Delta Delta Sorority and (no doubt) enjoyed her time there. However, she was also a bit of a “rebel” on campus, at least as far as race was concerned. As a columnist for the student newspaper, The Auburn Plainsman, she was outspoken in favor of integration. The administration at Auburn tried to suppress her column and ultimately removed her from the paper, but the incident drew national attention. After graduation in 1958, she became a senior editor for Atlanta magazine and published her first book in 1974. Another novel, The House Next Door, was made into a Lifetime television movie in 2006. A horror story, The House Next Door was praised by none other than Stephen King. Siddons continues to write, most recently publishing Sweetwater Creek in 2005, set in the low country of South Carolina.

Although the movie Heart of Dixie was set on the fictional Randolph University campus in Alabama, many of the film locations were in Mississippi, most notably on the campus of the University of Mississippi and in and around Oxford. Among the movie locations was an old gas station about a mile from the Ole Miss campus which was converted for the film to a 1950s diner. After the filming had been completed, a local dentist named Don Newcomb (left) purchased the property. A native of Ripley, Mississippi, Newcomb had worked as a teenager at a soda fountain in his hometown before attending school at Ole Miss, where he earned a degree in dentistry. After serving in the U.S. Navy, Newcomb established his dental practice in Oxford, but he was also involved in other buisness interests, including a couple of local restaurant franchise operations. In 1987, when Heart of Dixie was filmed, Dr. Newcomb saw an opportunity to start his own restaurant in the converted gas station and two years later, along with his office manager, Debra Bryson, and two sons, Newcomb opened the 'Chequers' restaurant. The name was too much like the 'Checkers' restaurant chain, however, so Newcomb changed the name in honor of his wife's parents. He called it McAlister's.

McAlister’s Deli was a instant hit with Ole Miss students and became a popular local eatery. Featuring a more upscale version of fast food and focusing on sandwiches and salads (but known especially its sweet tea), the restaurant retained many features of the original gas station. In 1992, Newcomb opened a second store in another college town, Hattiesburg, and a year later added another one in Tupelo, where there was a branch Ole Miss campus. In 1995, the Tupelo store became the first franchise McAlister's location (opened by a doctor from Oxford and a businessman from New Albany).  Three years later, the company was purchased and became the McAlister's Corporation and moved its headquarters to Ridgeland. Since then, McAlister's has grown to more than 300 locations in 23 states, ranging as far west as New Mexico and as far north as Indiana. The restaurant has also expanded into the college food service market and into shopping mall food courts. The prototype of the smaller-sized McAlister's Select was opened in Ridgeland's Northpark Mall in 2002. Although Dr. Newcomb and son Chris Newcomb remained with the corporation for a number of years, they have since left to pursue other opportunities, including Newks Eatery, founded in 2004 by the Newcombs and Debra Bryson. After opening the first Newk's in Oxford, the chain has since expanded to almost thirty locations across the South.


From from its origin in an abandoned gas station in the "heart of Dixie," McAlister's Deli has proven to be a huge success. Based on that success, there is no reason to think Newk's won't be just as popular.